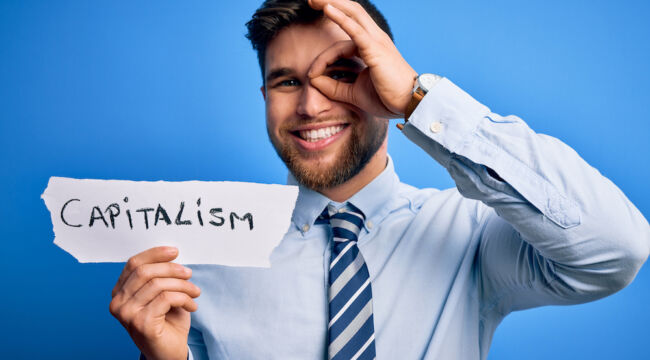 I’M coming out with a new book soon, called Life After Capitalism.

To entitle a new economic theory, “Life After Capitalism” seems a melodramatic stretch. Like “life after birth” or “life after sex” or “capital after COVID.”

After all, without capitalism, we would not have a world economy or a population of billions.

Over the last two centuries, and arguably long before, free capitalist systems, spreading around the globe, have enabled virtually all growth of economies and peoples.

Unless we accept the self-defeating follies of “sustainability” or the Silicon Valley fantasies of “machine minds” taking over from humans, the horizons of human possibility remain limitless.

What’s become “unsustainable” is the idea that capitalism can thrive without faith in the future — that we can subsist on a long slippery slope of cautionary paranoia about disease, population, climate, and chemistry.

Yet something is going wrong in the world economy.

In the face of massive technological progress, the damage sometimes eludes the tools of contemporary economics. Technology has even covered up much of the damage from the insane political response to the threat of a routine virus.

While lacking so much as a clue to what is going on, the politicians of the world are all mimicking King Canute, promising to hold back the tides, control the weather, stomp out viruses by law, and print prosperity.

My regular readers know that measured by time-prices — the hours and minutes a worker needs to spend earning the money to buy the goods and services of his life — today’s living standards mean we’re living in a golden age of capitalism.

The data collected by economists Gale Pooley and Marian Tupy in their soon-to-be-published book and on their website, are conclusive. For nearly a century and a half, true economic growth measured in time-prices has been rising at close to 4% a year.

In face of all the inflation and devaluation of money and runaway debts and subzero interest rates, the growth rate may have even increased. The spearhead has shifted from California to China, India, and even Africa — but time-prices shrink everywhere entrepreneurs are permitted to invent and create.

From having to spend every waking hour chasing and collecting food to live, a typical human today earns his food in a matter of minutes. This capitalist creation of ever greater abundance in ever shorter time continues despite academic denials, political upheavals, and doomsday Adventists on the mountaintops of the media.

Nonetheless, because virtually no one — even the leading advocates of capitalism — have any real understanding of the sources of their good fortune, they are in danger of letting it slip away.

Disabling capitalist principles and institutions is an acute cognitive dissonance. It springs from a divergence between the ideologies and practices of capitalism.

This divergence did not begin with the Obama administration or the Trump presidency, the Gates Foundation or George Soros, or the Chinese Communist Party.

That’s the thesis of Life After Capitalism, my forthcoming book which I should finish over  the next month or so.

The Critical Error of Capitalist Theory

This crucial cognitive dissonance in capitalism pervades the entire literature of economics.

It arose at the time of Adam Smith in the Wealth of Nations (1776). Suggesting an upper-class disdain for “men in trade,” Smith expressed his own cognitive dissonance — his belief that free enterprise can prosper even while actual enterprisers “never gather without conspiring against the interest of the public.”

Compounding Smith’s suspicion of capitalists was his envy of Newton’s physics of a century before.

Smith expressed a belief that an economy is analogous to “a great machine with every part adjusted with the nicest artifice to the ends they are intended to produce.”

Smith, however, did not name the system “capitalism” or define its operations in terms of economic classes. That was left to Karl Marx in Das Capital.

Detailed in four dense volumes, with the first published in Germany in 1857 and the rest edited from his notes by Friedrich Engels, Marx’s work is still the most cited book in the social sciences published before 1950. And it followed Smith in an attempt to anchor capitalism in materialism.

At the heart of the prevailing capitalist theory is a system of incentives and responses by homo economicus, seeking pleasure and recoiling from pain, accumulating rewards and shunning penalties.

Homo economicus is a function of his material environment and is motivated by his appetites, widely depicted by the pejorative of his “greed.” Even great capitalist writers, from Smith to Ayn Rand, accept this image.

The mistake is fundamental and affects the very origins of the name. Marx defined capital as embodied in machines and resources. But in fact, the word and the system derive from the Latin word caput, meaning head.

Capitalism Is About Information, Not Things

Life After Capitalism will show that free enterprise is actually a mind-centered system, that material resources are essentially as infinite as the atoms in the universe, and that what governs economic growth is human creativity, in the image of the creator.

Creativity is not a machine; it is a miracle of the mind, measured by its surprising outcomes.

In my older book, Wealth and Poverty, I showed that “greed, as by an invisible hand, actually leads to an ever-growing welfare state — to socialism, not freedom.

In Life After Capitalism, I will explain how economics is not an incentive system but an information system.

To understand it fully and measure its effects, you have to use the science of the 21st century economy, reaching from physics to biology, computer technology to biotech, from networks to industrial design.

That science is Information Theory.

Developed in its mathematical form first by Claude Shannon who defined the bit and the byte, it underlies and explains nearly all the technologies of the modern economy. It is crucial to the processes of investment and even the definition of wealth and growth and money.

It defines information as a creative process, not as order. It permanently refutes the idea of an economy as a great machine or a class struggle over material resources. It enshrines an economy of mind.

By banishing greed as a driving force, materialism as a philosophy, and class struggle as a principle, it permanently banishes Marx and transcends the critical cognitive dissonance that reverberates through our economy and society today.

This new theory of economics also represents a breakthrough in the theory of investment.

It will be an exciting and I hope rewarding adventure in ideas.