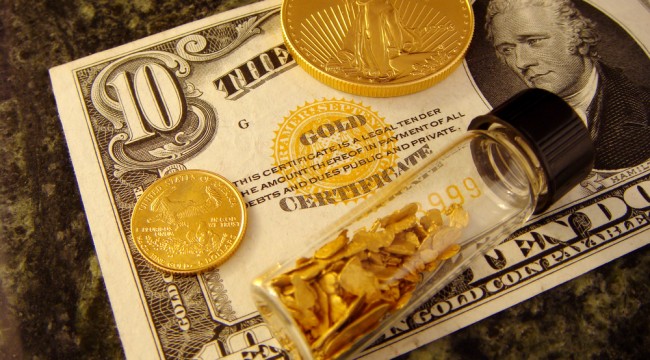 The U.S. trade deficit swelled to its highest level in six months, according to the Commerce Department’s July report. The deficit, at $45 billion, is 12.1% higher than in April. Economists at Barclays said the higher deficit led them to downgrade their growth forecast for the second quarter to 1%, from 1.6%, according to The New York Times.

Most economists are citing normal economic fluctuations as the reason for the deficit increase. Lewis Lehrman, author of seminal classic The Case for Gold , gave us a view of the larger picture during his lecture on the history of U.S. monetary policy at the Cato Institute yesterday.

Lehrman, a tireless advocate of the gold standard for the last four decades, cites the end of the Bretton Woods agreement, described by Lehrman as “the last vestige of monetary restraint” in 1971, as the beginning of runaway deficits in the U.S.

Since 1971, average real wages per hour of work in the U.S. have been stagnant. Average real economic growth has been about half of what it had been. The purchasing power of a 1971 dollar has declined to about 15 cents. Contrary to conventional opinion in 1971, the dollar has continued to be the world’s reserve currency, leaving us with enormous trade and budget deficits, a condition Lehrman calls the “reserve currency curse.”

As Addison Wiggin pointed out in The Daily Reckoning on July 10 : “The U.S. trade deficit with China was less than $50 billion in 1997. By 2006, it swelled to $234 billion… If we still had a gold standard — or even the Bretton Woods system in place between 1944-71 — such yawning trade gaps would be impossible. The flows of gold between creditor and debtor nations would, naturally, maintain an equilibrium.”

Self-restraint is not something governments have historically done well. The advantages of fiat money must be carefully weighed against the obvious consequences. The endless bubble growth and decline created by central bankers is a reality you, the investor, will be dealing with for many years.

“The consequences of the collapse of money worldwide are still unfolding,” Lehrman concluded. “Let it be truly said that only one century of post-World War I financial disorder has been written. Now the question is what is to be done?”

[Ed note: Members of the Laissez Faire Club will receive a free copy of Lewis Lehrman’s The True Gold Standard as a benefit of membership. Please review the following invitation and see if membership is right for you.]

P.S. Daily Reckoning readers get regular tips on how to protect themselves from the folly of central banking. Subscribe for free by clicking here.

Jerome Powell Is Between A Rock And A Hard Place

Nomi Prins reveals why Federal Reserve chairman, Jerome Powell is currently positioned in a dangerous catch-22 for the economy… Here’s how it could impact the financial system and your money in the weeks and months ahead…