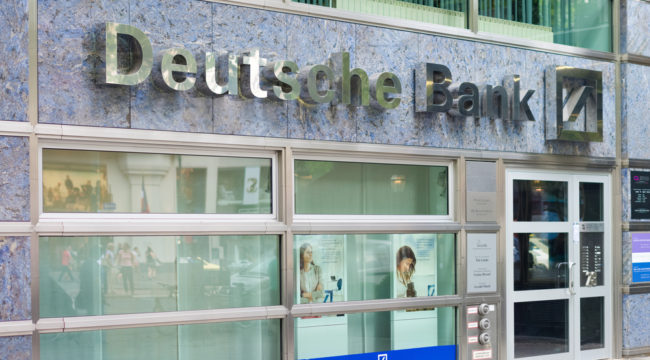 A “Lehman Moment on Steroids”

Lehman got hauled off to the boneyard eight years ago this month. Cause of death: the subprime mortgage crisis. And its shade has been spooking the markets ever since.

Lehman succumbed to a classic bank run. The Journal puts it thusly: “Lehman failed the way all banks fail: It ran out of cash and liquid assets it could quickly sell to pay clients and counterparties as they ran for the exit.”

Now Deutsche Bank is in a similar fix.

Jim Rickards often speaks of the “snowflake” that can trigger an avalanche. Any individual snowflake is a nothing in itself. But when the snow builds high enough, it just takes that one last flake to bring down the mountain.

Could Deutsche Bank be the snowflake that triggers another 2008-like avalanche?

Lehman was leveraged 24:1 at time of death. But Deutsche Bank’s leveraged more than 40:1 today. That’s at least 40 claims on every buck in the vault. If everyone demands theirs at once, all but one go scratching. And the bank…rupts.

Then two weeks ago, the U.S. Justice Department “proposed” the bank fork over $14 billion for its role in the 2008 mortgage crisis. That sparked fears it could clear the bank’s thinly capitalized cupboards.

And that’s got lots of folks nervous.

“Why would you keep collateral with Deutsche Bank right now?” asks Raoul Pal, independent researcher and harsh critic of the bank. “If you are a hedge fund right now, you start pulling lines and go somewhere else.”

“It is all about confidence now,” adds Julian Brigden of Macro Intelligence 2 Partners, an independent research company dealing with hedge funds. “If a client has some derivatives at Deutsche Bank, he starts to think — will I get paid?” Then he puts the hammer on the nail:

“Things can get out of hand quickly.”

The IMF let Deutsche Bank have it good and hard this June, saying it “appears to be the most important net contributor to systemic risks.”

At one point, Deutsche was mixed up in $72 trillion of derivative financial instruments — about a quarter of total global exposure.

“Unlike the collapse of Lehman Bros. in 2008, which the western central banks were able to contain thanks to $13 trillion in bailout funds,” Willie goes on, “a failure of Deutsche Bank would trigger a systemic banking contagion the likes of which the Western world has never seen.” (Emphasis ours.)

And that’s the risk in today’s hyperconnected Rube Goldberg contraption of a banking system. Start some trouble somewhere and it’s out of control in two seconds flat.

A picture is worth 72 trillion words: 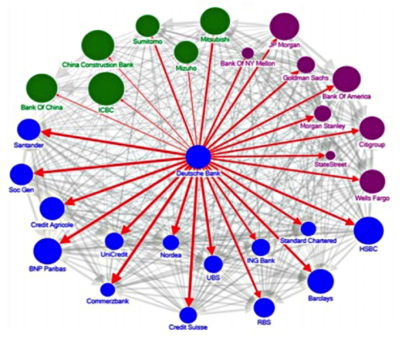 Jim Rickards has noted that Deutsche Bank’s derivatives exposure is down from a comic-worthy $72 trillion to (only!) $42 trillion. Isn’t that good? Less exposure, less counterparty risk?

No, says Jim. It’s actually not. It’s a disguised bank run: “That means counterparties are already terminating and replacing contracts. There’s a silent run on the bank already.” Jim likens the situation at Deutsche Bank to a “Lehman moment on steroids.”

Sure, they’ve gotten to borrow money for next to zilch. But the blade slices both ways. Ultralow interest rates have limited what they make on loans and earn on their other investments. That’s cut into profits. And it’s left them less cushion to meet a crisis. Banks with falling earnings also have gone further out on the risk branch in the search for yield.

In short… Zero rates make the system less stable over time. Not more.

He said that in May 2013. It’s now going on eight years that interest rates have been at or near zero.

And a lot more snowflakes have piled atop the mountain… just waiting.