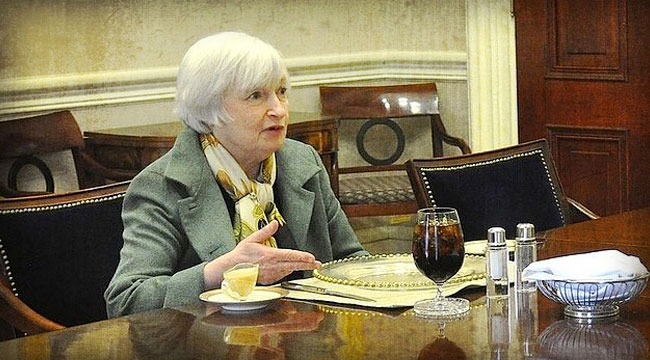 Nicolas Chamfort (1741-1794) was a French writer renowned for his epigrams and aphorisms. A colourful character who was for a time secretary to Louis XVI’s sister, he believed that “the most wasted day of all is that on which we have not laughed.”

His Maximes et Pensées was highly praised by John Stuart Mill and, along with François de La Rochefoucauld’s Memoirs, Maximes and letters, is considered to be one of the most brilliant collections of sayings of the modern era. (They include: “All that I’ve learned, I’ve forgotten.

The little that I still know, I’ve guessed”; “Public opinion is the worst of all opinions”; and “A man should swallow a toad every morning to be sure of not meeting with anything more revolting in the day ahead” — such as an unpleasant client, vicious partner or an obnoxious boss.)

I take laughing very seriously. I usually start my day by reading the latest comments by one or other central banker, which make me laugh as much as watching Candid Camera. (Will Rogers: “I don’t make jokes. I just watch the government and report the facts.”)

The other day (April 2, 2015), I read from Reuters that Fed chair Janet Yellen had opined: “More research is needed to understand what policies allow people to move up the economic ladder and what holds them back.” More research, she said, may provide evidence of what allows people to get ahead, and to predict how individual circumstances impact income inequality.

Specifically, Ms. Yellen said: “It would also be beneficial to understand whether any policies may hold people back or discourage upward mobility” and “Research could help us better understand how much mobility at the individual level matters for overall growth in productivity and economic output.”

I had to laugh almost as much as when I read that Securities and Exchange chairwoman Mary Jo White announced that the SEC is committed to independently formulating a unified “fiduciary standard” that requires all financial intermediaries to put their clients’ interests before their own.

I wonder when — not just in the age of capitalism, but throughout the entire course of human history — anyone has put his clients’ interests before his own? (I should point out that most hedge funds have their own interests closely aligned with their clients’, because their partners are usually not only large investors in the fund but their earnings are also largely determined by their performance and the related fees.)

As far as Yellen’s research on wealth and income inequality is concerned, my readers can rest assured that it will be published by some Fed-friendly (read “recipients of Fed consulting fees”) academics, who will conclude that monetary policies haven’t contributed to rising wealth inequality.

I have written about wealth inequality sufficiently in the past and won’t repeat myself here, except to reiterate once again that when asset bubbles burst they impoverish the majority while benefiting a few market participants. Furthermore, empirical evidence shows that periods of high monetary inflation (money printing) enrich a tiny minority and not the majority.

“Even though wages are improving, the rate of growth in what companies pay employees pales in comparison to what stocks have handed investors over the last six years. In fact, with equities rising 20 percent annually and wages up 2 percent, the gap has never been wider in any bull market since 1966.

“While comparing salary and stock returns has its imperfections, the figures are revealing in a country where six years of cost cuts helped double the Standard & Poor’s 500’s earnings and add $12 trillion to shares. The divergence is a concern when Federal Reserve data show the percentage of families owning stock fell to 48.8 percent in 2013 from 53.2 percent in 2007.

“‘Earnings have been so strong in part because wage growth has been so weak,’ said Mark Zandi, chief economist at Moody’s Analytics Inc. in Philadelphia. ‘The benefit of any productivity growth is going right to corporate earnings and to shareholders.’

“To be sure, record stock prices have helped enrich U.S. households, with net worth climbing to a record $82.9 trillion in the fourth quarter. But it’s a benefit that’s not broadly shared. Among the worst-paid Americans, less than 30 percent of families invest in stocks, compared with 92 percent for the richest, the Fed’s September survey shows.”

Bloomberg also quotes Michael Shaoul (I visited Israel recently with Michael, who is CEO of Marketfield Asset Management, worth US$10 billion), who opined that the gap between wages and stocks since 2009 is partly a statistical illusion that reflects the severity of the bear market and how little wages fell during the credit crisis.

According to Shaoul, a comparison of their respective growth rates since 2000 or 2007 (I should point out that these were peak years in stock prices) shows pay rising more closely with shares. As with all statistics, he says, “A lot of this depends on starting points…. Time is the main ingredient missing with regards to this wage cycle. Many factors are coming back into the employees.”

I fully agree with Shaoul that all statistics depend for their meaning “on starting points.” Furthermore, statisticians can show anything they want with statistics, but I need to remind Shaoul that we can take practically any starting point over the last 50 years and show that an inflation-adjusted total return index (including the reinvestment of dividends) has vastly outpaced real median wage growth.

Furthermore, it is easy to show that, even in nominal terms, wages haven’t kept pace with the rise in the S&P 500 Index (not the total return index, which would include dividends) if we look at how many hours of work are needed to buy the S&P Index. 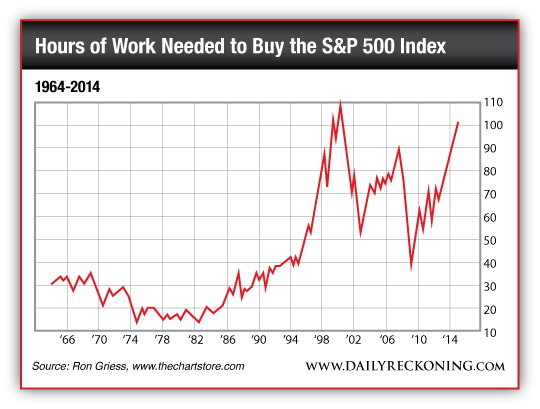 From the figure, it is clearly visible that, aside from the 1966-1982 period when workers had the upper hand because their wages rose while the S&P 500 was flat and declined in real terms, workers’ salaries haven’t kept pace with the rise in the S&P Index (and even less so with the S&P inflation- adjusted total return index).

So, as much as I like Michael Shaoul, as much as we enjoyed travelling together through Israel and on to Petra (Jordan), and as much as I agree that with statistics everything “depends on starting points,” in this particular instance all the evidence would suggest that part of the wealth inequality can be explained by the huge asset inflation we have had since the early 1980s.

As an aside, according to Agence France Presse, the Labor Department just reported that Americans on average saw income decline for the second straight year in the 12 months to June 2014.

“The average pre-tax income fell 0.9 percent from the same period a year earlier, to $64,432. But broken down into quintiles, those in the top 20 percent of incomes saw their money stream grow by 0.9 percent to $166,048 on average. Every other group lost ground, with the bottom 20 percent losing the most: their average income dropped 3.5 percent to $9,818.” These are facts, and they don’t depend on any starting points, as Shaoul maintains.

It is commendable that the Fed has decided to sponsor more research on wealth and income inequality — and is well understood 20 years after income and wealth inequality began to increase sharply.

Now, we at least know what Fed chair Yellen means when she says that the Fed’s policies are “data dependent.” (William Dudley commented in regard to increases in the Fed Fund rate: “How we react after lift-off is going to depend on the market reaction that we get.”)

But I shall now get to the point I really wanted to make about Fed- sponsored research and the Fed’s consultants. I am on the board of several companies and I am amazed at the number of consultants, lawyers, accountants, and auditors a company has to employ in order to be compliant with all the regulations. Similarly, a fund manager has to spend an enormous amount of time in order to be recommended by consultants such as Cambridge Associates.

Now, it seems to me that this entire consulting business is largely driven by increasingly complex laws and regulations, which frequently change, as well as by people who are no longer willing to take personal responsibility for their actions.

In fact, people frequently cannot assume responsibility for taking their own decisions, without employing consultants to do so on their behalf, simply because they would then open themselves to the potential for some serious litigation by disgruntled shareholders or government regulators.

But, as the American poet and essayist Adrienne Cecile Rich (regarded as one of the most influential poets of the second half of the 20th century) opined, “Responsibility to yourself means refusing to let others do your thinking, talking, and naming for you; it means learning to respect and use your own brains and instincts; hence, grappling with hard work.”

My point is this: Regulation an a jungle of laws increase the cost of doing business significantly and are stifling overall economic growth.

P.S. Please visiting Dr. Faber’s site to learn how to read all of his work at the Gloom, Boom and Doom report.