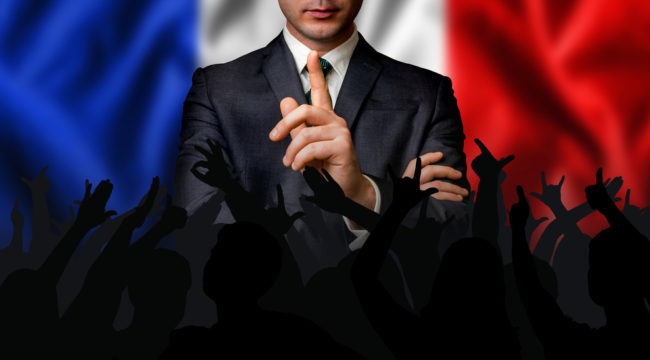 “Of course Marine Le Pen is going to win, and thank God… France needs Marine Le Pen… like America needed Trump to put some order in the White House and the country.”

We did something Friday we’ve never done before…

We offered readers a free trade… compliments of the house… no subscription required on any of our fancy trading services.

If Marine Le Pen won yesterday’s election in France, the trade could have potentially paid up to 900% — in just a couple of weeks.

Our reasoning: Le Pen was such a dark horse, such a bare possibility… that any intrepid soul willing to try his luck on her should reap a windfall.

But a ghost got into our machinery Friday afternoon.

And we couldn’t push the issue out in time for readers to book the trade.

The delay spared the reader who authored the above prediction any temptation to put his money where his mouth was.

Or anyone else whose competitive spirits we may have tickled.

Her opponent, centrist “independent” Emmanuel Macron, ran away with it, 66%-34%.

And the trade is down nearly 90% since Friday.

There’s still a chance it’ll rebound to near breakeven by May 19, when the option expires.

But no 900% gain. Which is something of a relief to our troubled conscience. Imagine coming on today trying to explain how our tardiness cost you a shot at 900%?

(Would you have made that trade Friday afternoon had you received the issue in time? Let us know. And be honest! dr@dailyreckoning.com.)

But Jim doesn’t shock for the sake of shocking. And this time he found himself swimming in the mainstream, paddling right alongside Mr. Establishment:

“Let me be perfectly clear,” Jim came out flat-footed in Friday’s reckoning. “I fully expect Macron to win this Sunday. I think the polls have it right this time.”

How was today’s market reaction to Macron’s win?

In a word… subdued.

The Dow was up a slender five points. The S&P couldn’t even scratch out one full point today. The Nasdaq couldn’t manage two.

Macron’s win was already “baked in the cake,” as the saying has it.

Any surprise would have been on the downside.

On the other hand, the euro notched a six-month high against the dollar today — $1.093.

Is the great populist tide that swept Britain out of the European Union and Donald Trump into the White House… receding?

The Netherlands rejected a nationalist candidate in March. Now France has done the same.

Bloomberg bleats (or gloats?) that “Macron’s decisive triumph over the anti-euro Marine Le Pen will strengthen the EU and deal a blow to the populist wave that has roiled Western democracies for the past year.”

Just so. And we would never bring Bloomberg’s Solomonic wisdom into question.

But isn’t a populist wave, by definition… democratic?

Then there’s Politico, purring with a special relish of its own:

It’s undeniable that by elevating an unabashedly pro-EU liberal to its highest office,   France wanted to send a clear message to the world that it rejects the nativist instincts that have taken hold in other parts of the West.

But if France wanted to send a clear message, plenty of French voters didn’t get it.

Voter turnout was apparently 65.4% — the lowest turnout since the second round of the 1981 election.

One pre-election poll indicated 32% of voters planned to boycott the election.

That’s the largest electoral boycott in French histoire, according to Jerusalem Online.

So the clear message France sent seemed more a shrug of the shoulders than anything else… according to our lights anyway.

Le Pen was too radical for most. Macron was a cipher, just too dull to coax the average voter off the couch.

But the combined armies of the French establishment had it in for Le Pen.

So Macron won the franchise of the majority that did turn out.

If France doesn’t surprise them… if France fails to offer them a new hope, a new humanism, a safer world and the glory of God to boot… then maybe the next election goes differently.

If this Macron fellow flops on the job, maybe it wins outright next time.

And maybe we’ll offer another free trade that could actually make our readers 900% — in time for them to book it, too…