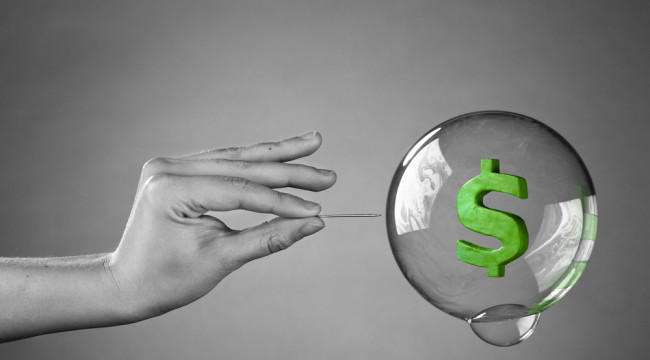 The graph below belongs in the “what were they thinking category”.

After Tuesday’s dividend massacre, it’s plain as day that Kinder Morgan (KMI) wasn’t the greatest thing since slice bread after all. That is, a “growth” business paying rich dividends out of rock solid profit margins and flourishing cash flow.

In fact, it was just a momo stock on a borrowing spree.

During the 27 quarters since the beginning of 2009, the consolidated entities which comprise KMI generated $20.8 billion of operating cash flow, but spent $24.3 billion on CapEx and acquisitions.

So the “growth” side of the house ended-up in the red by $3.5billion. Presumably that’s because it was “investing” for long haul value gains.

But wait. It also had to finance those juicy dividends, and there was a reassuring answer for that, too. The payout was held to be ultra safe owing to KMI’s business model as strictly a toll gate operator in the oil and gas midstream, harvesting risk-free fees from gathering systems, transportation pipelines and gas processing plants.

Accordingly, even when its stock price was riding high north of $40 per share, the yield was 5%. So over the last 27 quarters KMI paid out $17.3 billionin dividends from cash it didn’t have.

It borrowed the difference, of course, swelling its net debt load from $14 billion at the end of 2009 to $44 billion at present. And that’s exactly the modus operandi of our entire present regime of Bubble Finance.

Kinder Morgan is the poster boy. 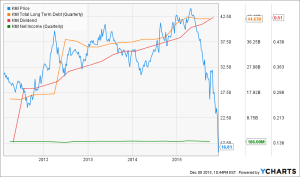 Yes, you can chalk this off to another “lesson learned” in the Wall Street casino. After all, some definable group of investors and speculators thought they owned $98 billion of market cap a few months ago, and now their accounts are suddenly $60 billion lighter—–including about $7 billion of bottled air that evaporated from the net worth of its founder and indefatigable promoter, Richard Kinder.

But in the alternative, perhaps its time to recognize that healthy, properly functioning free markets do not make egregious $60 billion “mistakes”  such as this one over and over. What surely led to the insane peak valuation of KMI is the relentless scramble for yield that has been triggered by 84 months of ZIRP and endless coddling of the stock market by the Fed and other central banks.

The fact is, during the last 31 quarter (i.e. since Q1 2008) KMI has posted the grand total of $900 million in cumulative net income. This means that at its peak April valuation it was trading a 100X the totality of what it had earned during nearly an entire decade; and that during that period it paid out 17 times more in dividends than it earned.

That’s right. The Wall Street gamblers and punters had followed the pied piper of Houston right out of Enron, and into an even greater bubble predicated on the same old scam.

Indeed, KMI is a pipeline company just like Enron. It’s original building block, Enron Liquids Pipeline, was purchased by Richard Kinder and his partner for $40 million back in the late 1990s.

Yet it had no more chance of being worth $100 billion than Enron had of being worth $60 billion before its implosion. It didn’t even have the razz mataz of a fiber optics trading business or a franchise to bring power and light to impoverished villages of India.

The apologists are want to argue, of course, that net income doesn’t mean anything when it comes to valuation. Perhaps we should therefore dispense with the several billions spent annually by the SEC, DOJ and sundry state attorneys general hauling business executives to court and jail for violating GAAP.

On the other hand, there is a reason why GAAP accounting statements require that asset write-offs, goodwill impairments, restructuring charges and stock option costs be charged to net income. At one point or another every one of these charges involved the waste of cash or other corporate assets.

They are not merely “non-recurring” expenses. They always and everywhere generate a recurring loss of value because these charges reflect a business mistake or the impact of Mr. Market’s penchant for “creative destruction”.

Even then, clamber on board with the LBO boys and consider the LTM results for KMI on a so-called cash flow basis. During the year ended September, it posted $5.89 billion of EBITDA and spent $3.9 billion on CapEx and $1 billion on acquisitions. So its free cash flow was a round $1 billion.

If you have another pipeline company in Houston, I’ve got some swampland in Florida that I will swap for it.

If not, at least believe this. Two decades of Wall Street coddling by the Fed and 84 months of free carry trade money means that the casino is riddled with momo plays and debt-fueled scams like Kinder Morgan.

Now would be an excellent time to get out of harm’s way—–as any sensible KMI shareholder would have done long before Bloody Tuesday.