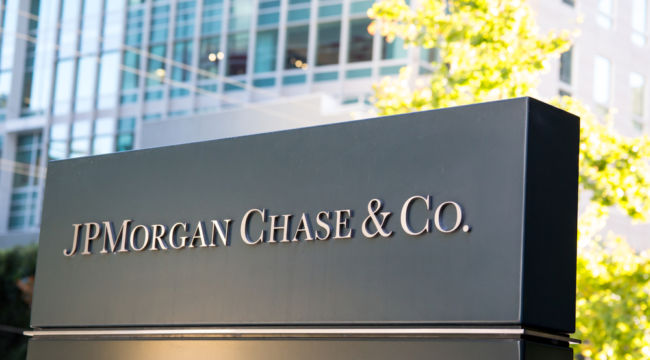 What caused the overnight lending market to unexpectedly seize up in September? There’s good reason to believe JPMorgan Chase (JPMC) may have been at the heart of it.

JPMorgan Chase is the largest bank in the U. S., and has about $1.6 trillion in deposits. It’s one of the big banks that provide much of the loans in the overnight money markets.

But it seems the mega-bank had gone on a stock buyback spree from January through September of this year.

Buybacks, which are designed to boost stock prices, have been enabled for years by the Fed’s artificially low interest rates. Corporations in fact have been the largest purchasers of stocks, which is heavily responsible for the bull market that’s now over a decade old.

According to the SEC, JPMC has spent about $77 billion on buybacks since 2013.

But the money JPMorgan Chase used for buybacks on its most recent buyback binge was therefore unavailable to be loaned out in the repo market.

This information is from the bank’s annual SEC filing (hat tip to the Wall Street on Parade blog):

In 2019, cash provided resulted from higher deposits and securities loaned or sold under repurchase agreements, partially offset by net payments on long-term borrowing… cash was used for repurchases of common stock and cash dividends on common and preferred stock.

That diversion of money likely contributed to the liquidity crunch, which forced the Fed had to intervene in order to make up the difference.

Here’s how Wall Street on Parade sums it up:

Had JPMorgan Chase not spent $77 billion propping up its share price with stock buybacks, it would have $77 billion more in cash to loan to businesses and consumers — the actual job of its commercial bank. Add in the tens of billions of dollars that other mega banks on Wall Street have used to buy back their own stock and it’s clear why there is a liquidity crisis on Wall Street that is forcing the Federal Reserve to hurl hundreds of billions of dollars a week at the problem.

JPMorgan Chase has a long history with financial markets and bailouts, going back to J.P. Morgan himself.

From the late 1890s on, J.P. Morgan was the most powerful banker on the planet and was called upon multiple times to bail out a country on the economic edge.

In 1907, Treasury Secretary George Cortelyou provided him with $25 million in bailout money at the request of President Theodore Roosevelt to stabilize Wall Street and calm frantic citizens trying to withdraw their deposits from banks around the country.

And this Morgan did — by helping his friends and their companies, while skimming money off the top himself. As for the most troubled banks holding the savings of ordinary people?

The leading bankers who had received that bounty from the government went on to cause the Crash of 1929. Not surprisingly, much speculation and fraud preceded it.

In those years, the novelist F. Scott Fitzgerald caught the era’s spirit of grotesque inequality in The Great Gatsby when one of his characters comments: “Let me tell you about the very rich. They are different from you and me.”

The same could certainly be said of today when it comes to the gaping distance between the have-nots and have-a-lots.

In the wake of the global economic meltdown, however, the Fed took it upon itself to reduce the cost of money for big banks by chopping interest rates to zero (before eventually raising them to 2.5%) and buying $4.5 trillion in Treasury and mortgage bonds to lower it further. All this so that banks could ostensibly lend money more easily to Main Street and stimulate the economy.

But it never really happened. The economy has been treading water ever since (especially compared to the stock market).

Annual gross domestic product (GDP) growth has not surpassed 3% in any year since the financial crisis, even as the level of the stock market tripled, grotesquely increasing the country’s inequality gap.

None of this should have been surprising, since much of the excess money went straight to big banks like JPMC, rich investors, and speculators.

They then used it to invest in the stock and bond markets, but not in things that would matter to all the Americans outside that great wall of wealth.

The net result: an acute post-financial-crisis increase in wealth inequality — on top of the income inequality that was global but especially true in the United States. The crew in the top 1% that doesn’t rely on salaries to increase their wealth prospered fabulously.

They, after all, now own more than half of all national wealth invested in stocks and mutual funds, so a soaring stock market disproportionately helps them. It’s also why the Federal Reserve subsidy policies to Wall Street banks like JPMC have only added to the extreme wealth of those extreme few.

Meanwhile, the bottom 90% are the lucky owners of about three-quarters of the country’s household debt. Mortgages, auto loans, student loans and credit-card debt are cumulatively at record levels.

What we’ve seen ever since is how money just keeps flowing upward through banks and massive speculation, while the economic lives of those not at the top of the financial food chain have largely remained stagnant or worse. The result is, of course, sweeping inequality of a kind that, in much of the last century, might have seemed inconceivable.

But eventually, we will all have to face the black cloud this throws over the entire economy. Real people in the real world, those not at the top, have experienced a decade of ever-greater instability, while the inequality gap of this beyond-gilded age is sure to shape a truly messy world ahead.

In other words, this can’t end well.