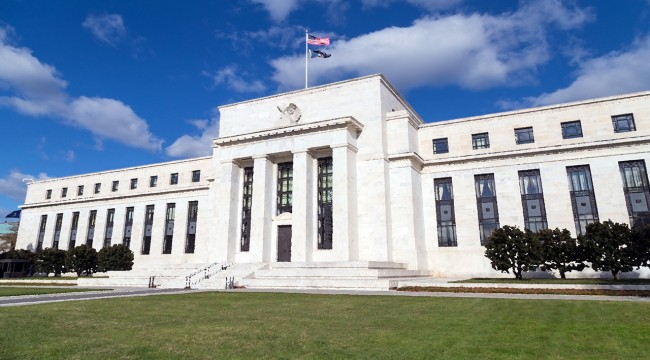 The 12 Apostles of the Keynesian faith huddled in prayer today, beseeching the Almighty for light… and guidance.

Should they raise the federal funds target rate another quarter point, to 1.75%?

Or should they leave it be — and abet further the deadly sin of greed?

Tomorrow at 2 p.m. EDT the holy bell will ring… and the announcement will come.

We don’t envy these 12 wiseacres, especially the apostle Peter of the bunch, Mr. Powell.

The poor fellow must feel the weight of worlds upon him.

It would crumple a Hercules.

What if he botches it?

On the one hand is the consensus argument, running roughly as follows:

The economy is high on its horse, unemployment scarcely has existence, signs appear of a percolating inflation.

Tax cuts will soon ripple through the economy.

And $300 billion of new federal spending over the next two years will lift the overall economic level.

The Federal Reserve needs to tighten up a bit, runs the argument, to stay ahead of things.

If it doesn’t raise rates, the economic machinery could overheat… and inflation could soon menace.

Against this clear sky the other hand draws a weather cloud…

The Atlanta branch of Federal Reserve Church has recently lowered its first-quarter growth estimate from a spiritous 3% annualized rate… to 1.9%.

Meantime, the world may soon embark on a trade war Bloomberg Economics estimates could cost $470 billion in global GDP.

Is this the smoke of an overheating economic engine?

Yes, the official unemployment rate is 4.1%.

But the February employment report also revealed that labor force participation hovers at 63% — not much higher than its post-financial crisis low of 62.6%.

We are further informed that retail sales slipped in February for a third straight month.

Now, we concede the subtleties of economic science may elude our slender understanding.

But if the labor scene is so pretty… shouldn’t retail sales be rising?

Inflation is astir, says the consensus. And the Fed must act now to keep it on its chain.

But as Jim Rickards notes, the Fed’s main inflation indicator — the core personal consumption expenditure (PCE) year over year — was 1.5% in January.

Where is the evidence of rising inflation?

By all rights inflation should be accelerating, driven by a tight jobs market strengthening further, a big stimulus hitting the economy and a weak dollar. But it isn’t.

Meantime, the Fed is in the process of drawing down its $4.4 trillion balance sheet.

Combine it with three or four actual rate hikes this year and Jim says it’s like going “cold turkey”:

The annual combined impact of the Fed’s rate policy and QT is a 2% increase in interest rates. For an economy addicted to cheap money, this is like going cold turkey.

Can markets — can the economy — take the chilled serving?

What if the Fed overapplies the dose?

Doesn’t it run the risk of causing the very recession or market crash it’s trying to skirt?

But if it abandons its tightening… would that not admit that the economy is much weaker than the advertising suggests?

And wouldn’t that admission itself panic the markets?

They must haunt the private moments of Jerome Powell… and poison his sleep.

“I am just a mortal man,” he surely reminds himself.

“So are the 11 other fallen human specimens with whom I share this grave responsibility.

Powell is a Republican, after all.

The old-time religion of honest money must somewhere be in him.

Or perhaps we are deluded.

We are all Keynesians now, Nixon famously declared.

It covers the entire mainstream spectrum, left to right, right to left.

Only the heretic — or the excommunicated — would let markets find their own way, at their own pace, under their own steam.

In short, to determine their own interest rates.

As the Fed prepares to raise rates tomorrow, we too bend our knee in prayer — praying it knows what it’s doing.

After all, sometimes prayer is all a fellow has…