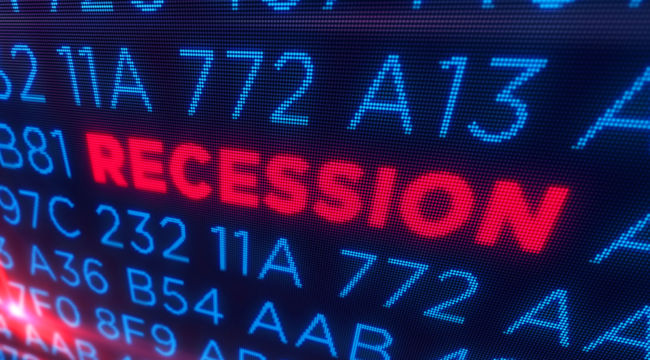 “It’s not the despair,” begins a line from the movie Clockwise.

“I can take the despair,” it continues. “It’s the hope I can’t stand.”

Once again the IMF has revised its 2019 global growth forecast — lower.

Previously 3.5%, its latest crystal ball gazing gives a reading of 3.3%.

It is the third downgrade in six months… and its lowest growth forecast since the financial crisis.

We anticipate another downward revision before long.

It was not long distant — 2017 — when the IMF was bugling sweet melodies of global “synchronized growth.”

But now, anno Domini 2019, it moans about an unfolding worldwide “synchronized deceleration.”

Imagine a weather man pounding his chest about the impending arrival of clear skies and pleasant temperatures.

The next day he announces pouring rain and cold.

A Record of Inaccuracy Second to Few

A Bloomberg analysis revealed, for example, that the IMF has overestimated growth 44% of the time since 1999.

And the IMF’s own fact checkers admit it has overshot U.S. growth 80% of the time.

What remains of the IMF’s tattered credibility… or its dignity?

We can only avert our gaze in embarrassment, as from a man whose cellphone rings just as the bride says “I do”… or a police chief caught with a prostitute… or a senator of the United States caught telling the truth.

Here is the IMF’s excuse for its latest botchwork:

Trade tensions increasingly took a toll on business confidence, and so financial market sentiment worsened, with financial conditions tightening for vulnerable emerging markets in the spring of 2018 and then in advanced economies later in the year, weighing on global demand.

If it is not one thing, it is the next. If not the next, then the next after.

But what if there never were any “synchronized growth” to speak of?

Perhaps it was all as illusory as ignis fatuus — swamp fire.

Let us step back for the moment… and take the long view.

The Great Financial Crisis dynamited a hole in the global economy, which has never been patched.

After a spasm of growth in 2010, it has failed to recapture its pre-crisis heights.

Between 1984 and 2007, according to the IMF’s numbers, the economies of the advanced world together averaged 3.05% growth (including recessions). Since 2010, they’ve averaged just 1.87% growth. The latest projections show this isn’t going to change.

Let Exhibit A go into the record: 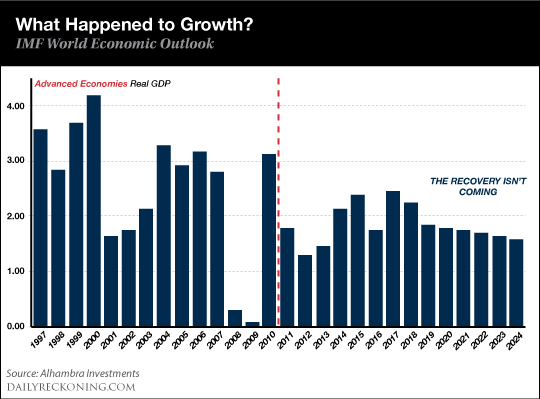 At first blush, 1.87% growth and 3.05% growth may not appear extremely distant — scarcely one percentage point separates them.

But multiply the difference over 10, 20, 30 years… and you have a slow-motion wreck on your hands.

Imagine for the moment the financial crisis never existed and Lehman Bros. was still a going concern.

Next assume the 3.05% average annual growth obtaining 1984–2007 maintained course and speed through to the present.

You now come to a dismal lesson in lost opportunity.

The world’s advanced economies would be some $7.7 trillion wealthier by Snider’s exacting calculation.

Extend the trendlines another five years — to 2024 — and a scene emerges bleaker yet.

We discover an $11.7 trillion wealth disparity: 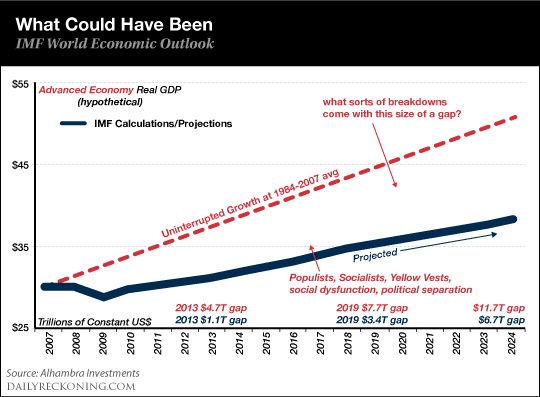 An extra $11.7 trillion of wealth could tackle a great number of ills. Alas… it never was.

Meantime, the world plunges deeper and deeper into debt…

Our agents inform us that total global debt has swollen 50% this decade alone.

If debt is intended to jump-start the engine of growth as the Keynesian instruction manual provides… we must conclude it is horribly off the facts.

And a fellow expecting pre-crisis growth to return is a fellow who waits in vain.

For the most part… people around the world have been remarkably patient. By and large, with few exceptions, populations gave authorities the clear benefit of the doubt, every chance to succeed. After 11, now 12, years, it has become quite apparent to many that’s just not going to happen. And as this economic gap only widens, it will become apparent to many, many more even if they’ve never once paid attention to a single GDP report.

The above chart features an arrow pointing to the flourishing of populists, socialists, French “yellow vests,” social dysfunction and political separation.

Is it coincidence these movements gather pace as the advanced economies wallow?

Remain within these shores for the moment…

First we had the election of Donald John Trump to the presidency of the United States.

He pledged to bring the jobs back and restore the Rust Belt to its former splendor.

If the advanced economies had maintained their pre-2007 growth rates…

We suspect strongly that President Trump would still be terminating aspiring apprentices on reality television… and Bernie Sanders would be an exhibit in a museum, sandwiched between the Studebaker and the dodo bird.

But in the referenced chart Snider also raises a worrying question:

“What sorts of breakdowns come with this size of a [GDP] gap?”

We can only speculate. But we suspect the roads will run to strange places…

“The Right Medicine Is Not Presently on Tap”

The election of colossal rogues to high office, stronger monetary moonshine such as MMT and 100 other quack cures for that ailments that presently ride us.

Regardless, we can safely argue the way ahead will not include:

Here we list a few items — we could continue but the timekeeper points to his watch.

That is, the right medicine is not presently on tap.

In brief, we expect the present situation to worsen before — on some distant tomorrow — things may possibly turn for the better.

But by our lights, the world must first snap to its sober senses.

Unfortunately, experience keeps a dear school as old Ben Franklin said — “and fools will learn in no other.”