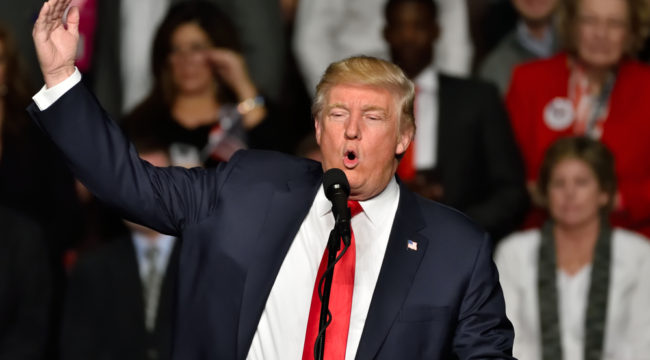 It's All Over Except the Shouting

It’s all over except the shouting, and I’m not talking just about Ryan’s “repeal and replace” washout.

I mean the whole fantasy of the Trump Reflation trade and Wall Street’s delusional view that the massive financial bubble now enveloping the casino can be kept afloat indefinitely because Washington will always come through with whatever “stimulus” it takes.

The idea that there is an actual working GOP majority and that some pro-growth policy juggernaut is coming down the pike has always been a case of the wish being father to the thought.

After all, the present day Republican party is such a fragmented gang of factions that it couldn’t even nominate a presidential candidate. What remains of the party got mugged by a rank amateur and insurrectionist.

He won only because Flyover America is desperate economically; but the Donald offered no coherent program at all.

Among other things, that’s why today’s non-vote came down to the wire at all. The campaign was all noisy demands for “repeal,” but hardly more than a few random tweets about “replace.”

So there is no GOP consensus or public mandate at all about the hard part of replacing Obamacare. Trump himself had no ideas except eliminating interstate barriers to insurance sales, but that assumes there are customers.

There are not. Roughly 275 million people are hostage to Medicare, Medicaid and employer group plans, which alone include about 160 million beneficiaries.

But those are giant pre-payment pools where insurance competition doesn’t matter; coverage structures are rigidly “one size fits all” within each of the big pools; and, perhaps most importantly, what passes for the health care “market” is just a bureaucratic clearing house where provider cartels attempt to maximize their billings — while insurance companies, HMOs, PPOs and utilization review and pre-approval agencies seek to minimize what they certify for payment.

Under those status quo arrangements, there is absolutely no way to get what most of the GOP professes to want, especially the conservatives.

Those good things can only happen when a meaningful share of the above-mentioned 275 million participants are liberated from the inherent collectivism of third-party payment pools and, instead, are given the cash equivalent to shop the hell out of the medical service delivery and insurance coverage system.

Then “competition” would be electrified, thousands of differentiated health plans would bloom and pricing would become individual cost-based.

Then too, the relief from soaring Obamacare premiums that the Freedom Caucus demands could be actually achieved because the dynamics of the underlying system would be fundamentally altered.

That is, there would be capitalism for providers and consumers alike — not the de facto socialism for the latter which is the structural driver of the current disastrous system.

But none of this is even on the table.

This means that whatever adjustments finally emerge from the push and pull within the GOP caucus, the resulting bill will still be inherently Obamacare Lite.

Indeed, what has happened during the last few days of bargaining is that the House bill was moved a few notches rightward. It became Obamacare Ultra-Lite, but it would not actually achieve any of the objectives sought by the Freedom Caucus.

In this context, the very best outcome for Speaker Ryan and the White House would have been that they tortured enough elbows to win Obamacare Ultra-Lite by one or two votes.

But they pulled it altogether because the votes just weren’t there.

The bill wasn’t defeated outright — but let’s just call it a defeat for Trump.

Normally, at this stage of the game, the majority party and Speaker ordinarily would have arrived at a third alternative, which is to pull the bill and rework it until they have a margin of safety on the roll call.

But the great deal-maker in the Oval Office elected to roll the dice, demanding an up-or-down on vote today (Friday) whether the whip count is there or not.

The Donald’s ultimatum surely represented the height of folly.

In any event, even if the the bill passed, it still had to make its way past Senate GOP moderates like Susan Collins (Maine), Rob Portman (Ohio) and Lisa Murkowski (Alaska), to name a few, all have the same complaints as the House moderates.

That means, in turn, that all the 11th hour concessions to the Freedom Caucus would have been stripped out in the Senate in order to obtain 50 votes plus Pence.

Even then, it would have taken weeks of maneuver in the Senate and then a prolonged conference committee resolution process to get a compromise that had any chance whatsoever of passing muster in the House.

The idea that all of this can still happen, if it happens at all, before Memorial Day or even July 4th is a pipe dream — and not only because of the substantive difficulty of parsing what amount to trivial differences.

The implications are straightforward. Whether the bill failed today or somehow passes, the silly idea that there is a monolithic, effective GOP majority will soon be put to rest.

And the notion that the Donald is some kind of brilliant deal-maker will be replaced by the reality that he’s an impetuous, undisciplined, naïve amateur that most of the Imperial City already detests and is looking for every opportunity to take down.

And that gets to an even more important implication of this week’s gong show.

The lack of policy substance and political consensus within the GOP about the “replace” component of Obamacare will be revisited in spades when it comes to the tax cut and fiscal agenda.

In a word, the debt ceiling is now frozen, the built-in structural deficit is running at nearly $1 trillion per year, and there can be no tax reform without FY 2018 budget resolution and reconciliation.

To get the mandatory 10-year budget resolution and layer on top of that the big Trump corporate and individual tax cuts imagined by Wall Street will require 218 House GOP votes (there is no longer a snowball’s chance of that because they have declared war on the Donald) for a minimum of $12 trillion of new deficits and a $30 trillion public debt by 2027.

It won’t happen. Not in a million years.

As I said, it all over except the shouting. It’s also another good opportunity to get out of the casino.

George W. Bush wasn’t right about much, but he was spot on — albeit 9 years early, as it turns out — when he famously said “this sucker is coming down.”