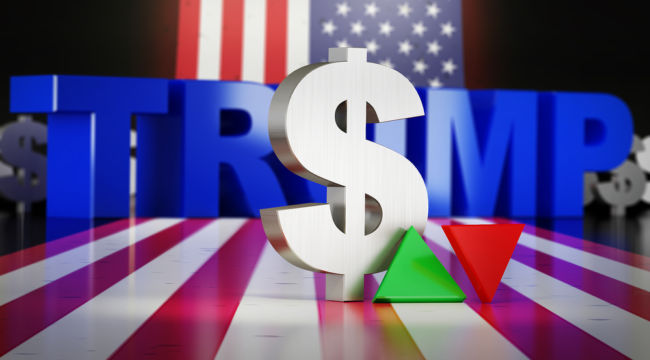 Is Trump Personally Driving the Economy?

President Trump is the source of a vast and wondrous magnetism…

In fact, his personal radiance is pushing the economy along.

That is because the president lives a very ostentatious lifestyle. And the American consumer is spending gorgeously in imitation of him.

This consumer bonanza is keeping the expansion running.

Do we spin a comical yarn, a coy fiction?

This information we have on the authority of a Nobel Prize awardee — Mr. Robert Shiller.

Mr. Shiller professes economics at Yale University. And he believes the president’s luxuriant ways have inspired the American consumer to spend grandly:

Consumers are hanging in there. You might wonder why that would be at this time so late into the cycle. This is the longest expansion ever.

Now, you can say the expansion was partly [President Barack] Obama… But lingering on this long needs an explanation.

I think that [strong spending] has to do with the inspiration for many people provided by our motivational speaker president who models luxurious living.

A certain Scott Wren is a senior global equity strategist at the Wells Fargo Investment Institute. And he sees justice in Shiller’s argument:

We hope these fellows are correct.

Yet we remain ferociously unconvinced…

Consumers Are Drowning in Debt

In our estimate the American consumer strains and groans — grotesquely swaybacked — under preposterous debts.

Is this because Americans have fattened on stock market gains… and are feeling flush?

Since 2009, our minions inform us, scarcely half of Americans owned stocks.

That is, nearly 50% of Americans have been absent from the table.

They already buckle under the load — and the economy is still expanding.

Meantime, the cost of a middle-class lifestyle has surged 30% over the past two decades.

But Pew Research has reported the average American worker has gained no purchasing power in 40 years.

That is, he has jogged in place 40 years.

Thus Morgan Stanley reports heaps of consumers are “under stress.”

And UBS recently conducted a survey of “lower-tier” consumers. This survey informs us:

Over 40% of respondents conceded they recently endured a “credit problem.”

That is, they missed a credit card payment, defaulted on a balance due or were denied a new credit card.

All the while, automobile loan delinquencies have increased since last year… as have the percentage of student loans 90 days or more in arrears.

Put the facts and figures together, combine them, pile them one atop the next.

Is this the pillar of strength holding up the United States economy?

Next answer this question:

What if it gives out?

Consider, if you will, the United States corporation. It is similarly belabored.

Corporations are packed to suffocation with debt — cheap debt coming by way of the Federal Reserve.

Corporate leverage has increased some 50% this past decade — on average.

And today’s nonfinancial corporate debt-to-GDP ratio is its highest since 1947 — when records began.

A goodly portion of this debt has gone flowing into stock buybacks.

These buybacks have lifted stock prices to splendid, even precarious, heights.

But here we spot a straw swaying menacingly in the wind. Over the past three months…

The number of loans downgraded by S&P Global Ratings has exceeded upgrades by the largest amount in 10 years.

And the number of “weak links” — corporate debt issuers rated B-minus or worse — are the highest since November 2009.

“Cracks are emerging in the loan market that could soon become big holes.”

“Whatever the cause [of the next recession] may be, the acute point of pain will be in corporate credit.”

Last week the IMF downgraded its 2019 global growth forecast… to the lowest level since the financial crisis.

The IMF and other economic policymakers have expressed concern over high levels of risky corporate debt in the past. But the group said Wednesday that attempts by central banks worldwide to lower interest rates to combat immediate economic risks have exacerbated the situation, leading to “worrisome” levels of debt with poor credit quality and increasing financial vulnerabilities over the medium term.

Forty percent of all major economy corporate debt could be “at risk” in another global downturn, warns the IMF.

But the world’s central banks have largely depleted their anti-downturn ammunition.

Negative interest rates already exist in certain areas. They have worked little improvement where tried. There is no reason to believe deeper forays into negative territory are the way out.

Thus the handwriting forms upon the wall. Come the next downturn…

Out will go the central banks. In will come the politicians, checkbook in hand.

Modern Monetary Theory (MMT), helicopter money —  call it a rose if you wish —  will be the medicine on tap.

It is quack medicine. But it will come out in heaping doses.

It will not cure the patient. But it will likely give him an inflationary fever…