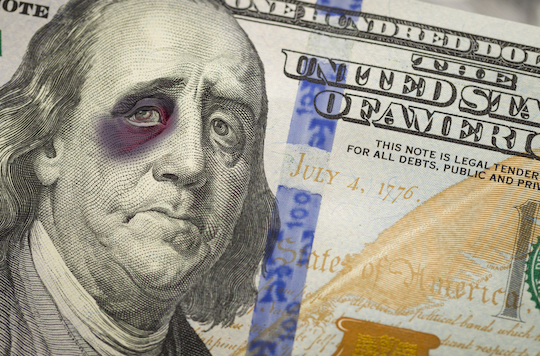 Today we don the prophet’s motley, climb atop our soapbox… and holler a thumping prediction.

But what established trend? How will it end? And why so all-fired important?

Answers anon. But first an after-action report on today’s combats…

The bears won — if barely.

The Dow Jones lost 135 points today. The S&P was essentially even on the day. The Nasdaq, meantime, turned in a 16-point gain.

Mixed earnings reports — some swell, some not — largely cancelled each other.

On that date BusinessWeek announced before the world “The Death of Equities.”

For nearly 15 years the stock market had been sunk in the crushing deeps of a bear market. Why should it end?

Dazzled and blinkered by the present’s brilliant focus, the wise men of BusinessWeek had forgotten about the past.

This time is different, they believed.

They forgot that markets move in clockwork cycles, that the wheel swings around eventually, that the full circle runs to 360 degrees.

The gods pointed, laughed… and plotted.

By 1982 the loveliest bull market in all of history was underweigh. It roared and raged for nearly 20 years following.

Come we now to this headline in another BusinessWeek — Bloomberg Businessweek — dated April 17, 2019: 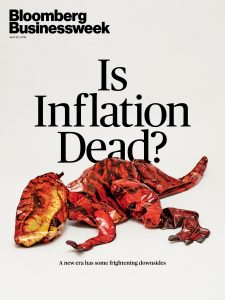 “It Is Always Different — Until It Is Once Again the Same”

As in 1979, today’s professional men believe this time is different.

They tell us globalization, a “savings glut” or productivity increases through technology have licked inflation for good.

Despite the heroic sweating of the printing press and all the angels and saints, they remind us, the Federal Reserve cannot work a sustained 2% inflation rate.

Why should it change now?

But it is always different — until it is once again the same.

Here at The Daily Reckoning we take the overall view, the long view — the view sub specie aeternitatis.

And in the grand sweep, the cycle completes.

We have our perfect contrarian indicator.

We must conclude that inflation lurks in the offstage wings, awaiting word from the gods.

But if the Federal Reserve has proven unable to whip disinflation with its deep bag of tricks, how will inflation make its entrance?

We have suggested it previously, if only from a glancing angle:

Come the next downturn, the Federal Reserve will blast us with the same quantitative easing and zero interest rates it inflicted upon us last time.

It may also have a go at negative interest rates.

But much of its “dry powder” the Federal Reserve used against the last crisis. Its stocks remain heavily depleted, despite efforts to reload.

Like last time, its false fireworks may scintillate the stock market — in the near run at least.

Also like last time, they will work limited effect upon the economy of people, places and things.

That is, upon the real economy.

And negative interest rates have failed to meet their advertising where tried, Japan and Europe being cases brilliantly in point.

There is little reason to expect they will succeed in these United States.

No, the central banks are tied hand and foot.

The “Perfect Theory for Our Times”

MMT will parade as quantitative easing for Main Street.

Through the miracle of the printing press a healthy inflation will finally emerge from its cage.

If it strays too far or begins to snarl, the tax man will go chasing after it.

Higher taxes will simply vacuum surplus money from the economy and jam inflation back in its cell.

One reason this may be attractive is that it is increasingly clear that monetary policy is exhausted, at least in the developed economies…

It seems to me that MMT is the perfect theory for the times. It appears to justify a switch from monetary to fiscal policy as the key tool of macro management… it can also be used to fund popular policies… Put simply, this would see fiscal policy play the role that monetary policy has played for decades… The key point now is that MMT is being used as an argument to justify important policy changes…

An End to “Secular Stagnation” and the “Savings Glut”

And through public spending MMT promises to murder the “secular stagnation” and “savings glut” that presently ride and torture the economic establishment.

If this policy approach were implemented it would be fatal to secular stagnation… For 30 years the main policy response to this [problem] has been to reduce interest rates… The point is that it has required lower and lower rates to achieve any given growth rate. Increased public dis-saving is the direct antidote to the private sector’s rising saving… if there is a broad-based adoption of MMT in the next downturn, it will end the secular stagnation era.

We are skeptical — deeply — that a “savings glut” has any existence whatsoever.

As well argue that a “wealth glut” exists. Moreover, that it takes the form of a public menace.

But our larger point, sharp as pins, is that MMT is beginning to get a hearing.

To date a mere handful of Democratic officials and presidential aspirants have bellowed for MMT.

But come the next downturn and the Federal Reserve’s botched rescue, the chorus will swell — depend on it.

Just so, you say.

But the Republicans will never let it through. They may be a gang of scoundrels in their own right. But even they will go only so far.

But Republicans too sense changes in the wind. They too can jab a moist index finger in the air to determine which way it blows.

Might they hatch a “conservative” MMT to position themselves upwind of public opinion?

But does a conservative MMT even exist?

He is also the author of “Modern Monetary Theory for Conservatives.”

But instead of funding lavish and exotic government spending, a conservative MMT would finance tax cuts.

But have they not tried tax cuts already to little general effect?

Yes, but an MMT-backed tax cut would hacksaw taxes to the extent a progressive MMT would heave forth money.

The gargantuan tax savings would then go flooding onto Main Street.

In the first case, the private sector is expected to do the spending, in the second, the government…

The same principles could be used to justify a very different agenda than is commonly associated with MMT. The core idea that central bank-financed deficits drive activity and inflation remains the same.

This Englander says he does not advocate any such plan — merely that it is possible.

But might some enterprising politicos haul it out as a more “sensible” alternative to a lunatic progressive MMT?

Well, maybe it would. But recall, deficits do not matter.

This we have on authority of a former Republican vice president.

Besides, you cannot beat something with nothing, he might say.

Progressive MMT, conservative MMT, the end is the same.

And either could be one good crisis away…