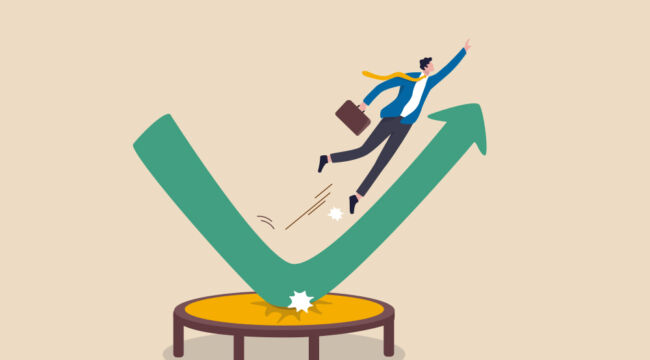 Your choices are these:

A): The stock market will thunder back with fantastic vigor…

B): The stock market terrors will extend throughout the year…

C): This year’s grim first half will exert no gravity whatsoever on the second — the stock market is as likely to rise as it is likely to fall.

History holds the answer. Which is it? The all-important answer soon.

But first to the present…

The stock market bounced along in positive numbers much of the day. Yet it lost its courage — and its oomph — by late afternoon.

The Fed will continue to raise interest rates until inflation begins to wane. Until then, a sustainable rally for risk assets is hard to imagine… Tight monetary conditions will continue to be a headwind to financial markets until the Fed gives the green light.

Yet what was the source of today’s initial optimism?

There he babbled these words:

We are not trying to provoke, and I don’t think we will need to provoke, a recession… We anticipate that ongoing rate increases will be appropriate; the pace of those changes will continue to depend on the incoming data and the evolving outlook for the economy.

And so the stock market made a meal of this morsel. As explains Mr. Karim Basta, chief economist with III Capital Management:

“[Powell’s testimony] seems significant and may herald a slower pace of rate hikes ahead.”

Thus we may have witnessed the return of our old friend today — “Bad news is good news.”

Many fear the United States economy skids toward recession, inexorably and inevitably (more on which below).

And so we return to today’s question: What does the stock market’s ghastly first half imply for the year’s second half?

Once again, your choices are:

A): The stock market will thunder back with fantastic vigor…

B): The stock market terrors will extend throughout the year…

C): This year’s grim first half will exert no gravity whatsoever on the second — the stock market is as likely to rise as it is likely to fall.

Perhaps you require additional information to inform your decision. We refer you then to Zero Hedge:

The S&P 500 is currently on track for its worst H1 performance since 1932 at the depths of the Great Depression, having shed 22.3% so far this year in total return terms. That just edges out 1962, when the index lost 22.2% over the first six months of the year.

Here is your answer. The answer is A — The stock market will thunder back with fantastic vigor.

That is correct. History indicates the stock market will undergo a sort of trampolining in the year’s second half. Zero Hedge:

Readers looking for some positives may be comforted to learn that the five worst H1 performances for the S&P 500 before this year all saw very good H2 performance.

Indeed, on four of those five occasions, the index went on to gain at least 17%, with the other seeing a 10% gain. In order of H1 declines, we saw:

This year’s first-half 22.3% plunging most approximates 1962’s 22.2% plunging. Can you then expect an approximate 17% rebounding in the second half?

Perhaps you can. Yet there is a joker card in this deck, a confounding and worrying variable.

The joker card is… recession.

A second-half recession likely reduces the rebound hypothesis to nothing. Recession would tug too forcibly upon the stock market. Once again, Zero Hedge:

Still, what happens in H2 is quite binary: If we don’t see a recession materialize over that period… it might be tough for markets to continue to be as bearish as they have been, and a bounceback resembling history might be possible. However, it’s hard to see markets recovering if we see firm evidence of the recession (our emphasis).

Hence this question: Does firm evidence for recession presently exist?

This morning our economic Sherlock Holmes argued no — no evidence exists. Mr. Powell:

I don’t see the likelihood of a recession as particularly elevated right now… [the economy] is very strong and well-positioned.

Thus our skin goose-pimples and our blood freezes. The fellow has a record of inaccuracy second to none — or second to few at most.

He is not, after all, the first chairman of the Federal Reserve.

Recession is defined officially as two consecutive quarters of minus growth. First-quarter growth came in at minus 1.5%.

Zero is but one rounding error removed from the minus numbers. Should second-quarter GDP turn in a beneath-zero reading… the economy will officially pass into recession.

Yet what if the economy already languishes in recession?

Weisenheimers with the firm Piper Sandler inform us that bear markets generally follow a recession’s onset by an average three months — 95 days for precision’s sake.

That is, recession generally emerges some three months before the bear market emerges.

The S&P 500 crossed over earlier this month. We therefore conclude that recession commenced in early March — if the historical pattern holds true.

The recessionary bear market generally hemorrhages some 40% of its value before getting patched. The S&P 500 has shed 22% to date, approximately.

History may not necessarily repeat. But as the great scalawag Mark Twain observed, it rhymes.

The Mills of the Gods

Given the vast excesses of the past several years, we would not be the least surprised if the purging is greater… and persists longer.

We do not pretend to know of course.

The ultimate answer rests in the laps of the gods — the inscrutable gods.

Yet we are fond to cite the warning of ancient philosopher Sextus Empiricus, which we do once again today:

“The mills of the gods grind slowly, yet they grind exceedingly fine.”