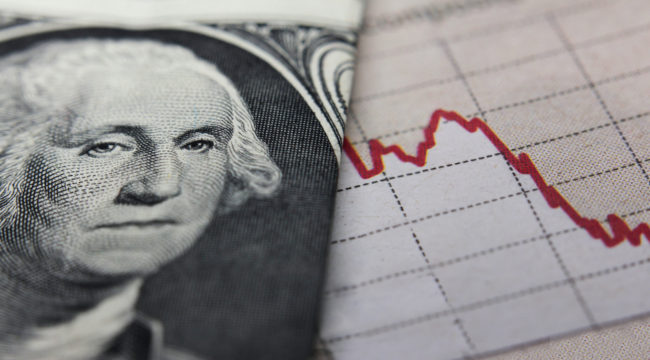 Into the "Tractor Beam" of Zero Rates

“We’re probably never going to go away from zero rates.”

Mr. Bass believes the economy will plunge into recession next year. And the Federal Reserve will hound interest rates back down to zero.

There they will remain forever and ever… world without end.

The economy will fall within the inescapable “tractor beam” of zero rates:

As we have all learned, once an economy falls into the tractor beam of zero rates, it’s almost impossible to escape them… Growth numbers are going to come down and real growth might go to zero. We’re probably never going to go away from zero rates.

We fear Bass is correct.

Like a man hooked to a respirator, the economy cannot breathe on its own.

The financial crisis collapsed its lungs.

The Federal Reserve rushed over, plugged in the oxygen… and never took it out.

The economy’s natural breathing apparatus has atrophied from disuse.

Yank the oxygen now… and you will have a situation on your hands.

Dr. Powell attempted to wean the patient off support. But it gurgled, sputtered and flailed.

He will not try again. He is in fact preparing to pump in more oxygen.

But the economy might breathe freely today… if they had only let it recapture its own wind post-crisis.

But it would have coughed out the excesses of the previous boom… and gradually filled its lungs with the invigorating air of honest capitalism.

It would have come around on its own.

In went the breathing tube instead…

United States debt — public and private — has moonshot some $21 trillion this past decade.

It presently totals an impossible $73 trillion.

The economy pants and sweats mightily under the burden.

And rising interest rates would increase the cost of that debt.

Any meaningful interest rate increase would pile on too much weight… and the economy would buckle under the strain.

Compare today’s debt-to-GDP with 1970’s — when the Federal Reserve was still jailed in by the gold standard: 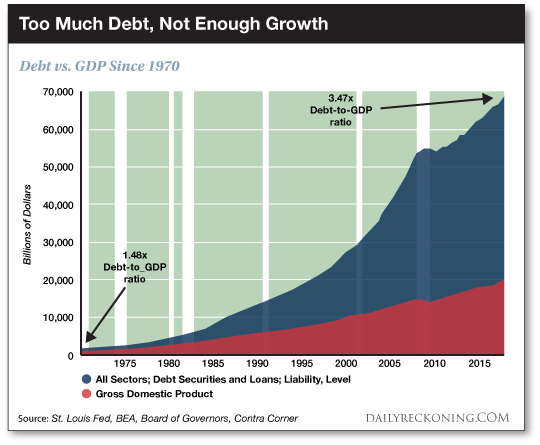 The Federal Reserve is trapped.

But here is the problem:

The Federal Reserve cannot raise interest rates, as we have attempted to establish.

But like trying to breathe life into a corpse… or Hillary Clinton… lowering rates will not work the trick.

[We are at] a condition best described as Peak Debt, which reflects the fact that a large share of domestic household and business balance sheets are tapped out.

Accordingly, cutting interest rates has increasingly less potency on Main Street due to the crushing absolute level of debt. As of Q1 2019, in fact, total public and private debt weighed in at $73 trillion and is up by $21 trillion from the pre-crisis peak in Q4 2007…

There are now two turns of extra debt on the national income (3.47x versus 1.48x) compared to the long-standing leverage ratio which prevailed during the century between 1870 and 1970. In quantitative terms, those extra turns amount to $40 trillion of extra debt being lugged around by the U.S. economy.

Needless to say, it is becoming ever harder for the Fed to stimulate more borrowing and spending relative to the nation’s $21 trillion of nominal income. It’s simply a matter of diminishing returns to small reductions in what are already rock bottom rates — coupled with the exhaustion of balance sheet capacity.

And so the Federal Reserve wields far less wallop than commonly supposed.

The Federal Reserve is a helpless giant, a man behind a curtain, a tissue-paper tiger.

That is why we expect it to flunk the inevitable recession.

And also why we expect a fiscal rescue attempt next time — not monetary.

Read on to see why central banks do not much matter these days. As you will see, there is no actual money in monetary policy.

But if central banks are largely irrelevant, then who… or what… is pulling the monetary strings?