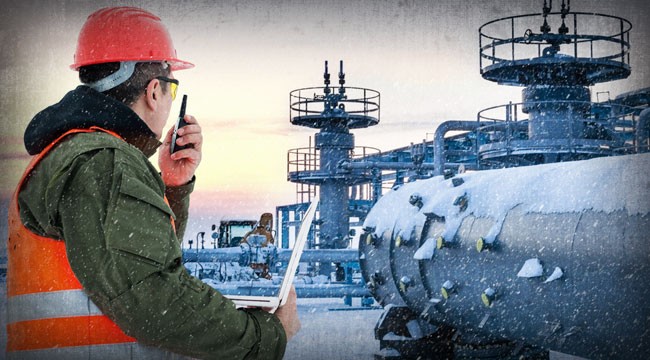 The Most Bullish Chart for 2015 Oil Prices

Last week, I came across by far the most bullish chart for 2015 oil prices that I have seen since the bottom fell out of the market. Interestingly, the chart came from one of the more credible voices in the business, Steven Kopits of Princeton Energy Advisors.

What makes me think that Kopits is credible? The track record of oil traders who use him for advice, the most notable being Andrew Hall.

Have you heard of Hall?

If you are close follower of the oil markets, you likely have.

Among oil traders, he is referred to as “God.” They don’t call him that because he is just “OK” at what he does.

Let me tell you a little bit about him.

Among oil traders, [Hall] is referred to as “God.”

His most highly publicized accomplishment was predicting both the oil spike of 2008 and the subsequent crash. He personally made $100 million in each of 2007, 2008 and 2009 because of those calls. He had to take his 2009 profits in the form of an increased ownership stake in the firm he runs because President Obama wouldn’t allow his employer, Citigroup (which had accepted a huge taxpayer bailout), to cut him a check.

Those three years of success were no fluke; they were a continuation of a long run of outstanding performance.

From 1997-2009, when Phibro (the trading unit that Hall ran) was sold by Citigroup to Occidental Petroleum, the business unit generated $4.4 billion in profits. Perhaps even more impressive, Phibro was profitable in 80% of the quarterly periods over that time. That shows incredible consistency and the ability to call changes in the oil market in both directions.

Since 2009 Hall has been managing Astenbeck Capital, which is 20% owned by Occidental and 80% owned by Hall himself. Recently, he has again been able to successfully navigate big turns in the oil market as he sold off his long oil bets in September of this year and instead went long the U.S. dollar (which has been skyrocketing), allowing him to post a profit while oil has been cut in half.

As I mentioned, Hall uses Steven Kopits as an adviser.

Being an adviser to “God” doesn’t necessarily mean that Kopits is infallible, but I do believe that it makes listening to his opinion worthwhile. 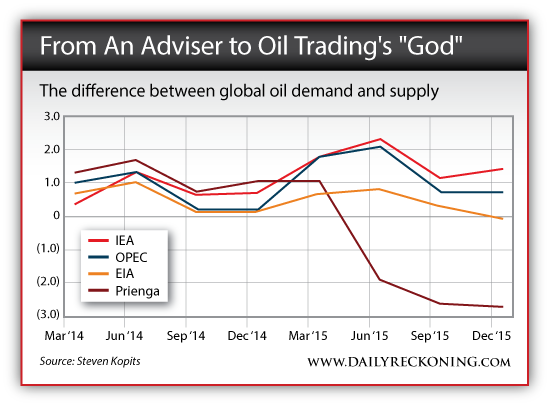 Looking backward, all four lines show an oversupplied oil market dating back to March 2014. Looking forward, the IEA, OPEC and the EIA all believe that oversupply will continue through the end of 2015 to various degrees.

As you can clearly tell from the graph, Prienga has a very different view.

The forward-looking numbers from Kopits show the market moving dramatically into a supply shortage of over 2 million barrels per day by June 2015 and getting larger as the year goes on. To say this view is different from the consensus view would be an understatement, and not a mild one. If accurate, the data above suggest that oil prices are going to come roaring back in the second half of 2015.

I was able to get in touch with Kopits via his website/blog to try and get some additional color on the assumptions that went into his graph. Here’s what he told me…

The first thing that he pointed to is the big demand response that we have already seen in the United States to lower oil prices, and the fact that the IEA, EIA and OPEC have some very pessimistic 2015 demand assumptions.

In December, Kopits notes, that U.S. oil consumption rose 4.4% year on year. That equates to an increase of 800,000 barrels per day.

To put that in perspective, consider that the December increase in the United States alone is equal to the IEA’s full-year 2015 forecast for global oil demand. If U.S. demand were to stay at December levels, IEA’s demand forecast would be almost a million barrels too low.

For his graph, Kopits modeled the OECD demand growth that was experienced in 1986 subsequent to the 1985 oil price collapse.

On the supply side, Kopits reminded me that the only source of oil production growth last year was North America, and that all of the three main observatory bodies were still predicting significant growth again in 2015. Kopits is highly skeptical of that and believes that it is far more likely we see U.S. oil production declining by the second half of 2015.

My take on all of this is a couple things.

First, Andrew Hall is exponentially smarter than I am about the oil markets (and everything else, I suspect), and he thinks enough of Steven Kopits to turn to him for advice. While Kopits’ observations may seem a bit extreme, they are worth listening to.

The plummeting number of rigs drilling in North America will have a direct impact on supply, and to think there will be no demand response to a 50% decline in oil prices is silly.

Are the projections put forth by Kopits going to be proven accurate? I don’t know about that, but I bet they are a lot closer to the eventual truth than most people would expect.

This shale production boom was built on an ever-increasing availability of cheap credit and an ever-increasing number of rigs drilling. Both of those are now are being reversed in short order, and the steep early-year decline rates that characterize shale oil production will reveal themselves as the brakes are applied to the rate of drilling.

The oil price is going to rise. It has to. At current prices, there are very few oil plays where a profitable well can be drilled today. If oil wells aren’t being drilled, global oil production is going to decline. And remember, global oil demand is still growing as well.

The short-term could be tough for investors with exposure to energy stocks, but six-12 months from now, things are going to look a whole lot brighter.