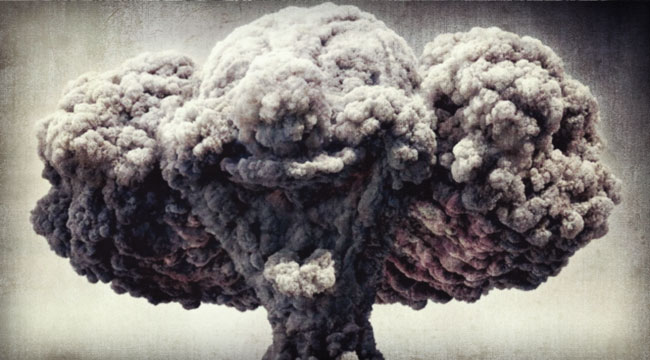 In the Downdraft of Hormegeddon

All mass phenomena function in a similar way to the behavior of disease. Passing from one person to another in large groups, infectious bacteria multiply and mutate. Those killed by antibiotics and natural antibodies die off. Those not killed continue adapting and evolving.

Without frequent contact with the enemy, the target grows soft and vulnerable. Over time, the more successful people become at protecting themselves — by avoiding the invasions of deadly bacteria — the more susceptible they become to the next mutant invader.

As defenses weaken, the risk/reward ratio — for the potential invader — improves. The more successful he has been at resisting invasion, the more irresistible the target becomes.

This insight puts us in an extremely cynical and pessimistic frame of mind. Progress of any kind in collective human life seems impossible. The more civilized people become, the more they are tempted to barbarism. Imagine, for example, a community so civilized that there are no locks on the liquor cabinets and merchants leave their goods, unguarded on the sidewalks, while policemen take their mid- afternoon naps. Who could resist the urge to larceny?

It is true that cooperation builds trust, and high levels of trust bring benefits to a society, lowering transaction costs while encouraging specialization and trade. But this only increases the rewards to the non-cooperating rule-breaker. As the risk/reward ratio goes higher cheating becomes more attractive.

Imagine a town in the Dark Ages, surrounded by strong stone walls. Such a town could become wealthy by trade and commerce — cooperative activities that yield a profit, which could be accumulated. The stone walls, manned by skilled soldiers, would hold off enemies.

The better the defenses, the longer the town’s merchants and producers could carry on their trades without being molested. And the more wealth they could accumulate. But this growth would cause the potential attacker to redo his math. The cost of attack — weapons, mercenary soldiers, outfitting, supplying, and so forth — might stay the same. But the reward would increase, promising a better return on investment.

At the same time, the town, having not been attacked in decades, would become complacent. It might ignore its defenses and neglect to pay its own soldiers. ‘Why bear the cost of protection when it is clearly unnecessary,’ the city fathers would ask of one another? This, of course, would lower the cost of a hostile takeover…and further tempt the potential parasitic invader.

In the modern, developed world, we see this temptation to parasitism in much less threatening forms — free medical care for seniors, disability payments to obese people, government agencies pretending to ‘do good’ and so forth. We see it in less benign forms also — drones, spying, loss of habeas corpus, foreign wars, etc.

We see the cycle of civilization in the bond market too. The rising trust and cooperation of advancing civilization produces net positive returns…and falling interest yields. This is not just speculation.

According to Sidney Homer and Richard’s Sylla’s “History of Interest Rates,” in the 14th and 15th century interest rates averaged from 10% to 25% in the Spanish Netherlands and from 15% to 20% in France. As civilization advanced, interest rates fell — in the United States in the 20th century, to an average of about 3% to 4%.

But this grand progress, lowering interest yields over centuries, was not a straight-line affair. It was cyclical. Each time rates fell “too low,” too much money was lent to too many marginal borrowers.

The civilized rule is simple: when you borrow money you must repay it. But households over-extended themselves. Lenders overlooked the weakness in their borrowers’ balance sheets. Borrowers tended to overstate their financial solidity. Entrepreneurs overreached. Merchants oversold. Defaults increased. And the real rate of return declined as trust gave way to fear (of losing money).

High cooperation = high temptation. At the margin, where all the important things in life take place, lax lending standards lead borrowers to take out loans they can’t pay back. The desire to gain privileges, status, and income streams overwhelms the respect for the cooperative protocols that brought the positive returns in the first place.

New ‘values’ appear that seem to justify departure from the original rules. Self-reliance, forbearance, and independence, for example, are replaced by fairness, security, and universal health care. However, you will notice a clear distinction between the old values and the new ones.

They reflect a change in attitude, from risk taking to risk avoidance, from wealth building to wealth preservation, and from laissez-faire to centralized control. They may also be expressed as different kinds of rights. The former are rights to do something for yourself. The latter are rights to force someone else to do something for you. The former require cooperation. The latter need only fear and then violence.

Their success begets failure, trust begets aggressive parasitism, and we see a return to violence. Under the strain of policing and enforcing the new rights, the return on investment falls. Then, the zombie elite becomes ruthless in its efforts to protect its gains.

Government is the key player in this process. As we have seen, government is always and everywhere a reactionary institution, favoring the interests of the (voting, contributing, backstabbing) past and present over the (unborn, unknown, helpless and harmless) future. But in the downdraft of hormegeddon, government becomes a real monster.

Ed note: today’s email edition, you could’ve read all about our sit-down with Bill… not to mention reactions good and bad to a provocative article Jim Rickards wrote exclusively for us. It’s all part of the larger discussion going on in the FREE Daily Reckoning email edition. If you haven’t signed up yet, you’re missing out. It’s free and easy to do, you simply need to click here now.