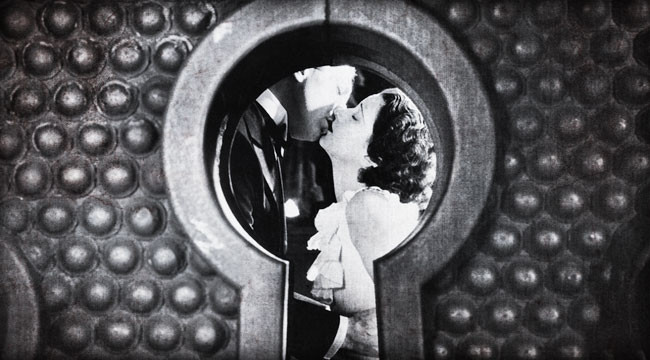 The Timeless Wisdom of Izzy Stone

“I sought in political reporting what Galsworthy in another context had called ‘the significant trifle’ — the bit of dialogue, the overlooked fact, the buried observation which illuminated the realities of the situation.” — I.F. Stone, The Haunted Fifties (1963)

I start with a hidden problem in the stock market’s latest earnings report card. Overall, earnings rose about 2% for the quarter. But if you take out the financials (banks, insurers), earnings actually fell by 3%.

I appeared on Fox TV Friday morning. Before the show, I said I wanted to talk about this earnings stuff. The producer asked, “Do you think that’s too technical to explain?”

“I should hope not” I thought to myself. I hope people understand that earnings (or profits) drive the stock market over the long term.

Take a look at this chart from FactSet, which shows just that. 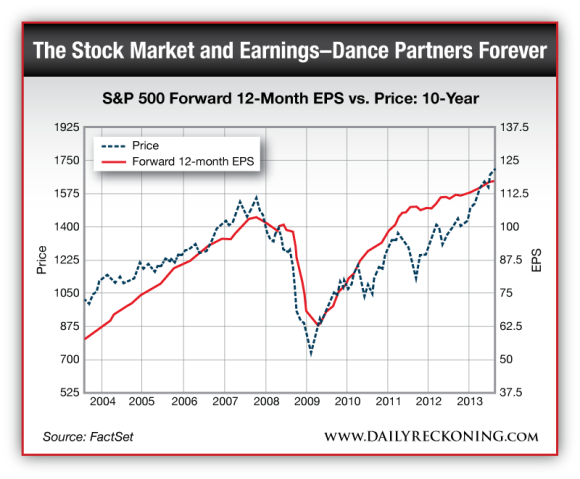 So if earnings fall — or if people start to think earnings will fall — the stock market also tends to fall. This is simple stuff. Trying to predict what will happen is, of course, anything but simple. I’d say it’s foolish to even try. But people love this kind of thing — especially TV people.

I was on Fox last week, on Aug. 7. I expressed the usual caution about the market, which I’ve been doing in these pages all year. Asked if it was time to sell, I said “Absolutely.” I told viewers that my C&C portfolio was down to just nine names. We have historically carried 20-25.

Anecdotally, I said, that tells you what I think of the market. It was a lucky call, because the market has done nothing but drift lower since. (It got me a return invite. They want to know what I think now.)

People are starting to worry about earnings. They are also worried about when the Fed will stop pouring free drinks and end the party — which, in a roundabout way, still comes down to a worry over earnings.

The earnings for the second quarter seem to foreshadow a decline ahead.

I’ve already pointed out the fact that if you exclude the banks, earnings actually fell. In some sectors, the decline was ferocious. The mining sector’s profits were off 59%. (Fortunately, we put ourselves in a great position here. We long ago dumped all of our miners and commodity plays. Instead, we bought the financials. Today, we enjoy the profits — and savings — of that decision.) The overall growth in earnings was the third-slowest growth rate in the past four years (or 16 quarters).

Also, the number of positive surprises was the lowest since 2008. And of the number of companies that gave guidance for the third quarter, about 80% have issued negative guidance. Meaning they’ve taken their forecasts down a notch or two. As a result, the expected earnings growth rate for the third quarter is 4.3%, down from 6.7% at the start of the quarter. That figure is still probably optimistic.

In summary, for anyone who takes a deeper look into the market’s working engine (those earnings), there are plenty of worn-out parts that look like trouble down the road.

Taking a deeper look is what Izzy Stone was all about.

His focus was political reporting. He was famous for digging through the public record and finding things that people missed. As he described it so eloquently, “I sought in political reporting what Galsworthy in another context had called ‘the significant trifle’– the bit of dialogue, the overlooked fact, the buried observation which illuminated the realities of the situation.”

His work has earned him a place among the best investigative reporters that ever lived. I find him inspirational in my own efforts in trying to put together a newsletter attuned to those same “significant trifles.” Stone would’ve made a heck of a financial newsletter writer.

Among my favorite nuggets of wise advice from Stone:

“If you’re going to be a newspaperman, you are either going to be honest or consistent. If you are really doing your job as an observer… it’s more important to say what you see than worry about inconsistency. If you are worried about that, you stop looking. And if you stop looking, you are not really a reporter anymore. I have no inhibitions about changing my mind.”

I don’t think I have to point out how this applies to markets. Certainly, if you come at the market with a strong view, you are apt to overlook the possibly important trifle that doesn’t fit your worldview. And that trifle might be the clue that gets you ahead of the crowd.

“The search for meaning is very satisfying, it’s very pleasant, but it can be very far from the truth. You have to have the courage to call attention to what doesn’t fit. Even though readers are going to say, ‘Well, two weeks ago you said this.’ So you did. And maybe you were wrong then, or partly wrong, but anyway, you’ve just seen something that doesn’t fit, and it’s your job to report it. Otherwise, you’re just the prisoner of your own preconceptions.” [Bold added.]

This is not just for newsletter writers. This is for thinking people everywhere.

We should realize that we are all, to some extent, prisoners of our preconceptions. And we should all work to not let those preconceptions blind us to opportunities (or pitfalls) staring us in the face. Aim to take opportunity (and see trouble) where it lies, and don’t try to force the market to live up to your preconceptions.

Izzy’s world had its center in Washington. Our focus is Wall Street. Both places have many affinities. Power and money are their chief currencies. Deception and sleight of hand are common skills. It’s easy to get discouraged when you get close. Izzy never did.

“I felt that if one were able enough and had sufficient vision,” he once wrote, “one could distill meaning, truth and even beauty from the swiftly flowing debris of the week’s news.” Stone’s essays did that with wit and good writing.

If you are interested, I recommend The Best of I.F. Stone as a starter. If you want more, you can move on to Stone’s six-volume A Nonconformist History of Our Times, which starts in 1939 and runs until 1970. I’ve also read two excellent biographies: All Governments Lie! by Myra MacPherson, and American Radical, by D.D. Guttenplan.

I live in a suburb of Washington, D.C. (If you step outside and listen closely, you can hear the beating heart of the Empire.) Last night, I headed down to the Penn Quarter to meet a couple of friends for dinner. Izzy used to write his Weekly from Washington and lived only a couple of miles from where I was.

It’s unseasonably cool in Washington. We ate out on the patio at chef Jose Andres’ Jaleo restaurant. (Best tapas restaurant in town.) My friends were globe-trotting investors, and I was hoping to get a useful lead or two. And I did. Never stop looking, Izzy used to say. More another time…

Ed. Note: This essay was prominently featured in The Daily Reckoning email edition — a free e-letter that seeks to provide a unique view of global economics and investment news. It currently goes out to over 300,000 subscribers each day around 4 p.m. And that number is growing. Find out for yourself what everyone’s talking about. Sign up for free, right here.