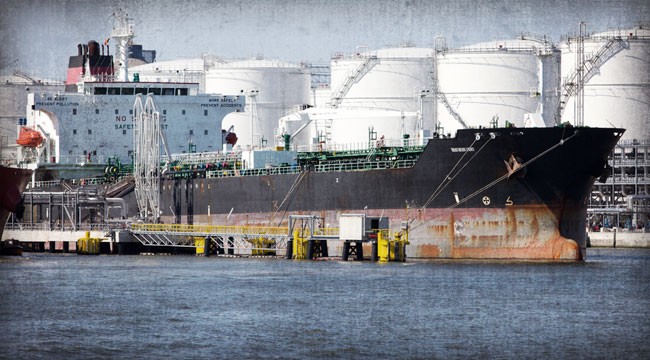 "Imported Oil is Not Your Enemy. It Is Your Friend"

What I’m referring to is the constant guessing that I have to do as an energy investor about how political dickering is going to impact the industry.

First, we had the offshore drilling moratorium that kept many companies in limbo for the better part of a year – that’s Act I.

Then we had bans on fracking in various places — Act II.

Third, is the endless deferral on the Keystone XL Pipeline, which still has not been resolved.

And now, Act IV, we have the issue of needing politicians to repeal an outdated ban on exporting oil from the United States.

On Monday, Byron touched on how allowing exports of oil could actually lower the price of gasoline for consumers.  It is a weird situation that the country finds itself in. Still very dependent on imports of foreign oil (7 million barrels per day) but having more production of a specific type of oil (light oil) than the American refinery complex can process.

I think it is a question with a no-brainer answer, but someone much smarter than I might disagree. Since I’m well aware of the dangers of confirmation bias, I thought I’d share that differing opinion.

According to Warren Buffett’s partner Charlie Munger, the correct answer to the question of exporting oil is likely a resounding no. I think Munger would say this because of what he believes would be in the best long-term interests of the United States.

That isn’t an answer that investors who own North American oil producers (like me) are interested in hearing. These companies are receiving a discounted price for the oil that they produce because we can’t export, and it is costing them billions of dollars.

But here is the deal. Munger is one of the most rational people on the face of the Earth. He is also one of the smartest.

I find one particular opinion of his very interesting.

In 2013, Munger appeared at a roundtable discussion on U.S.-China relations. Watch the video below:

Why would Charlie say this? Surely, relying on regions of the world that do not like America can’t be good for energy security.

Munger’s opinion is based on the fact that he believes (and I’ll use his words directly) “that oil and gas are absolutely certain to become incredibly short in supply and very high-priced.”

Munger wants America to save its oil for the future, when obtaining a supply will be even more challenging.

He believes that the best thing America could do now is produce as little of its own reserves as possible and import everything it can. He believes this would be in the best long-term interests of the country and put it in a better position down the road when oil and gas become scarce.

According to Munger, every barrel of oil that is imported saves a precious barrel of American resources that could be used later. I believe that would be a case of short-term pain for long-term gain.

Although I haven’t heard him say it, I think it would be safe to say that Charlie would argue against exporting America’s oil. However, I also suspect he would give a big thumbs-up to approving the Keystone XL Pipeline, which would bring massive amounts of Canadian crude to Houston refiners and export terminals.

Munger’s view on what to do with American oil is that of a man who is a billionaire and never had any trouble generating wealth for his family. He was genetically gifted to create wealth. I find his opinion on where the price of oil is headed noteworthy, but the reality is that economics will dictate how fast America’s oil is produced.

Personally, I think saying yes to allowing exports of oil from the United States is a no-brainer decision. Of course, I thought the same thing about the Keystone XL, but that is a discussion that a Canadian like me should perhaps not be entering.

Even if oil exports are allowed, it seems quite likely that the politicians will take their sweet time in getting it approved. Until they do that, there is a really good chance that American oil prices are going to sell at a discount to global prices.

There is no group of companies that benefit more from that than the refiners. These companies have input costs based on low American oil prices and sell refined products based on high global prices.

Back in February, I suggested taking a look at the refiners that have the most exposure to these widening differentials (WTI/Brent and LLS/Brent).  For anyone who thinks that political thumb sucking will slow down the repeal of the oil export ban, I think you’re on the right track.

I’d recommend first taking a look at Marathon Petroleum (MPC), Phillips 66 (PSX) and Valero Energy (VLO). These companies have the most exposure to Gulf Coast and Cushing input pricing.

Owning these refiners could also act as a nice hedge for a portfolio of North American oil producers, which are likely to trade inversely to the refinery sector.