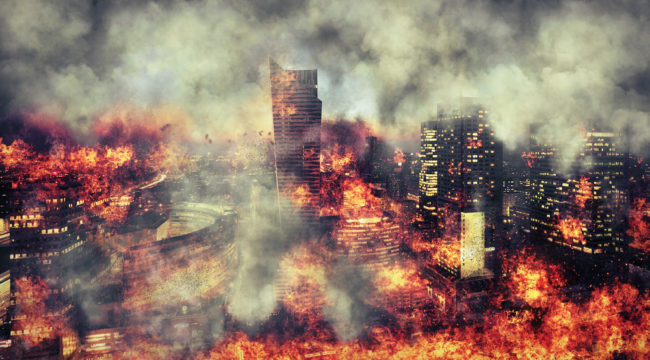 The Impending Fall of American Civilization

Two months ago, a divided Congress was under bonds to pass a 2018 budget before the Oct. 1 deadline.

Without a budget, the government would have to shutter its doors — partially, at least.

It was a near thing.

And failed to pass a budget.

These stalwarts chose to boot the soda can down the street.

They passed a “continuing resolution” instead.

This device keeps the government in funds until Dec. 8 — this Friday.

If Congress doesn’t pass a 2018 budget by midnight Friday… the lights go out… and the government partially shuts down.

All species of calamity would ensue…

Meantime, staffers at the Office of Thrift Supervision will have their own thrift to supervise for a change (until they receive their inevitable back pay for time missed).

The last government shutdown, in 2013, lasted 17 apocalyptic days before order was restored.

How we endured those dark times… we cannot recall.

Be not ye worried, however…

Federal workers deemed essential to the safety of the Republic will remain on in case of a shutdown — the customs official at Ketchikan, Alaska, for example.

The TSA will guard the aerial ways against infants, great-grandmothers and other such hellcats.

In event of national invasion… we’ve been assured the Marines will act.

Social Security checks will be mailed.

But the question lingers:

Can Congress skirt a grievous shutdown this Friday?

To purchase them, they would take the budgetary scalpel to programs for science, the environment, education… the arts.

Nondefense spending should match any increase in military spending, they wail.

And unless the plan fails to protect the controversial Deferred Action for Childhood Arrivals (DACA) program, Democrats pledge to withhold their favor.

Where stands the American president?

He would “absolutely blame the Democrats.”

In August, Trump threatened, “even if we have to close down our government, we’re building that wall.”

Democrats would sooner munch radioactive glass than fund “that wall.”

Our investigations yield no reason to expect eight Democratic defections.

The president likely won’t get funding for his border wall because Democrats will block it. Republicans need Democratic votes in the Senate in order to fund the government because 60 votes are needed to advance spending measures in the upper chamber, where Republicans only have 52 members.

I’d say the odds are 50/50. Actually, I put the odds of a shutdown at about 55%. There’s certainly enough substance here to be wary.

In the meantime, markets watch… and wait.

But what’s this? Another possible delay?

Should a deal prove impossible by Friday, House Republicans have hatched another continuing resolution.

This one keeps the government a going concern through Dec. 22.

That is, it would give the warring parties two extra weeks to negotiate a budget… until another continuing resolution is required.

“Never underestimate the ability of Washington to kick the can down the road,” affirms one Republican congressman.

We don’t, Congressman. We don’t.

The House could vote on the can-kicking gimmick as soon as tomorrow.

It would then move to the Senate.

And so the Cinema of the Absurd prepares a sequel… and American governance completes the circuit from comedy to farce… to third-rate carnival.

Congress would never allow a government shutdown that actually delivered on its promise.

The combat before us is thus reduced to a sham, a professional wrestling match with its artificial blows and pre-arranged outcome.

The other plays an identical game.

That seventh grader from Topeka turned away from the Smithsonian is the hostage each dangles before the other.

Here is American politics in its unshirted glory, shining so brightly it blinds the world.

If you expect officials to make courageous choices guided by principle, if it’s statesmanship you seek, do not look to Washington.

It is the wrong address.