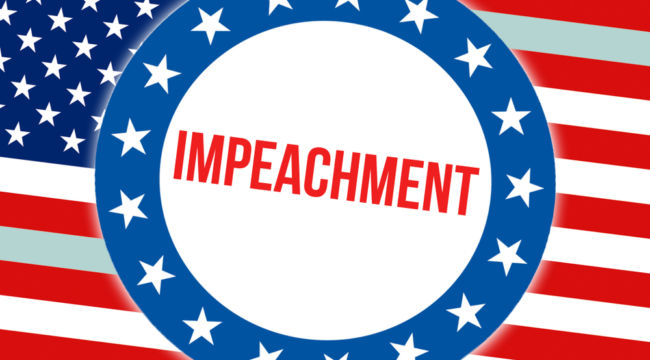 Impeachment: What You Need to Know

As we all know, impeachment talk is dominating the news. That’s too bad, because there’s no shortage of other critical news from Syria to Iran and Hong Kong.

I don’t consider Friday’s “trade deal” critical news because it didn’t really accomplish much of anything and no progress was made on the key issues.

But that aside, this is the bitterly partisan world we live in so we’ll just have to get used to it.

The Democrats seem to have gone through what physicists call a “phase transition.” This is what happens when water turns to steam or a snowpack becomes an avalanche. The particles are the same, but the system dynamics have radically changed.

The House of Representatives has wanted to impeach Trump since before he was sworn in, but they couldn’t pin down a set of charges.

Now the phone call between Trump and the Ukrainian president has radically changed the dynamics and impeachment seems inevitable.

A Matter of Interpretation

Democrats say the call was an invitation to a foreign power to intervene in the 2020 election by targeting Joe Biden.

Staunch Republicans say the call was friendly and pointed to 2016 bad acts and that there was no quid pro quo. They and right-wing advocates have supported Trump against the impeachment threat and criticized Democrats for trying to remove a president from office based on a nothingburger conversation.

There’s no point in reciting the pros and cons. And you’re free to support whichever side you want.

The point is there’s no middle ground. Both sides have their narratives and never the twain shall meet. All that matters now is politics and votes.

The Democratic impeachment momentum is unstoppable and the 218 votes needed to impeach are rapidly falling into line. Expect an acrimonious six weeks and impeachment before Thanksgiving.

No Chance of Senate Conviction

The articles of impeachment go to the Senate for a trial. Republicans have 53 votes in the Senate. It takes 67 votes to remove a president from office. If all 45 Democrats and two independents vote to remove, it will still take 20 Republican defectors to remove Trump.

That won’t happen, not even close. In fact, Senate Majority Leader Mitch McConnell and Judiciary Committee Chair Lindsey Graham have said the “whistleblowers” will have to testify publicly and Hunter and Joe Biden could be called as witnesses.

The entire trial may be wrapped up in a matter of days and finished before Christmas. Trump will have the last laugh. But it will be a rocky ride between here and there.

That view comes as no surprise.

What is surprising is when distinguished law professors from preeminent liberal institutions say the same thing.

Eric Posner is a professor of law at the University of Chicago Law School (where Obama once taught) and the son of Richard Posner, a legendary federal court judge.

He’s a prolific legal writer and the author of 12 books and hundreds of peer-reviewed legal articles. He is the fourth-most-cited legal scholar in the United States.

In short, Posner’s a distinguished scholar and no partisan hack. Yet his view of impeachment is that the Democrats are falling into what he calls “the impeachment trap.”

Posner says that the Democrats are wasting their time because the Senate will certainly vote to acquit President Trump and his popularity is likely to soar in the aftermath.

Posner says, “Impeachment has its own narrative logic: Once the Democrats initiate it, they either win or lose. If they lose, they will be seen as losers who wasted public resources for a futile goal.”

Posner also asks why Democrats would even pursue impeachment if they will lose in the end and if Trump’s popularity is likely to increase.

The answer is that many Democratic members of Congress fear primary challenges from the ultra-progressive left if they do not vote for impeachment.

In other words, moderate Democrats are being driven to immoderate actions by extremists in their own party even if the process helps Trump. Welcome to the looking-glass world of 21st-century politics.

Your politics are your own business and I’m not trying to influence what anyone believes or how they vote. I’m just calling it as I see it.

The presidential election is a year away. Which way are the American people leaning right now?

I follow political polls, but only after I’ve deconstructed the polling methodology and recalibrated the polls based on my best estimate of what they really say. Let me explain.

Polls are valuable in theory but flawed in practice. The flaws include oversampling voters of one party relative to their actual percentage in the electorate, oversampling minority groups with a disproportionate tendency to vote for one party over another, sampling “all voters” or “registered voters” instead of “likely voters” and other techniques that skew results to one party or another.

For example, Democrats have an edge over Republicans in registered voters.

That edge (ignoring independents for this purpose) is about 54% to 46%. But pollsters survey a sample of 58% Democrats to 42% Republicans. Within the Democratic oversample, there’s another oversample of minorities with a 90% track record of voting Democratic.

That skew undersamples white Democrats who might vote Republican. There are many other examples, but you get the point.

The good news is that when you study the methodology and reverse-engineer the poll, you can come up with useful results for purposes of forecasting.

A new Investor’s Business Daily poll exhibits some of these flaws (it polls “adults” rather than registered voters), but it still has its uses when adjustments are made.

Trump does much better in this poll than many others. In a direct matchup with Elizabeth Warren, 49% of independents backed Trump, while 43% supported Warren.

What’s important analytically is not the spread but the trend. Voters are moving in Trump’s direction despite impeachment efforts.

Even a flawed poll has its uses if you put it in a time series of similar polls. Trump needs all the good news he can get these days, and this poll is one ray of hope.