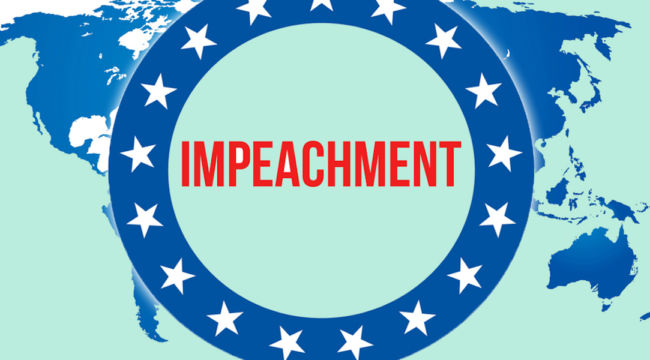 Before proceeding, we must first confess to a boo-boo.

We forgot temporarily our civics lessons yesterday… and neglected to reach for our pocket Constitution.

We stated the Senate required a simple majority to convict a president on impeachment charges.

Article I, section III would have reminded us that conviction requires a two-thirds majority — not a simple majority.

I normally find your articles interesting and sometimes enlightening, but this is almost beyond the pale. Have you ever heard of checking your facts? To convict a president of whatever the House of Representatives decides might be an impeachable offense requires a two-thirds vote in the Senate, not 50 +1! Send someone to read the Constitution, please, before you write an error like that. So not four but 20 Republicans would have to defect to the other side for that to happen, even if the House found something real to impeach Trump on, instead of this Ukrainian fantasy they’re currently trying to “Trump up” now that the Russia-gate hoax has fallen through after wasting $30 million of our tax dollars and a couple of years of potentially useful legislative time.

I’m disappointed in you.

To which we can only reply: Nostra culpa. Nostra maxima culpa!

Impeachment conviction by Senate requires a two-thirds vote to impeach by the Senate. Can’t believe you didn’t know that which means conviction very unlikely.

A third let us down rather more gently:

The story implies it takes a majority to convict a president. Not so. The Constitution requires a two-thirds majority. They’d need a boatload of GOP senators to become turncoats and convict DJT!

Still other readers recalled your chastened and humbled editor to his error.

But to the larger question…

Should Trump be impeached?

The “nays” have it — by two-thirds majority!

We lack the space to reprint all of your responses. But here is a representative sampling:

He will not be impeached. For now he does not deserve to be. If he manages to stay out of his own way, Trump will be reelected unless Warren, presumptive Dem nominee, eases back on her anti-Wall Street rhetoric, in which case she may topple Trump.

If the question is whether he should be impeached for the phone call, it’s a dumb question. The political snitch (who does NOT meet the legal whistleblower criteria) who started the disinformation has already admitted he had no firsthand information. He was also found to be (like in the dossier case) a political operative. The phone call transcript demonstrates nothing compared with Biden’s videotaped, full-color confession.

The Democrats should not try to impeach The Donald. So far we have a “whistleblower” who passed on second-hand information in order to get an investigation started and wants to remain anonymous. Does this sound familiar? I honestly think that the Democrats cannot believe we the American public actually chose someone outside the swamp to be our president. They cannot understand we have rejected them and their corrupt games.

Trump will be impeached, in part because the Democrats surely will go into convulsions and spontaneously combust on national TV if they don’t have something to show for going on three years of bluster and blather. Sadly — for them, anyway — there is virtually zero chance of a conviction in the Senate…

Should he be impeached? For what, doing what his predecessors surely did, and what that sleazoid Biden himself did — and bragged about, as your article pointed out? That was even worse, and goes to show he’s just as arrogant and stupid as he is slimy… So, sure, impeach the current president for it — if all the others who did the same and worse are brought up on charges as well.

Thanks, your daily is one of my two primary sources for news. Keep it coming.

Next is Bryan L.:

This is just Russiagate Part II. After they found nothing on Trump, I was done with news. Done giving them my most valuable asset: time. Even independent channels are being compromised (you guys seem to be the only ones who haven’t been).

I am a subscriber and voted for President Trump. I am also retired from the USAF, with prior service in the U.S. ARMY.

I believe the deranged DEMs WILL IMPEACH Donald Trump, but like the impeachment of Bill Clinton, it will fail due to the Senate’s unwillingness to convict and remove him from office.

I also believe that should Warren be the nominee, her policies will be “a bridge too far” for many in the electorate and her candidacy, combined with the failure to remove TRUMP from office, will lead to his reelection. This is based on a perception by voters that the DEMs have done NOTHING BUT INVESTIGATE AND OBSTRUCT Trump since he assumed office.

Yet reader voting was far from unanimous. Several voted “yea” — Trump should be impeached:

I don’t like your partisan headline. After what we learned today about Trump’s efforts to extort a foreign government to interfere in our elections (a crime if proven), please do not stoke the fires that the White House fool will bring to ruin in order to stay in power. Yes, it will have a depressing effect on equities. I’m more concerned with the effect on the country if this miscreant is allowed to hold on to power and in so doing severely damage the country, which he could care less about.

Trump should be impeached and convicted. I followed the entire Nixon fiasco and in my opinion, this whole mess seems to be worse and developing a lot faster. It didn’t take long for the attempted cover-up to be exposed, either. The man is toxic and his “team” will abandon ship quickly as he continues to flail about. He kind of asked for this the way he has treated people.

Gary B. claims, with emphasis:

He is so corrupt in so many ways. He has gotten rid of all advisers who actually knew anything about global politics, has profited from the presidency by having people stay in his properties and has excited all the bigots in the U.S. He does not believe in global warming while the ice caps melt and the temperature goes up!

Frankly, he is helping to destroy the earth!

The final “yea” goes to Doris B:

I can only hope that I don’t have to see this despicable man any longer.

And so concludes our reader survey. We thank you again for your input… and admonishments.