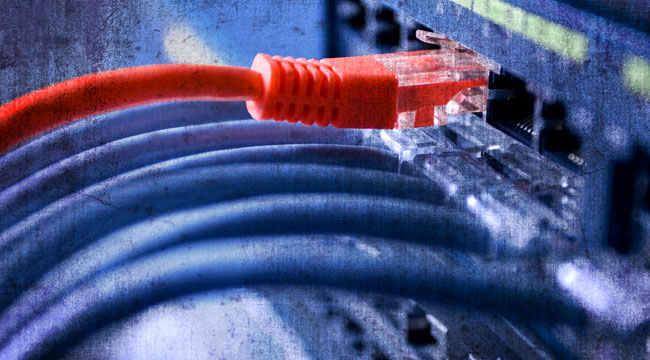 "If They Want to Get You, They Will Get You in Time"

What a weekend it’s been, like watching a global prizefight of epic proportions, with every conceivable side throwing the hardest possible punches.

It began with the first leak in the U.K.’s Guardian, which was echoed in The Washington Post. The specific allegation was that the National Security Administration has obtained “direct access” to all communications records of every American by working directly with Verizon, Google, Facebook, and every other major provider.

That revelation, courtesy of journalist Glenn Greenwald, that the NSA demanded that Verizon turn over all its records on an “ongoing” basis kicked it all off. The Washington Post published a PowerPoint presentation on a program called PRISM, created in 2007 as an effort to collect and store data on every American.

Then, the denials came from the websites and providers. They called the revelations outrageous and ridiculous.

“Google does not have a back door for the government.”

Apple: “We have never heard of PRISM.”

They all said the same thing. They provide information to the government only in response to specific warrants from the government, and they frequently fight against them.

But skeptics noted that they parsed their words carefully. The phrase “direct access” kept coming back. Besides, what if they are under some legal obligation to lie about what the government knows and can know? Worse, what if the NSA has a direct portal to their services and even the CEOs don’t know about it?

Is this paranoia at work? Well, the Obama administration did everything it could to fuel the frenzy even further, not by denying or denouncing the spy state, but by blasting the leaker himself!

“The unauthorized disclosure of a top-secret U.S. court document threatens potentially long-lasting and irreversible harm to our ability to identify and respond to the many threats facing our nation,” said James Clapper, the director of National Intelligence. For this reason, he found the revelations “gut-wrenching” — not the information contained therein, but that fact of its release!

Clapper joined the whole bureaucracy of spooks to swear he would get this leaker. That response seriously backfired by seeming to confirm all the truth of the leak itself — making the CEOs look like liars or fools.

Then suddenly, it ended.

The leaker himself — an articulate and compelling young man named Edward Snowden — posted a YouTube video that sets a new standard for what is considered “viral.”

This 29-year-old genius worked at Booz Allen Hamilton, a contractor with the NSA that advertised its data-collection and storage services. Booz, which employs 25,000 people, has a revolving door with the national security state: The past head of the NSA now works at Booz, just as the current director of National Intelligence once worked at Booz.

Snowden was not the product of an elite education. He had been a code geek who never bothered much with the classroom. He had signed up for the Army, but became disillusioned and was fortunate enough to be discharged. He then worked for the CIA and, finally, with the NSA. He could no longer stand what he was seeing: the sheer intrusiveness, the aggressiveness, the presumption that the data of every citizen belongs to the government.

So he took information about the PRISM program and the NSA’s ambitions. Then he left. Then he leaked. That he would reveal himself on camera for the world to see — in temporary safety in Hong Kong — is nothing short of marvelous and thrilling for its sheer heroism.

In this interview, he explains why he decided to expose the “architecture of oppression.” He confirms the worst fear: “I, sitting at my desk, certainly had the authorities to wiretap anyone, from you or your accountant, to a federal judge, to even the president if I had a personal email.”

Here is the full interview. You can immediately see that this wonderful young person is just like you and me, or perhaps our sons and daughters. This is the real thing. And his response to what he saw around him was completely normal. He just began to feel really squeamish about what was going on.

Q: Do you have a plan in place?

A: “The only thing I can do is sit here and hope the Hong Kong government does not deport me… My predisposition is to seek asylum in a country with shared values. The nation that most encompasses this is Iceland. They stood up for people over Internet freedom. I have no idea what my future is going to be.

“They could put out an Interpol note. But I don’t think I have committed a crime outside the domain of the U.S. I think it will be clearly shown to be political in nature.”

Q: Do you think you are probably going to end up in prison?

A: “I could not do this without accepting the risk of prison. You can’t come up against the world’s most powerful intelligence agencies and not accept the risk. If they want to get you, over time they will.”

Q: How do you feel now, almost a week after the first leak?

A: “I think the sense of outrage that has been expressed is justified. It has given me hope that, no matter what happens to me, the outcome will be positive for America. I do not expect to see home again, though that is what I want.”

Listening to him, you hear the voice of a new generation. There is no fear. There a humane quality to his thinking. He believes in openness. He thinks that one person can make a difference. He has the human right to try. His voice is that of Rose Wilder Lane in her great book The Discovery of Freedom.

And fortunately, today, using the very communication systems that government is apparently so dedicated to monitoring, he was able to get his message out to the entire world — without gatekeepers like the NSA.

His approach of going out into the open this way is itself fascinating. He probably figures that he is safer doing it this way than finding a spider hole somewhere in which to live, where he would eventually be found and then shot. Going public allowed him to control the message. It affords him the best chance to make a difference.

This is bravery, but he is probably correct that it is more effective and safe.

His example should be instructive for anyone who is following the stream of revelations and trying to sort out the meaning of it all. One response is to shut down in feature, to stop using Facebook, Yahoo, Google, and even your smartphone. You can drop out of modernity completely, move to Walden, and hide until you die.

To me, that is not an answer. In effect, that is letting the surveillance state win. Your quality of life is destroyed, and to what end? They can still get you if they want you. A smarter and better approach is to use all services but remember what everyone should have figured out long ago. The Internet is a public medium. If you want secrecy, you have to use public-key cryptography with services like Cryptocat and the Tor browser.

Snowden himself sums up this view: “I have no intention of hiding who I am because I know I have done nothing wrong,”

We’ll know more in the coming months precisely about the nature of the data collection going on. But that anyone should be shocked about the NSA’s goals and methods is supremely naive. The first major book on the NSA that exposed its goal came out fully 30 years ago (The Puzzle Palace, by James Bamford). Nor should anyone believe that the purpose of all this surveillance is to “protect our nation.”

The purpose is to protect the state.

There ought to be a hall of fame for people who have made huge strides in the fast-forward breakdown of the nation-state in the digital age. Julian Assange. Bradley Manning. Cody Wilson. And now Edward Snowden. The times when the powers that be could just “body bag” a person like this are over. Today, this man is probably more popular than every member of Congress, and certainly more popular than his agency-based oppressors.

If you want to understand the rational, sensible attitude of truth-telling defiance that shapes the mind and life of a man like Snowden, read The Discovery of Freedom by Rose Wilder Lane, a Club selection of Laissez Faire Books.