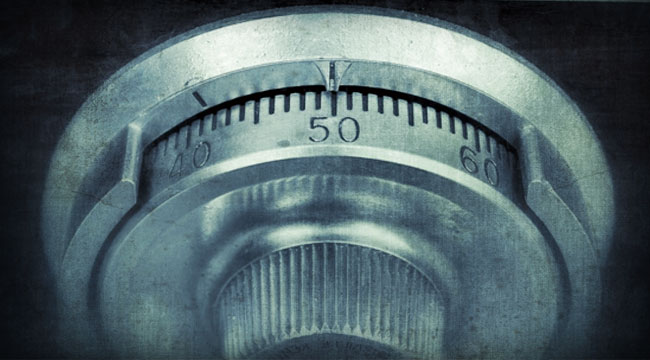 Do you think executive pay correlates with stock performance?

In other words, do you think companies pay their executives more when their stock price goes up and less when it goes down?

At the London Value Investor Conference, Mason Morfit of ValueAct shared his answer: No.

ValueAct manages about $14.5 billion. It is a famous activist investor. Meaning, ValueAct takes a position in a company and then tries to use that influence to change something about the company.

One of the things it looks at it is how CEOs get paid. For most, how they get paid has little to do with shareholders. ValueAct did a study and found almost no correlation between CEO pay and shareholder return.

When ValueAct gets involved in a company, this is something they try to fix.

Valeant is one example Morfit talked about that worked. They made the CEO, Michael Pearson, buy $5 million of stock. “And then,” Dan McCrum of the Financial Times reports, ValueAct “set up a plan where if [Pearson] delivered less than a 15% total shareholder return over three years, he would be the worst paid CEO in the market, but if it was over 40%, he would be the best paid. Valeant did something like 85%.”

That’s the power of a good pay scheme.

I read a lot of proxies, which are public filings in which companies disclose their incentive pay, among other things. I can tell you there are a lot of bad pay schemes out there. But there are some really good ones.

Take Pulse Seismic (PSD:tsx) for example. It has a model plan.

It ties executive pay to free cash flow per share. This free cash flow is what Pulse can use to repay debt, buy back shares and pay dividends. The more free cash flow Pulse generates, the more the top guys get. It’s simple and fair.

Here is a chart that shows pay plotted against free cash flow per share: 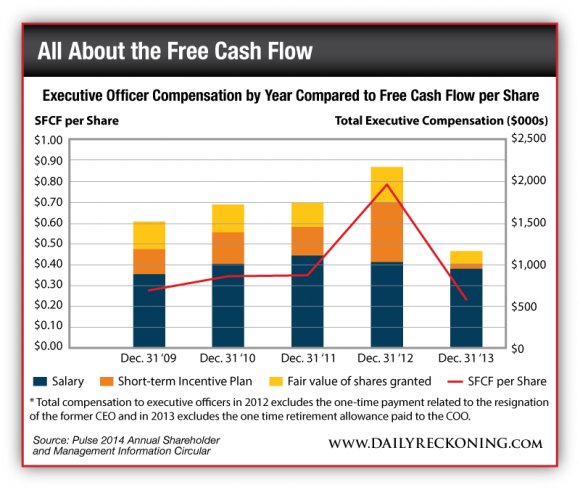 That’s all you can ask. When the company had a down year, as it did last year, the executives shared in that disappointment.

Pulse sells seismic data to oil and gas companies. Last year, data sales were just $27 million. This was less than half the $64 million sold in 2012. Data sales are hard to predict and jump around all over the place. They depend on natural gas prices and exploration activity. Last year was a down year for both. But they will not stay down forever.

A longer-term look at the business puts 2013 in perspective: 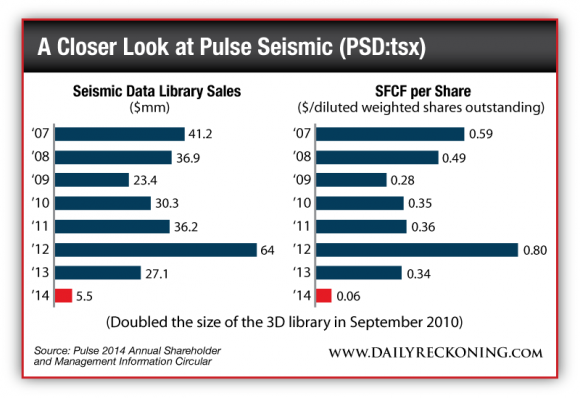 That’s the power of incentives.

Look at another example — one of my favorite companies of all time when it comes to incentives: Contango Oil & Gas.

Readers of one of my newsletters, Mayer’s Special Situations, have owned the company a couple of times. The first time around, we made a 106% gain. The second time around, we broke even.

Ken Peak was the brain behind Contango. (Author Charles Handy once wrote how we forgets sometimes that companies are originally the idea of a person or group of people. How many know that the great engineering firm ABB used to stand for Asea, Brown Boveri? “The names of real people, once,” Handy wrote.)

Peak’s story is ably told in a four-page document titled “The Contango Story” put out by the company in August 2010.

Peak founded the company in 1999, when he was 54 years old. He invested his life savings of $400,000 and raised $5 million in seed capital. The company raised $55 million over the next several years. But the value created far exceeded that, as you’ll see.

Peak knew the value of incentives. “Everything is possible when integrity and intelligence are combined with the right incentives,” he writes. “Incentives drive behavior.”

Contango focused on the Gulf of Mexico. And it focused on that part of the oil and gas business that creates the most value – the funding and drilling of an exploratory well to create reserves. This is where you make the most money — when you sink a well and find a bunch of reserves that didn’t exist before. Everything else Contango outsourced. The company had only eight employees.

Peak paid himself a modest salary — only $150,000 from 1999-2009. When he got a bonus, he used it to buy stock. He owned 19% of the company. Officers and directors owned 23% of the stock. His geoscientists, charged with finding oil, received no compensation unless they were successful.

That’s a great model. And how did it play out for shareholders?

My point is that incentives matter.

You could improve your investing a great deal by paying attention to them. Focus on those ideas where the incentives of management line up with shareholders. Our owner-operators have great incentive if only because of the substantial amount of stock they own in the companies they run.

Ed. Note: There were two surveys on CEO compensation that were released this morning. We covered both of them in today’s Daily Reckoning email and revealed a strategy to make 50% or more in the same way executives do. If you weren’t signed up, you didn’t get the info. We don’t post that analysis on this site either. So click here right now to sign up for FREE — it’s the only way you won’t miss out on 50% of material we publish.