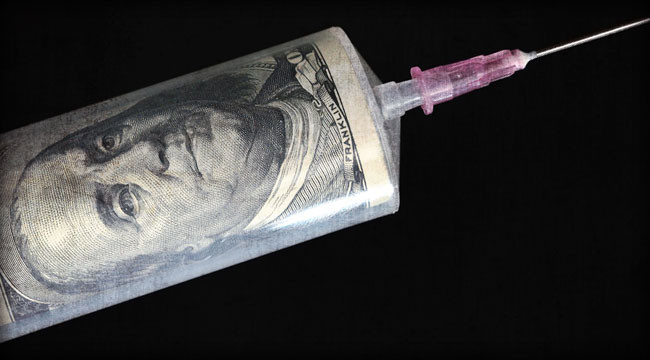 How to Make a Market Melt-Up

The market has called Bernanke’s bluff. The melt-up is on. After spending the past few months trying to convince the market that the U.S. economy is improving, putting an end to QE and zero interest rates, the market isn’t buying it.

It’s seeing more of the same. That is, an economy keeping its head above water, which keeps inflation subdued, which gives Bernanke cover to maintain his $85 billion per month QE program. It doesn’t get much better for the speculators… and make no mistake, it’s the speculators driving this market.

To new highs, we might add. As The Wall Street Journal reports:

As we said, it’s a melt-up. The economic news is just good enough to keep the speculators in the game, but not so good it brings about any real fear of tapering… or any lasting fear, at least.

To give you an idea of what passes for acceptable these days, Chinese manufacturing data buoyed the market yesterday because it came in at 50.3… only just signaling expansion (anything over 50 indicates expansion). At the same time, the “nonofficial” HSBC reading came in at an 11-month low of 47.7. The market chose to go with the glass-half-full viewpoint, no doubt influenced by Bernanke’s very dovish monetary policy statement that preceded it.

Regardless of Bernanke’s words, the Asian region remains a drag on global manufacturing growth. Here’s a summary of the manufacturing PMI data from JP Morgan:

“In contrast, output growth hit a four-month high in the U.S., near 2½-year high in the U.K. and returned to expansion for the first time since February 2012 in the eurozone.”

So while most of the traditional global manufacturing centers appear to be slowing, it’s the highly indebted developed nations generating growth. Maybe QE works after all!

We jest, of course. QE doesn’t solve anything. It gives the appearance of solving problems in the short term while it studiously works away at long-term ruination.

Our friend Dylan Grice (who presented at Port Phillip Publishing’s inaugural investment conference in 2012) wrote about this in the latest issue of the Edelweiss Journal. Citing Nassim Taleb’s recent book, Antifragile, Grice says, “Before each episode of instability was an episode of stability.”

But the problem is that the episode of stability is a manufactured one. A bit like QE. It’s stabilizing the situation for the time being… For how long it can do so is the question.

This makes it terribly hard for investors (as opposed to speculators) to make rational decisions in today’s market. People with a sense of history know this will all end in tears. But the question is when. Do you run with the bulls and risk getting trampled or sit on the sidelines and miss out on all the fun? There is no easy answer to these questions.

Our mate over at Money Morning, Kris Sayce, has remained steadfast in his belief that central bankers will continue to pump asset prices higher. But even the biggest bull in the office reckons you should punt around only 10% of your capital on small caps.

And then you have to take into account that Australia isn’t the U.S. Our financial market hasn’t (yet) taken over government and the RBA, and it can’t do much about our proximity to China.

This is why the Australian share market isn’t “melting up” in the same way as the U.S. What’s more, we have a dysfunctional government scrapping their way toward an election, introducing new taxes almost daily as their finances deteriorate just as quickly.

The Financial Review reported that in the current financial year, the federal government’s revenues could be around A$30 billion LESS than previously expected. To plug this hole, the government is making changes to Fringe Benefits Tax, tobacco excise and, as announced last Thursday, an insurance “levy” on bank deposits.

Of course, any such levy will be passed on to savers, providing another disincentive to be financially prudent. It’s argued that Australia should impose a levy, because, well, other countries around the world have one too. But it’s insurance savers are forced to pay, whether they want it or not.

Does such a levy make the system stronger or weaker? Well, consider this. When a bank is insolvent, it means its equity holders are wiped out. That represents around 5-7% of the bank’s assets. After the equity holders, you have unsecured and secured lenders to absorb losses before you move on to depositors.

At a prudently run bank, with genuine lender of last resort backing from the central bank, it would be extremely rare to call on depositors to take a hit on a banking collapse. Not impossible, but rare.

Is it the government’s job to “protect” depositors? We thought that was the role of the bank’s management and board in running a prudent operation.

This is all about injecting “confidence” into a fragile global banking system. It’s not just a tax grab. It’s just another example of the abrogation of personal and corporate responsibility to the nanny state.

Make mistakes, but don’t worry… the government will bail you out. And if a bailout is never required? Will the government ever return the levy to the savers who paid it?

Of course not. So you’re forced to pay a levy you don’t want to pay, to receive protection you never asked for, for the government to eventually use in a totally unrelated way?

It reminds us of a quote a reader sent in earlier this week:

“I sit on a man’s back, choking him and making him carry me, and yet assure myself and others that I am very sorry for him and wish to ease his lot by any means possible, except getting off his back.” — Leo Tolstoy

Ed. Note: Long have we felt the weight of government on our backs. And over the years, he’s only grown heavier. Luckily, there are ways to lighten the load. Readers of The Daily Reckoning email have regular opportunities to discover the best investments available to fend off government intervention in their everyday lives. If you’re not yet receiving The Daily Reckoning email, you can sign up right here, for free.