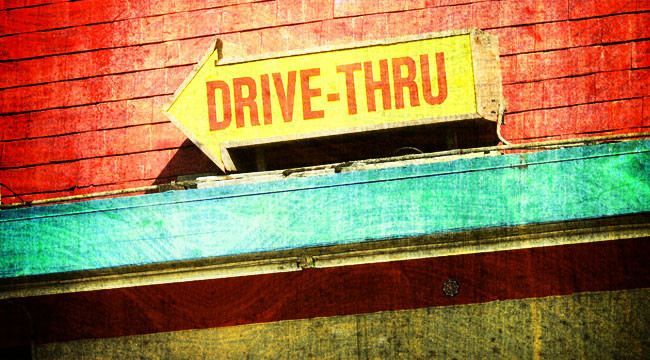 How to Fake a Fast Food Strike

Oh, how the media love a good strike. Look at these fast-food workers and peasants standing up to the owners of capital! They aren’t going to take the oppression anymore. The suits in the boardrooms had better shape up and stop hoarding all that money. They need to give it up to the men and women who are doing the work by giving them not $8 per hour, but $15. And they need to act now.

And so goes the media narrative on the “nationwide” walkouts from fast-food restaurants this week. Thousands of stories poured out in the papers and wire services. The signs, the screaming, the demands, the sad stories of exploitation, the reporters shouting over the yelling — it’s all a scene out of the old storybooks.

But wait just a minute, here. These people are demanding a doubling of wages? You don’t even have to study economics for more than a few seconds to see that this would be catastrophic for employment.

Think of it this way: What if the price of a Big Mac suddenly went from $4 to $8? Are you going to buy as many? McDonald’s can’t make you. Do a quick mental experiment and imagine what would happen to the demand for this sandwich. Well, in the same way, no one can force McDonald’s to buy labor at $15 an hour. Demand for labor would collapse. Bankruptcies would abound. People would suffer.

So what’s with these demands? Sure, everyone wants more money (universal rule!) but this is a horrible way to go about it.

If you look a bit more deeply, you begin to the see the hoax. There’s every indication that people outside the restaurants protesting didn’t actually work for the place they were protesting. It was a classic “rent-a-mob” situation, and the rent was being paid by political activists whose agenda has nothing to do with helping the average burger flipper.

These were mostly media stunts cooked up by the Service Employees International Union, which bused in these so-called workers as a fulfillment of a little charade and subsequent media blitz. The SEIU coordinates these protests with various professional worker groups and in conjunction with the press to make the biggest possible splash.

Notice that in the course of the protests, McDonald’s, Wendy’s and Burger King reported on no cases of actual shutdowns due to striking workers. A rare case was reported in Detroit, but it seemed to come and go. There were sporadic reports of some closings, but due more to the chaos than refusal to work. As Labor Notes reported, “A Qdoba Mexican Grill was entirely shut down when a crowd occupied the store. A Subway was unable to stay open because of a large crowd out front.”

In other words, the most these so-called walkouts accomplished was to block the entrances for consumers. As soon as the ruckus ended, consumers poured back in and workers happily served up the food and drink that people wanted.

That alone is enough to cause any objective observer to suspect a rat. Among all the media stories about these so-called strikes, only Bloomberg hinted at the reality: “Moments after protesters left a Wendy’s in downtown Manhattan, about 20 people piled into the store for lunch. When chanting strikers entered the Chicago McDonald’s, workers continued to pour coffee and bag food for a throng of customers.”

RealClearMarkets provided some more detail — and did so even before the protests began. In short, these were not workers, but pressure groups acting in a coordinated fashion through politically driven “workers centers” — Fast Food Forward and Low Pay Is Not OK — backed by the American Federation of Teachers, the new incarnation of the Obama-ite ACORN, and other highly politicized parasites:

“Fast Food Forward and Low Pay Is Not OK are allied with other worker centers, including Stand Up KC, Raise Up Milwaukee, Fight for 15, Central American Resource Center, MassUniting, Rally for 15, Atlanta Jobs with Justice, Flint-15. At Low Pay Is Not OK’s website, people can download a strike kit (“Download 15 Steps for $15/hour”) and a strike letter… Fast Food Forward activists do not have to worry about losing their own jobs, so they seek extraordinary wage increases of up to 100%.

“Fast Food Forward is funded by New York Communities for Change, which was set up in 2010 to replace the Association of Community Organizations for Reform Now, better known as ACORN. ACORN closed down due to financial shenanigans and scandal, but NYCC has the same address and leadership. Jonathan Westin, a former ACORN organizer, directs NYCC and Fast Food Forward.

“The SEIU has contributed over $100,000 to NYCC, according to documents filed with the Labor Department. These documents also show that NYCC received $353,881 from the United Federation of Teachers between Aug. 1, 2011 and July 31, 2012.”
If you want to follow the money further, you can trace Teachers Union dollars straight back to you and me in the form of the taxes we pay. So to some extent, this whole charade was a subsidized racket.

Stranger still, consider that these so-called strikes have no real end game. You can’t negotiate with an entire industry. Wages in these franchises are decided by the local owners, not dictated by the center. If McDonald’s corporate headquarters suddenly mandated a $15 minimum, it would stand in massive contract violation with the owners of the stores — robbing them of their rights.

It would never happen. But if it did, the result would be to bankrupt thousands of stores, throw possibly millions of people out of work, and do terrible damage to future job creation. These franchises operate on extremely thin margins as it is, and the owners never know for sure whether they are going to make it another year.

As for the workers themselves, they are mostly entry-level jobs, and some 75% of the new workers in these restaurants end up leaving for other positions after a year of work. In other words, these are brilliant places to get your foot in the door. They hire people who really need the experience and train them in money management, cooking skills, interpersonal skills, and the ethic of the commercial marketplace.

The agenda of these activists groups is to ruin this beautiful opportunity for people. And what’s the point? Well, labor unions of the sort represented by SEIU are nearly extinct in this modern, dynamic, entrepreneurial economy. They once dominated. Now, the percentage of private sector workers who are unionized is down to 6.6%. Even the rate of government unionization is collapsing by one-third.

Looking at this bigger picture, you can see that these stunts are really acts of desperation. The unions need to shore up their membership. They will do it at the expense of the poor, the low-wage workers, small-business owners, and consumers. They really don’t care. At this late stage, these near-death unions are willing to pillage anyone and everyone just to survive.

The mainstream press is not doing anyone favors by covering up the true racket here. The fast-food franchises are not owned and run by fat cats, but by mostly local business owners who scraped up enough money to take on a risky investment. They have suffered terrible economic strain over the past five years, with ever-increasing regulatory costs, higher minimum wages, and the constant threat of death by Obamacare.

Despite all this, fast food has been a growth industry — a bright spot in a dim economic landscape. This faked “strike” charade is the last thing they need right now. The trolls will always be with us. If only the attention-hungry press would learn to spot them and ignore them so business could get on with making the world a better place.