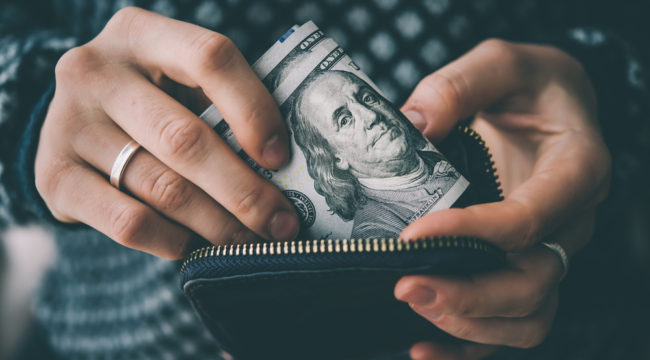 How to “Crash-proof” Your Portfolio

When I first wrote my best-selling book, An American Hedge Fund, several “financial experts” told me straight up that I was crazy.

They didn’t think average retail investors and traders would understand my niche strategy that, I’ll admit, was definitely not “buy and hold.”

That is the mainstream’s main investment strategy, a strategy that at best earns them 10% a year, maybe 20% in a truly exceptional year.

They tell you to save money for 30, 40 years and let your wealth compound over the decades.
Then you might have a chance of retiring with enough money, they say.

How are you supposed to give your family the good life you want to provide them while still saving enough for retirement?

The simple fact is that many people cannot.

No wonder a recent survey found that more than half of Americans have less than $10,000 saved for retirement, with one in three having nothing saved.

Think about that! How can these people ever retire?

Meanwhile, the average Social Security benefit of about $1,400 is an absolute joke. Good luck paying all your living expenses and medical bills with that pittance.

This is a crisis in the making.

But let’s say you’re approaching retirement and you’ve managed to have a nice nest egg saved up.

What if a market crash comes along and wipes out half your wealth practically overnight? It could take at least a decade to make it back. Or you might never be able to make it back at all.

How would you ever be able to retire? And what would happen to all your retirement dreams that you’d worked so hard for?

When the next stock market crash comes, I’m afraid that most people will be like a deer caught in the headlights.

They’ll lose everything again. And they’ll never have a chance to retire with enough money. I hate to even think about it. But to be candid, if you don’t prepare, that could be you.

And look, the crash will come. It’s not a matter of if. It’s just a matter of when. I think we all know that.

And if you’re just following a buy and hold strategy, you will get caught in the next crash, with 100% certainty.

That’s why I recently unveiled a powerful new strategy that can help protect you against the market crash we all know is coming — while making you thousands of dollars wealthier.

With this strategy, you might never have to worry about getting wiped out in a market crash again. I know that sounds like a stretch. But properly applied, it’s true.

Because your money’s not tied up in “buy and hold” investments that are highly vulnerable to a crash. You’re in and out before a crash can erase your wealth.

It’s a remarkable new strategy to make money on the weekends. Because the markets are closed on the weekends, the chance of you getting caught in a huge market crash is zero.

You’re in and out so fast that there’s no time for you to get caught in a crash. And your hard-earned money will never become that deer caught in the headlights.

The bottom line is that this strategy protects your nest egg against the coming crash, while at the same time allowing you to potentially collect thousands of dollars on the weekends. In fact, in a single weekend, you could collect up to 10 times the average Social Security monthly benefit.

One of them even made more than half a million dollars. Think about that — half a million in the last 30 days alone. All from trading penny stocks the way I do.

These are some of my advanced students, admittedly. But lately, some of my newer students who begin with just $2,000-$5,000 are having great success.

It’s really entirely up to you whether you want to succeed or not at trading. Nobody is forcing you at all. And that’s perfectly fine with me.

The beauty of being real in an industry full of scams is that I don’t need any doubters as students (as they, along with lazy students, make for lousy students that waste my time, making me repeat myself and not being willing to put in the thousands of hours required to truly become my next millionaire student).

So anyone is 100% free to ignore me and my weird strategy focused entirely on the little niche of penny stocks that 99.99% of the world hates on every single day.

But if you want regular returns of 100-200%, which you should, then you’re in the right place. You can learn to grow an account exponentially. 10% doesn’t move the needle if you only have $10,000 to your name.

But you’re going to need persistence.

It’s not about making millions or tens of millions of dollars in the first year or two. It’s learning and practicing good habits so that you can grow your account exponentially over time. And it takes time when you first start with just a few thousand dollars. That’s OK, it’s just reality.

My top students have only reached seven-figures only after several years and many hours of hard work and study.

It takes a long time to learn the rules, patterns and discipline to adapt to whatever opportunities the stock markets brings us each day, each week, each month, and each year. Then you’ll be ready to capitalize on only the best plays.

The first thing you should realize if you want to grow your account exponentially, it’s this:

Stop using any strategy that is mainstream. And avoid strategies where you can’t cut losses quickly (options trading); where there’s too much competition from the richest/most powerful people in the world of finance so your odds of success are pathetic (forex); and also avoid outright scams.

I’ve gotten into plenty of trouble calling out scams, but avoiding them has also saved me a lot of money.

The good news is that while it’s tough, it’s not that complicated if you follow my rules. You can understand everything within 1-2 years, or 3 years at worst if you’re slow like Forrest Gump.

Now, if you still think penny stocks are a scam despite everything I’ve shown you so far, I get it. I’ve heard it a million times.

Maybe you’ve lost money listening to one of the hundreds of con artists who pose as “penny stock gurus.” Or maybe Wall Street convinced you that you should be happy with 8–10% a year.

Now, in order to become a penny stock millionaire, you’re going to have to put in the time to study and learn. It’s that simple.

But if you have a small account and want to learn how to grow it exponentially, you can definitely do it. So many of my students have proven that’s true. And I started off with a relatively small amount of money also.

The next step is yours.

Tim Sykes is editor of Tim Sykes’ Penny Stock Millionaires. Tim turned $12,415 into $1.65 million through penny stocks trades while attending Tulane. He is founder of the popular social trading platform Profit.ly and writer of An American Hedge Fund: How I Made $2 Million as a Stock Operator & Created a Hedge Fund.