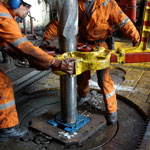 There’s an offshore “gold rush” happening right in front of our eyes.

In fact, if you add up all the bullion that’s been added to central banks over the past two years, the total pales in comparison to this offshore prize. We’re talking hundreds of billions of dollars here.

And my friend, it’s just the beginning — over the long run, we’re talking trillions!

Today I want to give you an inside look at this offshore “gold rush” – along with the best ways to play it. As you’ll see, the normal mining cast and crew — Barrick, Goldcorp, Kinross — aren’t the winners in this game.

Before we continue, though, allow me to come clean that I’m not talking about precious metal plays at all. Instead, I want to share with you what our intrepid in-house geologist Byron King calls an offshore “gold rush”… of oil.

Indeed, the hunt for the world’s next big black-gold treasure is on. Only in the next 12 months, the hunt for massive oil paydays is heading out to sea — in a big way.

“Fortunes will be made,” Byron says. And the way I see it, those fortunes are going to come sooner than most people think — starting right now in 2013.

Over the past few months, momentum for the offshore oil industry has been gaining. Spending on subsea equipment is expected to grow to a record $13.9 billion this year — a 66% jump from last year’s total, Quest Offshore Resources reports.

You and I both know that you don’t throw $14 billion/yr onto a wall and hope it sticks (heh, unless you’re Ben Bernanke or Tim Geithner). In other words, there’s a lot of smart money betting that the offshore oil industry is about to boom — this year… right friggin’ now!

This year is a standout – an anomaly – and mark my words, now’s the time to cash in on this offshore rush.

In fact, the whole scenario is playing out just as we’ve predicted…

First, let’s back up. In recent years, I’ve written about America’s (onshore) energy renaissance. In the most unexpected of events, America is bustling with oil and gas development. And where most analysts believed that we’d be importing stuff like natural gas and oil — we’re actually on track to EXPORT natural gas and higher volumes of petroleum products.

Ah, how the times have changed! America is getting a fortuitous boost at a time when it needs it most. Oil and gas wells are flowing, pipelines and railroad terminals are bustling and raw wealth is flowing from underneath American soil. (The same wealth explosion can’t be felt in locales like Europe or China, that’s for sure.)

As this unexpected boom evolved and money began to fill the coffers of the big oil companies involved — Exxon, Chevron, Statoil, Marathon, Hess, Shell and more! — a lot of that money went right back into exploration and development budgets.

More and more of that money is flowing directly into global offshore development.

You’ve got to understand that the U.S. has “more” oil and gas than it ever expected, but when you put our domestic shale boom in perspective of the global oil scene, you’ll realize that the boost in supply is peanuts (around 1% of global output).

“Just five years ago, we didn’t have the technology to find oil or even gain access that deep,” Byron King tells us. “Now we do. And suddenly, a few bold explorers are coming across huge, untapped resources.”

So while the U.S. enjoys a solid boost from onshore oil and gas development, this year’s big play in the energy market is offshore. Here’s a full excerpt from Byron:

“Today, deep water is a key focus of the international majors. The energy industry has new geological models and better geophysical technology and data. There have been vast improvements in signal processing and data crunching. And we are living through a time of absolutely revolutionary advances in drilling capability. What used to be just trackless, wave-tossed ocean is now prime oil patch real estate. It follows that today we are seeing phenomenal success rates for exploration with super-high-output wells.

“Some of the world’s most significant new discoveries are coming from deep water, such as offshore Brazil. You probably heard about the 8 billion-barrel Tupi field that Petrobras found last year offshore Brazil. That’s only scratching the surface. Almost every month or so, you see another report of remarkable new finds in the deep waters offshore Brazil. The reports come from the Brazilian state-owned company Petrobras, as well as from the likes of giant Exxon Mobil and major independents like Hess.

“But the deep-water energy provinces are not restricted to Brazil.You also see significant investment in the Gulf of Mexico, off West Africa, in the Mediterranean, in the North Sea and in the Asia-Pacific region, and eventually, you’ll see it in the Arctic.

“And it’s big oil! Close to home, some of the newest deep-water fields in the Gulf of Mexico are scheduled to produce nearly 250,000 barrels of oil per day when they reach peak output. It’s safe to say that there’s much, much more coming from the deep water of the world.”

To put Byron’s comments in perspective, think of it this way…

The Bakken oil formation in North Dakota — one of the great shale oil plays in America — will have “good” wells that produce 500 barrels of oil per day. Sure, that’s a lot of unexpected oil for the U.S., but compared with hundreds of thousands of barrels per day from an oil-rich offshore field, it’s like comparing a swimming pool to one of the Great Lakes.

Heck, just this week we saw news from Chevron. The company’s latest oil strike in the Gulf of Mexico sits 190 miles off the coast of Louisiana in 6,000 feet of water. But they’re keeping the exploration numbers close to the hip — and still running full steam ahead.

Also, this week, the French oil giant Total announced it is, essentially, looking for all hands on deck — seeking to hire drilling supervisors with any deep-water experience. Total has an “ambitious” deep-water exploration program commencing over the next five years, according to their deputy vice president of drilling.

Indeed, this whole global play is just coming together now.

“Big Oil” Isn’t the Only Way to Play This Rush

To be sure, it’s not just Big Oil that’ll be cashing in from this trend. Sure, we’ll see a nice bump in share price for each exploration well that pays off for Exxon, Chevron or Hess — but some of the higher gains will come from other offshore players.

The “picks and shovels,” or in this case the “pipes and valves,” will certainly do well.

After all, working on a drill plan 6,000-10,000 feet below the surface involves a lot of hi-tech precision. In this arena, as Byron King’s readers know well, you can look at companies like FMC Technologies (FTI), Cameron International (CAM) or Oceaneering International (OII).

These companies are to the offshore industry what NASA was to the space program. When Big Oil needs a part that “has to work” in the harsh underwater environment, they pick up the phone and call the names above — and later down the road, they cut ’em a big check.

Do you need a valve that can work at 10,000 feet? How about a safety shut-off system that can’t fail? Or in the case of a needed fix, how about an underwater ROV (remotely operated vehicle)?

These “pipe and valve” plays are the go-to guys for these types of underwater technologies, and in the coming years, look for a solid tail wind for their shares.

In the meantime, keep an eye to the sea. This year will prove to be the liftoff point for increased offshore activity — and the investment opportunities that follow!