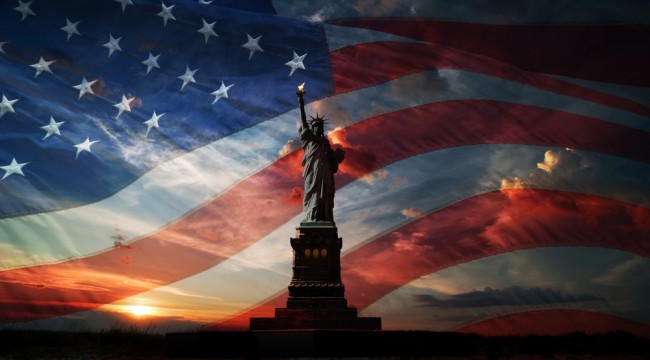 How the American Dream Can Make You 14-Times Your Money

You surely have an idea of what the American dream is all about. In essence, it’s the idea that anybody can get ahead in America through hard work.

The thing is that has nothing to do with the original American dream as described by the guy who coined the phrase. In fact, today’s version of it reflects what he feared would happen.

In what follows, I’ll reveal to you the original American dream. I think you’ll find it surprising. It is also easy to reclaim. And since I am, after all, the editor of an investment newsletter, I’ll show you an easy way to reclaim this dream to better your investing portfolio.

First, let’s get to the origin of the term. An American writer and historian named James Truslow Adams coined the phrase in the 1930s. He wrote:

“The American dream that has lured tens of millions of all nations to our shores in the past century has not been a dream of merely material plenty, though that has doubtlessly counted heavily. It has been much more than that.”

The genuine American dream was about one big thing: having free time.

Last year, professor Benjamin Hunnicutt wrote a book called Free Time: The Forgotten American Dream. He re-presents the traditional American dream and takes up Adams’ cause. “Over the last two or three decades,” he writes, “Adams’ ‘American dream’ has been virtually forgotten, his fears largely realized.” Adams worried that “in our struggle to ‘make a living,’” we were forgetting “to live.”

Adams’ vision of the American dream is the older vision. Even the Founding Fathers believed in it. John Adams wrote about how he had to study politics and war so his grandkids would have the time to study painting, music, poetry, architecture and other leisurely pursuits. Benjamin Franklin wrote about his vision for a society where people would work four hours a day “and the rest of the 24 hours might be leisure and happiness.”

The Founders were aristocrats, in their way, but the vision of the American dream ran deep to the lowest rungs of the economic ladder. As Hunnicutt shows, for working men and women across the country, the American dream meant “getting out from under the boss’s thumb a little sooner each day, having a few additional minutes down at the saloon with friends and finding a little extra time at home with the family.”

[T]he first step to reclaiming the American dream is to be a jealous guardian of your time.

The American dream became a centerpiece of the American labor movement, which fought for shorter working hours. Throughout the 19th century, American writers, religious leaders, politicians and many others supported labor’s vision of reducing working hours — and creating more free time.

This idea transcended left-right politics and was still powerful into the 20th century. Conservative business people also believed in defining progress and the American dream as one of more leisure. The cereal king W.K. Kellogg instituted six-hour workdays, for instance. So did Goodyear. There were others.

It was a “chorus of voices” Hunnicutt writes, “of diverse visions of how abundance and increasing freedom from work would soon open the original American dream to all.”

For a time, that was how society was going.

For over a hundred years, from the early 19th century to about the 1930s, American working hours steadily fell — “cut in half, according to most accounts.”

This trend was a given for most. If you read the leading thinkers of the day, they all thought the future would be one of very little work. Everyone from John Maynard Keynes to Frank Lloyd Wright predicted a world of abundant leisure. Doomsayers fretted about what people would do with all the time they’d have on their hands.

But the trend stopped in the Great Depression… and reversed itself.

Working hours have been creeping up, year after year. Some stats from Hunnicutt’s book:

We’ve lost the original American dream. How we got here would take us too far afield. (It is in the book if you really want to know. The New Deal, ironically, emerges as one in a cast of bad guys.)

But I believe in the value of that original American dream.

Time is our most precious asset. No matter what you do, you can’t get it back. That should be obvious.

So the first step to reclaiming the American dream is to be a jealous guardian of your time.

Here we come to investing.

Fortunately, the best way to invest for the long haul is also one that eats the least amount of your time. I have never really understood the appeal of people making daily or weekly trades in the stock market. They will never make any serious money. (I guess they could get lucky. Or be freaks.)

And who envies the life of these people? They are often crouched over their computers, watching the minute-by-minute action. It seems to me a frenetic and stressful way to live.

Why not spend more time studying companies at your leisure? And when you find one you like, you buy it. Then you sit on it. And do nothing — for years.

This gets to my No. 1 American dream investing idea: The Coffee Can Portfolio.

The idea is simple. You create a portfolio of six or seven or 10 carefully chosen stocks. Then you leave them alone for 10 years. Enjoy your leisure time. At the end of 10 years, you’ll likely have some monster winners.

The idea originally comes from Robert Kirby, a money manager. He wrote about it in 1984. He observed a portfolio that followed his buy and sell advice and another that never sold a share. At the end of a decade, the second portfolio had a single position worth more than the entire actively managed portfolio. It killed, in other words.

This shouldn’t come as a great surprise or need great proof. This is what Warren Buffett is all about. If you compound, say, a 15% return for 10 years, you’re up about fourfold. After 20 years, you’ll have more than 14 times your original investment. The math of compounding does not lie.

Tom Phelps’ study of stocks that went up 100-fold led him to one conclusion: “Buy right and hold on.” Stocks, like wine and cheese, need aging to really pay off. Not giving them a chance to mature is like pulling up your garden plants before the veggies come in.

Buying right is key. You need stocks that compound capital surely and inexorably over time. And you can’t pay absurd prices for them.

If executed correctly, the coffee can portfolio can help you enjoy the fruits of the original American dream — free time!

Kennedy Wilson (NYSE:KW) is one of my favorite “Coffee Can Portfolio” stocks.

KW buys real estate mostly from banks. These often represent deals gone bad for the banks eager to get rid of the assets KW buys. This creates a natural setting for picking up bargains. In the past, Kennedy Wilson has bought property in Japan after its great bust and U.S. property in the post-2008 rubble.

Right now, Kennedy Wilson is busy in Europe. There is a lot on sale in Europe, which, as you know, has gone through (and is still going through) some tough economic times. With the huge pile of debts the European banks must still work off, KW should have plenty to do for a very long time.

I love the story here. Kennedy Wilson reminds me a lot of another company called Brookfield Asset Management, which has proven a durable investment in tough times. KW follows the same kind of model.

But, owing to its smaller size and tighter focus, I think KW will deliver returns even better than Brookfield Asset Management over the next 10 years.

This is one to sock away for the long haul.

To the American dream,

P.S. Over the past 2½ years, I’ve shown people like you how to grow their wealth by 28% year after year. It’s enough to turn every $5,000 into $57,643 in 10 years. I outline it all in my free report called The Coffee Can Portfolio — The Safest Way to Grow Rich. And in today’s issue of The Daily Reckoning, I gave readers a chance to grab a copy for themselves, as well as a chance to discover seven more coffee can stocks to help grow any portfolio. Don’t miss another great opportunity like this. Sign up for the FREE Daily Reckoning email edition, right here, and start getting the full story.