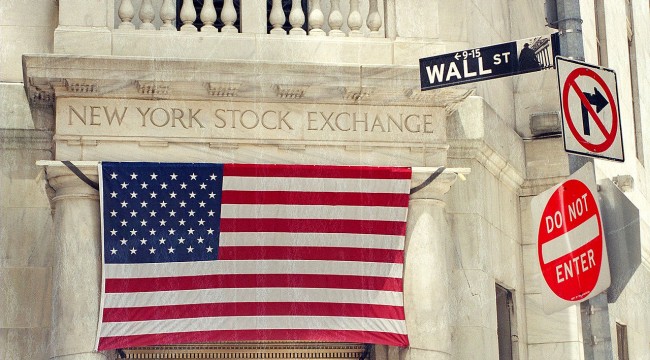 How Much Lower Will Bank Stocks Fall?

[This post was originally published on The Institutional Risk Analyst from R. Christopher Whalen – CLICK HERE for more from the publication.]

Since the November 2016 election, large cap financials have moved sharply higher, in the case of Bank of America (NYSE:BAC) up almost 60%.  This spasmodic upward movement in reaction to the election of Donald Trump reflected both the collective desire of professional managers to increase allocation to financials but also the shared frustration of investors with the chronic under-performance of large banks.

Let’s face it; there’s a whole generation of managers on Wall Street who made their careers buying big banks.  These torpid zombies may not have very good financial metrics, but the roar of the Buy Side crowd managed to push financials to more than a quarter of the market cap of the S&P 500 during the 2000s.

Today financials as a group are not quite half that portion of the broad market and for a reason: large banks are horrible financial performers.  Flat revenues, strained earnings and buckets of headline risk do not make for peaceful slumbers in the world of Buy Side managers.  Just look at the self inflicted wounds at Wells Fargo (NYSE:WFC).

And ask yourself if anybody, anywhere would have predicted three years ago that Warren Buffett’s favorite big bank would be clawing back CEO comp and, yes, effectively cutting off fingers and toes for public giggles.  Yeah?  Can’t make this stuff up.

Since BAC peaked a bit shy of up 60% on March 1st at a whole $25 and change per share, our favorite zombie girl has been giving back those hard won gains.  The House that Brian Moynihan kinda, sorta owns, by default, closed at below $23 yesterday and our guess is that the best performing large bank of the past six months will give up more in coming weeks.

Consider the fact that in the upward whoosh of the Trump Bump our friends at BAC actually outperformed the other large zombie banks and by a wide margin.  BAC is still up 40% since the election of Donald Trump, while JPMorgan is up a mere 25%, WFC under 19% and Citigroup (NYSE:C) right on 20%.  There are so many managers that have waited so long for Brian and BAC to take flight that they simply could not help themselves.

As we told Jeff Cox and our pals at CNBC the other day, our guess is that nothing in earnings this week or next is going to prevent these large cap financials from giving up more ground in coming weeks.

The fact that the Street has BAC with a up 9% revenue estimate for Q1 ‘17 can only be interpreted as an act of extraordinary generosity, especially when you consider that the full year estimate is just half that number.  But even if we assume 9% up revenue for the full year, admittedly an amazing suggestion, does the current market value of equity of BAC make sense on any planet in the solar system?

Then there is Citi, the laggard in the large bank peer group and for a reason.  The Street has Citi up 2% on revenue in Q1 ’17 and, wait, a whole 2.1% top line growth for the full year.  That is just 1/10th of the move in the stock since October.  But somehow the house that Bob Rubin almost destroyed single handedly in the 2008 will do plus 4% revenue growth in 2018?  You really have to respect Street analysts for their ability to see the bright side of the picture no matter what the actual numbers may suggest.

The Street has WFC up a whole 0.5% on revenue this quarter and 4.3% for the full year 2017, another act of selfless generosity based upon the bank’s shaky state of governance and the sharp decline in mortgage origination volumes.

We are still getting over the fact that WFC publicly got ripped a new orifice over hedging its mortgage book last quarter.  Like, really??  If the biggest mortgage bank in the world cannot hedge its mortgage servicing book, then why are we even here?  But then again, the shambles in the bank’s CSUITE really answers that question.

Then finally we come to the House of Jamie, JPMorgan (NYSE:JPM), which actually underperformed BAC in the upward surge we all know as the Trump Bump.  The Street has JPM up 3.3% on revenue in Q1 ’17 and a whole 3% for the full year.

Looking at the plus 25% for JPM at yesterday’s close, we need to ask the question. Even if Jamie manages to beat the +15% Street estimate for earnings, does the outlook for the business really justify a 25% move since October?  No it does not.

As the chart below illustrates, there is no real growth in bank earnings when you look at the industry as a whole.  The dollar revenue of interest earnings is rising, this due to the growth of bank balance sheets, but there is no corresponding expansion of income as a percentage of earning assets.  The top four banks discussed in the post account for about half of industry assets, so the general does inform the view of the particular. 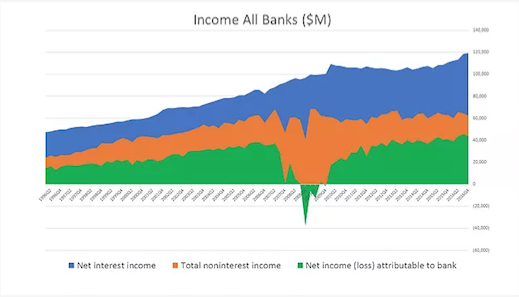 As we noted in the last issue of The IRA, the yield on earning assets for all US banks has been falling since 2008 thanks to the social engineering of Janet Yellen and her colleagues on the Federal Open Market Committee.

Quantitative easing is bad for the economy and for banks as well.  But don’t blame Jamie Dimon or Brian Moynihan for the stagnation of bank revenue and earnings.  That honor belongs to the FOMC, their colleagues among the ranks of the bank regulators, and ultimately Congress.

Give President Trump’s comments about deregulation and stimulative fiscal policy credit for driving up the value of financials generally.  And thank the generosity of credulous investment managers for the fact that large cap financials have not fallen farther faster as the exuberance of the Trump Bump fades.

Fact is, the Buy Side just loves the big banks, this even though the real value creation comes from smaller names.  But we continue to believe that in the absence of a remarkable increase in bank revenue and earnings this week and next, the market value of equity for the four zombie dance queens is likely to go lower in the near term as value and stock prices return to balance.