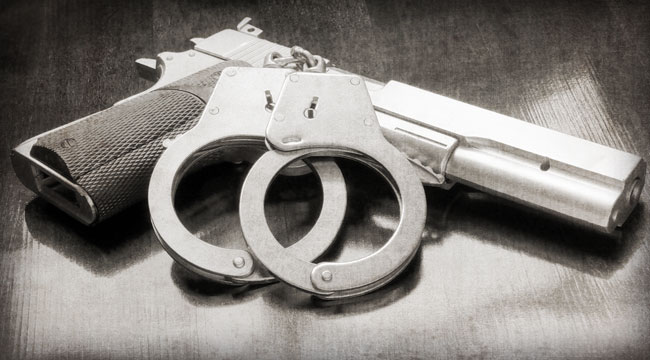 If, as libertarians believe, every individual has the right to own his person and property, it then follows that he has the right to employ violence to defend himself against the violence of criminal aggressors. But for some odd reason, liberals have systematically tried to deprive innocent persons of the means for defending themselves against aggression.

Despite the fact that the Second Amendment to the Constitution guarantees that “the right of the people to keep and bear arms shall not be infringed,” the government has systematically eroded much of this right. Thus, in New York State, as in most other states, the Sullivan Law prohibits the carrying of “concealed weapons” without a license issued by the authorities.

Not only has the carrying of guns been grievously restricted by this unconstitutional edict, but the government has extended this prohibition to almost any object that could possibly serve as a weapon — even those that could only be used for self-defense. As a result, potential victims of crime have been barred from carrying knives, tear-gas pens, or even hatpins, and people who have used such weapons in defending themselves against assault have themselves been prosecuted by the authorities.

…a handgun ban is just one more diversion of police resources from real crime to victimless crime.

In the cities, this invasive prohibition against concealed weapons has in effect stripped victims of any possible self-defense against crime. (It is true that there is no official prohibition against carrying an unconcealed weapon, but a man in New York City who, several years ago, tested the law by walking the streets carrying a rifle was promptly arrested for “disturbing the peace.”) Furthermore, victims are so hamstrung by provisions against “undue” force in self-defense that the criminal is automatically handed an enormous built-in advantage by the existing legal system.

It should be clear that no physical object is in itself aggressive; any object, whether it be a gun, a knife, or a stick, can be used for aggression, for defense, or for numerous other purposes unconnected with crime. It makes no more sense to outlaw or restrict the purchase and ownership of guns than it does to outlaw the possession of knives, clubs, hatpins, or stones. And how are all of these objects to be outlawed, and if outlawed, how is the prohibition to be enforced?

Instead of pursuing innocent people carrying or possessing various objects, then, the law should be concerned with combating and apprehending real criminals.

There is, moreover, another consideration which reinforces our conclusion. If guns are restricted or outlawed, there is no reason to expect that determined criminals are going to pay much attention to the law. The criminals, then, will always be able to purchase and carry guns; it will only be their innocent victims who will suffer from the solicitous liberalism that imposes laws against guns and other weapons. Just as drugs, gambling, and pornography should be made legal, so too should guns and any other objects that might serve as weapons of self-defense.

In a notable article attacking control of handguns (the type of gun liberals most want to restrict), St. Louis University law professor Don B. Kates, Jr., chides his fellow liberals for not applying the same logic to guns that they use for marijuana laws. Thus, he points out that there are over fifty million handgun owners in America today, and that, based on polls and past experience, from two-thirds to over 80% of Americans would fail to comply with a ban on handguns.

The inevitable result, as in the case of sex and marijuana laws, would be harsh penalties and yet highly selective enforcement — breeding disrespect for the law and law enforcement agencies. And the law would be enforced selectively against those people whom the authorities didn’t like: “Enforcement becomes progressively more haphazard until at last the laws are used only against those who are unpopular with the police. We hardly need to be reminded of the odious search and seizure tactics police and government agents have often resorted to in order to trap violators of these laws.” Kates adds that “if these arguments seem familiar, it is probably because they parallel the standard liberal argument against pot laws.”

Kates then adds a highly perceptive insight into this curious liberal blind spot. For:

“Gun prohibition is the brainchild of white middle-class liberals who are oblivious to the situation of poor and minority people living in areas where the police have given up on crime control. Such liberals weren’t upset about marijuana laws, either, in the fifties when the busts were confined to the ghettos. Secure in well-policed suburbs or high-security apartments guarded by Pinkertons (whom no one proposes to disarm), the oblivious liberal derides gun ownership as ‘an anachronism from the Old West.'”

Kates further points out the demonstrated empirical value of self-defense armed with guns; in Chicago, for example, armed civilians justifiably killed three times as many violent criminals in the past five years as did the police. And, in a study of several hundred violent confrontations with criminals, Kates found the armed civilians to be more successful than the police: the civilians defending themselves captured, wounded, killed, or scared off criminals in 75% of the confrontations, whereas the police only had a 61% success rate.

It is true that victims who resist robbery are more likely to be injured than those who remain passive. But Kates points out neglected qualifiers: (1) that resistance without a gun has been twice as hazardous to the victim than resistance with one, and (2) that the choice of resistance is up to the victim and his circumstances and values.

“Avoiding injury will be paramount to a white, liberal academic with a comfortable bank account. It will necessarily be less important to the casual laborer or welfare recipient who is being robbed of the wherewithal to support his family for a month — or to a black shopkeeper who can’t get robbery insurance and will be literally run out of business by successive robberies.”

And the 1975 national survey of handgun owners by the Decision Making Information organization found that the leading subgroups who own a gun only for self-defense include blacks, the lowest income groups, and senior citizens.

“These are the people,” Kates eloquently warns, “it is proposed we jail because they insist on keeping the only protection available for their families in areas in which the police have given up.” What of historical experience? Have handgun bans really greatly lowered the degree of violence in society, as liberals claim? The evidence is precisely to the contrary. A massive study done at the University of Wisconsin concluded unequivocally in the fall of 1975 that “gun control laws have no individual or collective effect in reducing the rate of violent crime.”

The Wisconsin study, for example, tested the theory that ordinarily peaceful people will be irresistibly tempted to shoot their guns if available when tempers are being frayed. The study found no correlation whatever between rates of handgun ownership and rates of homicide when compared, state by state. Moreover, this finding is reinforced by a 1976 Harvard study of a Massachusetts law providing a mandatory minimum year in prison for anyone found possessing a handgun without a government permit. It turns out that, during the year 1975, this 1974 law did indeed considerably reduce the carrying of firearms and the number of assaults with firearms. But, lo and behold! the Harvard researchers found to their surprise that there was no corresponding reduction in any type of violence. That is,

“As previous criminological studies have suggested, deprived of a handgun, a momentarily enraged citizen will resort to the far more deadly long gun. Deprived of all firearms, he will prove almost as deadly with knives, hammers, etc.”

And clearly, “if reducing handgun ownership does not reduce homicide or other violence, a handgun ban is just one more diversion of police resources from real crime to victimless crime.”

Finally, Kates makes another intriguing point: that a society where peaceful citizens are armed is far more likely to be one where Good Samaritans who voluntarily go to the aid of victims of crime will flourish. But take away people’s guns, and the public — disastrously for the victims — will tend to leave the matter to the police.

Before New York State outlawed handguns, Good Samaritan instances were far more widespread than now. And, in a recent survey of Good Samaritan cases, no less than 81% of the Samaritans were owners of guns. If we wish to encourage a society where citizens come to the aid of neighbors in distress, we must not strip them of the actual power to do something about crime. Surely, it is the height of absurdity to disarm the peaceful public and then, as is quite common, to denounce them for “apathy” for failing to rush to the rescue of victims of criminal assault.

Murray Rothbard
for The Daily Reckoning

Ed. Note: The Laissez Faire Today email edition is rooted in ideas that aren’t dictated by the political parties in power. And pulling articles and pieces from scholars like Murray Rothbard allows the editors of Laissez Faire Today to do just that. Join in on the discussion by signing up for FREE, right here.

Why the Government Hates Gold

Bill Bonner explains why gold stands in the way of the government and welfare statists, and the process of deficit spending…

Murray N. Rothbard (1926–1995), the founder of modern libertarianism and the dean of the Austrian School of economics, was the author of The Ethics of Liberty and For a New Liberty and many other books and articles. He was also academic vice president of the Ludwig von Mises Institute and the Center for Libertarian Studies, and the editor – with Lew Rockwell – of The Rothbard-Rockwell Report. Rothbard has made major contributions to economics, history, political philosophy, and legal theory, and is considered the principal Austrian theorist of the latter half of the twentieth century.