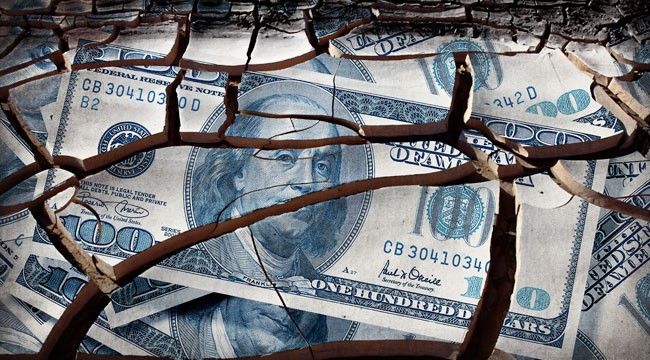 How, Exactly, the World Ends

Today, I’m going to tell you about the end of the world.

I hope I’m wrong about it. But sooner or later, I’ll be right.

In the meantime, I’m like a surgeon who has just botched an operation. He sees the patient stiff on the table and wonders if he should go back to the textbooks. Maybe the anklebone is not connected to the shin bone after all.

But the textbooks are hopeless. They’re written by modern economists. And they believe an economy is mechanistic, not humanistic.

These folks have fixes for every problem and wrenches in both hands. They also run our central banks. And they think they know what is going on… and what they’re going to do about it.

So they give you “forward guidance.” But it is worthless. Worse than worthless, it suggests knowledge and foresight — neither of which the authorities possess.

Do you remember the Fed giving us “forward guidance” before the crisis of 2008?

Neither Ben Bernanke nor Janet Yellen had any idea what was happening. They couldn’t give any forward guidance about that crisis and can’t give any about the next one.

They just react to events. They neither see them coming nor control them. And they have only one major reaction — even more credit.

But you can’t solve a debt problem with more debt. That’s what the Fed is offering. And that is what the European Central Bank and the Bank of Japan are offering too.

They are committed to this policy of providing more and more credit to a world that is already drowning in it. I should stop here and say a few words about how the economy really works.

These clumsy mechanics at the Fed, the European Central Bank and the Bank of Japan think they can turn knobs and adjust levers. But an economy is a complex dynamic system with intricate feedback loops.

It responds to the ham-fisted grease monkeys at central banks, but not necessarily the way the feds want. It is far more complex than they can ever understand, let alone control.

Right now, they are getting away with jaw-dropping policies. The markets are not yet punishing them. In fact, investors seem to be rewarding this kind of innovation.

For example, what is the 1.1% yield on a Spanish 10-year government note if not an invitation for trouble? Or how about a 10-year German government note with a yield of 0.2%?

It’s impossible to know what will happen exactly. But someone is going to lose money. These yields are unnatural. And downright dangerous.

But the risk is not just that the pace of consumer prices will outstrip these puny yields; it is also that bond issuers will default.

Europe’s governments are deeply in debt. And the ECB is now making it easier for them to go further into debt.

Europe’s bond yields are at their lowest level in 150 years. About one-third of the total new issuance carries a negative nominal yield (that is before you account for inflation).

What sense does it make for the ECB to drive yields lower still… by further pushing up prices? (Bond prices, remember, move in the opposite direction of yields.)

None at all — except that many European governments and corporations now get paid to borrow money!

And the clever Japanese have another trick up their sleeves. Not only is the BoJ directly propping up the market for Japanese government bonds. It’s doing the same with the stock market. Our head spins. But it’s true.

When it comes to overdoing it, nobody overdoes it better than the Japanese. Remember, near the close of World War II, when Japanese pilots strapped themselves to flying bombs?

Kamikazes took to the air hoping to die in a fiery explosion on the deck of a US aircraft carrier. Today, it’s Japan’s monetary policies that are kamikaze. The Bank of Japan is set to buy $1.4 trillion of government bonds under its current QE program. This allows the Japanese government to continue going deeper and deeper into debt.

But the BoJ has more explosives to strap onto its financial kamikazes. Why stop at buying bonds? Why not buy stocks too?

The BoJ has been a buyer of Japanese equity exchange-traded funds (ETFs) since 2010. And in September 2014, it bought a record amount of stock through its ETF-buying program. This makes it the single largest holder of Japanese stocks in the world — with 1.5% of total capitalization.

The BoJ chooses to buy the dips too.

I doubt this is because BoJ governor Haruhiko Kuroda is a value hunter. Instead, it is almost certainly because he wants to manipulate stock prices directly, just as he does with the bond market.

The BoJ has waded into the stock market one in every three days since 2010, reports the Wall Street Journal.

Where does this lead?

To a fiery crash!

As Yogi Berra would say, America is going to come to a fork in the road… and it’s going to take it.

Valuations are at extreme highs on Wall Street. Take Warren Buffett’s favorite measure — market cap to GDP. With an eight-month exception at the height of the dot-com boom (and you know what happened next), the value of all outstanding S&P 500 shares is the highest it has been relative to US GDP in the last 100 years.

Meanwhile, Deutsche Bank is warning that S&P 500 earnings per share will be flat this year when compared with 2014. Retail sales are down about 9% on an annual basis over the past three months. And the US GDP has slowed to an annual rate of just over 1%… with the possibility of a surprise recession on the horizon.

Besides, crashes and bear markets happen. This seems as good a time as any. When the next crisis comes, the fork in the road will be a choice. The Fed can either admit its policies have not worked… chuck them out… let interest rates settle where the market wants them to settle and let the free market do its work.

Or it can follow the Europeans and Japanese toward more aggressive intervention — including massive QE and direct stock buying.

I don’t think there’s any doubt about what it will do: It will go deeper into that heart of darkness.

In fact, I believe central banks and central governments now have revealed the full madness of their intentions. Well, maybe not the full madness. They haven’t thrown money from helicopters yet… but that will come.

Here’s what’s in the cards for central banks:

…and also to acquire real businesses.You’d have to be brain-dead (or a modern economist) not to be staggered by the audacity… the ballsy mendacity… and the incredibly big lie that undergirds the entire charade: that you can create money out of nothing and use it to pay for wars, schools, highways, and salaries for bureaucrats.

I recall Lenin’s quote: “The capitalists will sell us the rope with which we will hang them.”

Today, of course, the capitalists don’t even sell the rope; they give it away, for nothing.

Stock investors are getting rich. Bondholders are making money. The government can spend as much as it likes. And the voters are bamboozled by it; they think it helps make the economy work better.

This is going to be a hard habit to break.

So, here’s the gist of my conclusion: Governments won’t break the habit of getting something for nothing. It will break them.

It looks as though they’ve got the perfect hustle going. They create money to buy their own debt. But this doesn’t cause consumer prices to rise (at least how they’re officially measured). Everybody’s happy.

Obviously, that won’t work forever. I don’t care how many knobs you turn or how many levers you pull. It doesn’t work that way. Ultimately, you’re putting rusty nails on the ground… and you’re going to step on them.

Nobody knows. But I’m going to take a guess…

And here I’m no longer using my powers of observation to tell you what is going on. I’m using my intuition and guessing. The weakest link in the central bank chain, I believe, is credit. So let’s look at how this link might break.

In our modern economy, when we talk about “money” what we are really talking about is credit.

Banks create this credit ex nihilo (out of nothing) when they make a loan. It exists, for the most part, as a digital record on a computer network somewhere…

And unlike even traditional paper money, this credit can vanish as quickly and easily as it got here in the first place. Because it is purely digital in nature, you can’t hoard credit. You can’t put it in your safe. You can’t take a wheelbarrow full of it to the grocery store for a loaf of bread.

Credit depends on trust. (The word “credit” comes from the Latin “credere” — to believe or trust.)

So, when our financial system implodes — which is what always happens when there is too much debt — the machinery of borrowing and lending will seize up. No one will trust that he will get paid. Credit will simply disappear — trillions of dollars of it — overnight.

Then the end can begin…