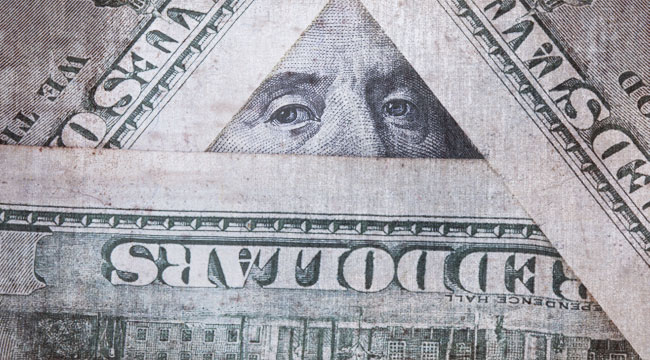 How a Pacifist Accidentally Infused the FBI with Cash

Back in 1972, when I was a 10-year-old technology and news geek in Chicagoland, a particular story grabbed my attention. Someone had planted time bombs in safe deposit boxes across the country. Their timing systems could be set up to seven months in advance — an impressive feat in 1971 — using common wireless electric clocks.

I returned to the story of the bomber, Dr. Ronald Kaufman, Ph.D., years later while researching a book. Looking for his dissertation, I stumbled across a fascinating double life that even Kaufman probably didn’t know he was leading. He shows up all over government budget requests and long-forgotten congressional reports — the types of headlines nobody sees because they’re almost too boring to think about.

I’ve learned two things at least: First, never underestimate the incompetence of the bureaucracy. Second, a fugitive bomber can always be “found” whenever security agencies feel shortchanged by their current budgets. The first might give you a measure of relief in the face of another IRS witch hunt and Edward Snowden’s revelations: The NSA might not be able to do too much with all those emails and text messages you sent. The second puts a damper on that: For one thing, that security we keep being promised — if we’ll just cough up a little more liberty in exchange — never quite seems to materialize. Unfortunately, there are no refunds.

For another, whoever’s spying on us can always find something to do with whatever they find. That always ends up including larger budgets and fewer constraints on government power. This applies to nearly any agency; all they have to do is find a way to tie whatever they find to some version of their stated mission that sounds roughly plausible. (It’s the bizarro-world version of the ingenuity with which people pursue their self-interest in the market, only on an institutional scale, and consent doesn’t factor into it.)

Kaufman’s case illustrates the mechanism by which this self-interest can trump whatever else might be said to motivate any agency’s actions; it also illustrates how much more reliable this pursuit tends to be than the one involving bombers on the lam. After all, if a committee report on juvenile delinquency and handgun crime — neither of which were involved in Kaufman’s case — can find a way to work in Kaufman, imagine what some enterprising bureaucrat, spy, or congressional staffer could do with a database full of emails, tweets, status updates, and texts.

Now, back to the story.

The Movement in Amerika

The basic outlines of the case are as follows: In July 1971, Kaufman planted nine bombs in various prominent banks in San Francisco, Chicago, and New York. In August, he enlisted in the Army under the name James Edward Jensen. The following January, he went AWOL and mailed handwritten notes to news organizations across the land, identifying himself only as part of “The Movement in Amerika.” From page 3 of his note (punctuation and spelling his):

Kidnapping people and demanding property (or money) in exchange for their lives exemplifies the anti-Life property value of our sick and brutal society. The Movement in Amerika would do better to kidnap property and offer it in exchange for the freedom of our people.

By all accounts, he was disappointed with the violent antics of the anti-war movement, and this was his answer: Don’t hurt anybody on purpose, just threaten to destroy their stuff unless they do what he says. By “our people” in the note, he meant fellow travelers of the bomb-throwing Left, like George Jackson (a Marxist and member of the Black Panthers who was shot to death in an escape attempt from San Quentin) and Sam Melville (convicted of eight 1969 bombings in Manhattan, shot to death during the Attica prison riots of 1971).

By the time he mailed the letters, he’d already been a wanted man for four months, though nobody really knew it. On September 7, 1971, around midnight, one of his bombs accidentally detonated in a Bank of America safe deposit box in San Francisco. The San Francisco Chronicle reported that the bomb destroyed four other boxes and would have killed anyone in the room at the time.

The FBI quickly obtained fingerprints, which went nowhere, despite Kaufman having two sets on file with the Army (he had enlisted before under his real name). Even so, within a couple of weeks, they’d traced the name on his safe deposit box rental form to a Chicago lease. It took two years, however, for them to connect this to a change-of-address form containing his real name.

In December 1971, Kaufman obtained a passport using documents furnished by the Army. The FBI had kept the news of his September bombing quiet, but when Kaufman mailed his letters to newspapers and TV stations across the country, the cat was out of the bag. He was indicted within a week, yet the FBI still did not have their man. As they searched, he was settling into life as Thomas Roy Gifford, a maintenance man at a Los Angeles-area convalescent home. Things then got very quiet for Kaufman/Gifford and stayed that way for more than a decade.

The Other Dr. Kaufman

In the world of budget-wrangling, however, he became a legend. The FBI’s indictment did little to bring Kaufman to justice, but it worked well as a feather in the cap of the attorney general’s annual report:

The primary thrust of the Section’s efforts has been to prosecute revolutionary terrorists for bombing activities. Prominent among these prosecutions are the indictments against Ronald Kaufman in San Francisco, Chicago, and New York.

The same text was cut and pasted — perhaps literally — into several other reports over the next several years. Some used a slight variation.

Kaufman’s fraudulently obtained passport also earned him some mentions. In September 1972, the director of the state department passport office testified that Dr. Kaufman, as well as Timothy Leary, had fraudulently obtained birth certificates and used them to get passports and other identification. Of course, the thrust of the argument was that the department needed more money to combat this sort of thing.

Kaufman’s fraudulent passport, however, was issued during his fraudulent Army enlistment, and he had one in his real name, too. The Army supplied him with a military ID card and assorted other documents. He was a soldier on his way to Germany and, unlike Leary’s escape from prison and flight to Algeria — all arranged by the Weathermen — Kaufman’s was not a case of some underground group faking identification for him. Passports remained almost laughably easy to obtain for decades after the fact. Even so, the FBI already had all the information necessary to find him — including a program to photograph mail sent to and by a suspect. It’s not all that different from the current USPS program, which creates images of all mail at every point of transit.

Kaufman appeared time and time again in Department of Justice budget documents as well. At a 1975 Congressional hearing, he was blessed with a middle name, “Stanley.” The next year marked his guest appearance in the report on juveniles and handguns. He also gained two months on the duration of his bombs in a report of the Task Force on Disorders and Terrorism, but he lost his middle name.

He seemed to become part of the “boilerplate” for anybody in government who needed a scary bomber.

Guilty as Hell, Free as a Bird

In spite of using false names at every turn — for housing, an Army enlistment, and to rent safe deposit boxes in New York City, Chicago, and San Francisco — Kaufman was identified and indicted in short order after his letters were received by the media. Nine of the many charges were for failing to pay taxes on the explosive devices he built.

However, with two full sets of fingerprints from the U.S. Army, fingerprints all over his bombs and bank documents, and a multibillion dollar FBI fingerprint program, his fingerprints did not help catch him at all. Yes, they helped with the January 1972 indictment, but they could have indicted a ghost with the same effect. He was not in custody.

It turns out his marriage finally did him in. In 1986, an L.A. cop married to a friend of Kaufman’s wife recognized the man he knew as Thomas Roy Gifford from his updated wanted poster in the FBI Law Enforcement Bulletin. Wanted posters for Kaufman had been out since 1972; they were updated in 1982. They included his real Social Security number as well as four other Social Security numbers and aliases that he had used.

Kaufman was in jail from 1987 until April 16, 1991. He has a federal inmate register number, yet his legend still lives on: A text file on an Army-sponsored research site, titled 19-Apr-2010 11:52 – EXPLOSIVE INCInENT (sic) INVESTIGATIONS is almost word-for-word what was reported in the previous report from 1975. It even gave back Kaufman’s made-up middle name. What Kaufman was doing in a 2010 report is anybody’s guess. Maybe he should email someone — anyone, really — so the NSA can set the record straight.

The Mother of All Hacks