Yesterday we presented evidence that interest rates have trended lower for the better part of 500 years.

We also suggested that the high interest rates of the mid-to-late 20th century may be history’s true aberration.

Real interest rates, we should mention, are nominal rates minus inflation.

As Harvard economics professor Paul Schmelzing noted in yesterday’s reckoning, “Real rates have been following a downward path for close to 500 years on a variety of measures.”

But we’ve dug even deeper into the historical data… rooted around for omens… and emerged with disturbing findings.

These cycles feature a secular decline of real interest rates… followed by reversals.

These cycles often pivoted around such events as the Black Death of the mid-14th century… the Thirty Years’ War of the 17th century… World War II. 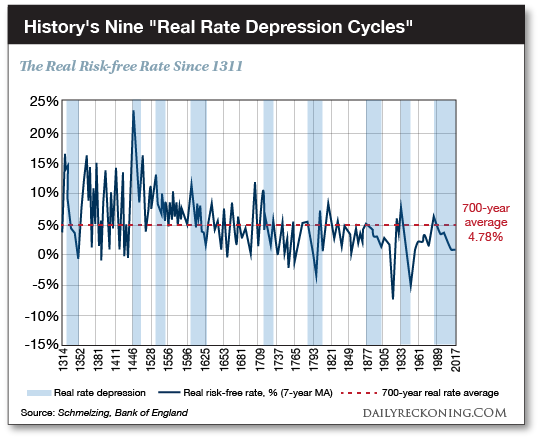 The world is currently immersed in history’s ninth rate depression cycle, which began in the mid-’80s.

Schmelzing says the closest historical analogy to the present cycle is the worldwide “Long Depression” of the 1880s and ’90s.

Schmelzing’s research reveals that the present cycle is the second longest of the entire 700-year record… and the second most intense.

The only cycle to have lasted longer came in the 15th century.

Only one previous cycle — also from the same epoch — exceeded the current cycle in intensity.

By almost any measure… today’s rate depression cycle is a thing of historic grandeur.

The steep downward slope on the extreme right of the chart gives the flavor of its severity: 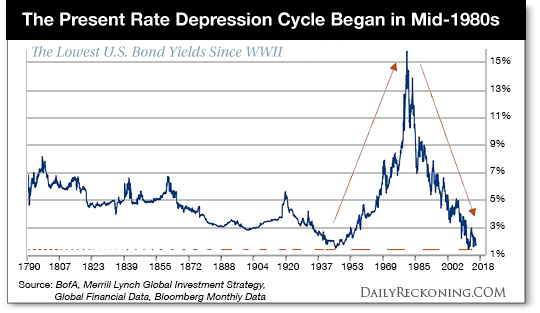 Schmelzing’s researches show that the real rate for the entire 700-year history is 4.78%.

And so “relative to both historical benchmarks,” says this Schmelzing fellow, “the current market environment thus remains severely depressed.”

That is, real rates are well below historical norms.

And if the term “reversion to the mean” has any currency… things could get rather interesting… rather quickly.

Because history shows that when rates do regain their bounce, they do so with malice.

If the world is near the end of the current 34-year rate depression cycle, it could be in for a nasty lesson in mean reversion.

How rapid? How nonlinear?

The current cycle is after all, the second longest on record… and the second most intense.

Since the stock market and economic “recovery” seem to hinge upon ultra-low interest rates, we shudder to think of what a “rapid, nonlinear” rate reversal would mean for either.

Its impact on America’s ability to finance its debt is another story altogether… but a story for a different day.

The cycle could run years yet.

Or it could end tomorrow.

But end it will…

Below, Jim Rickards shows you why gold should perform well, even if interest rates do rise. He also shows you another compelling reason why gold could be on a major upswing. Read on.