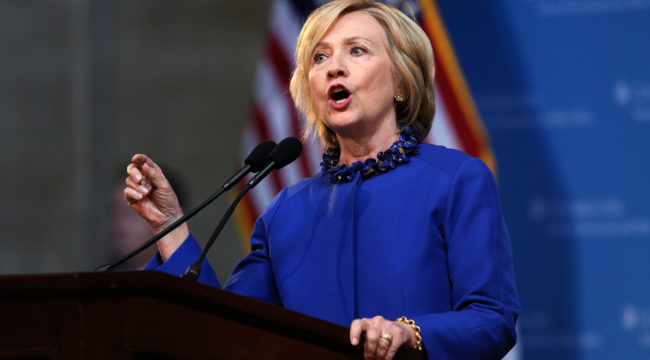 Hillary's Just The Beginning Of Crooked

If Hillary survives WikiLeaks and stumbles across the line ahead of Donald Trump next week, she won’t be the only crooked thing afflicting the nation during the next four years. The crooked stock market is fixing to deliver some punishing blows, too.

That’s because the stock averages are now floating precariously in the nosebleed section of historical valuation, waiting for an unexpected shock to send them spiraling downward. Indeed, I believe the market could drop 40% or more from current levels, and that it could happen in a sudden violent plunge. That’s a reflection of just how absurdly overvalued the stock market has become under the Fed’s mutant regime of bubble finance.

The S&P 500 closed yesterday at 2,111, about 50 points lower than where it stood approximately 90 days ago after the post-Brexit dead cat bounce.

Still, Wall Street prefers to believe that once this short-term election-centered uncertainty fades, the long awaited outbreak of “escape velocity” is still just around the corner, and that when it finally materializes it will fuel a sharp reacceleration of earnings growth.

But that’s an exercise in eyes-wide-shut optimism. There is no basis whatsoever for it in current trends or any plausible scenario for the next year or two.

The starting point is the inertial forces already in play, which are all in the wrong direction. Back in September 2014, for example, reported earnings came in at $106 per share. Well, Goldman Sachs has now reverted its projections for the year downward from $110 per share to $105. They also dropped their 2017 target to $116 from $123.

So reported earnings aren’t inspiring much confidence. But there is hardly a stock research analyst or strategist on Wall Street who makes allowance for even the possibility of a soft-patch — like the 1.3% average growth in real GDP that we’ve actually had for the past four quarters running — let alone an outright recession.

So you’d think they are smoking something down in the canyons of Wall Street!

In fact, they are. It amounts to the delusionary perception that the machinery of the bailout state is still in good working order, and that even if the economy should stumble, Washington will be at the ready with emergency fire hose in hand.

Stated differently, the apparent complacency about recession risk on Wall Street is rooted in the view that recessions are short-lived and Washington has your back with whatever stimulus it takes to reflate the economy and financial markets. So the real smart thing to do is look through any transient business cycle fluctuations and base valuations on the long run.

I think that assumption is profoundly wrong, and may well constitute the true black swan of the coming financial bust. That is say, the market is blithely expecting another reflation party in the event of a rough patch.

After all, for three times during the last 25-years, speculators have been massively rewarded for buying busted stocks, junk bonds and real estate loans or related options and derivatives at the bottom of the cycle.

It happened in 1991 when speculators scooped-up hundreds of billions of financial debris from the busted S&Ls for cents on the dollar. And that became the prototype for similar bottom fishing expeditions after the crashes of 2000-2001 and 2008-2009.

Indeed, while the idea of the “Big Short” has been popularized by the spectacular returns earned by a few intrepid traders who saw the sub-prime securitization fiasco coming in 2006 and 2007, the multi-billion winnings of  Michael Burry, Steve Eisman, Gregg Lippmann and John Paulson were actually small potatoes compared to the windfalls captured by the Big Longs during the last three cycles.

What will be very different this time is that there will be no quick Washington-driven artificial reflation of the financial markets. The early birds are going to choke on the false lures, not feast on the bottom crawlers…

Even as the FBI’s probe of Huma/Weiner’s laptop was happening behind the scenes during the last several weeks, an even more important eruption was quietly gathering steam in the world’s bond markets. The casino gamblers who have made a killing front-running the central banks have begun to fade the trade.

That’s a financial Rubicon. It marks the beginning of the end of central bank omnipotence. It also coincides with the other vector of market-threatening development — the post-election paralysis of Imperial Washington and it’s incapacity this time around to bail out Wall Street when the next black swan arrives.

Indeed, the catalyst for the next stock market crash will surely, and ironically, be the fracturing of the world’s monumental bond bubble. It was the massive and sustained repression of sovereign bond rates by QE-addicted central banks that set off the stampede for yield and return among fund managers.

That the Fed is out of dry powder and marooned on the zero bound is evident enough. But maybe the real black swan shock is going to arrive on the fiscal front…

You can’t find hardly a single pop-up portfolio manager on bubble vision these days who does not expect a “hand-off” from the Fed to a giant infrastructure and fiscal stimulus package early in the next administration. That new outpouring of Keynesian goodness, in turn, is projected to restart the lagging wheels of corporate CapEx and revive animal spirits in the C-suites.

I have a newsflash. The Imperial City will soon descend into dysfunction and paralysis like never before. When the current Presidential campaign reaches the bottom of the gutter, America will be virtually ungovernable. So when the next financial crisis comes along, Washington’s response will be the very opposite of the panicked “stick save”  which happened in September-October 2008.

Right now there are two crucial features to keep in mind. The first is that Donald Trump is quickly proving himself to be the most spectacular unguided missile ever to hit American politics. He’s run such a scorched earth campaign that even if Hillary wins, she’ll be bruised, battered, blooded and delegitimized in the eyes of a huge slice of the electorate.

At the same time, Speaker Paul Ryan has moved swiftly to disavow the GOP standard bearer and save the House Republican majority. He is rather certain to be successful in that endeavor because the overwhelming share of House elections are not won based on today’s voter sentiments — especially among the so-called battleground constituencies — but on yesterday’s state house gerrymanders.

So if Hillary wins, she’ll go to the Oval Office in a giant cloud of disrepute and with no mandate whatsoever; and a GOP majority back to Capitol Hill bent on endless investigations, complete legislative obstruction and ready for an Impeachment trial at the earliest excuse.

So there will be no Wall Street bailouts coming out of the Imperial City’s killing fields. That much is real certain.

P.S. The election’s just six days away. So I really want to get my message out there as loudly and as widely as I can.

As I said yesterday and the day before, Trumped! A Nation on the Brink of Ruin… And How to Bring It Back wasn’t a book I intended to write. But I had to. Let me repeat: America faces impending dangers that every voter should know about before the presidential election just six days from today.

Whether you love or hate Donald Trump or Hillary Clinton, every American deserves to know the truth about the imminent dangers facing their wealth.

That’s why I’m holding a FREE copy of my new book in your name. If you haven’t gotten yours yet, I just need your permission (and a valid U.S. postal address) to drop it in the mail.

This special edition has important material not available anywhere else in the world. Not online through Amazon. And not in any brick-and-mortar bookstore.

Click here to fill out your address and contact info. The book will arrive at your doorstep in just a week or two. And please share it with friends and family. It’s that important. Thanks for reading.