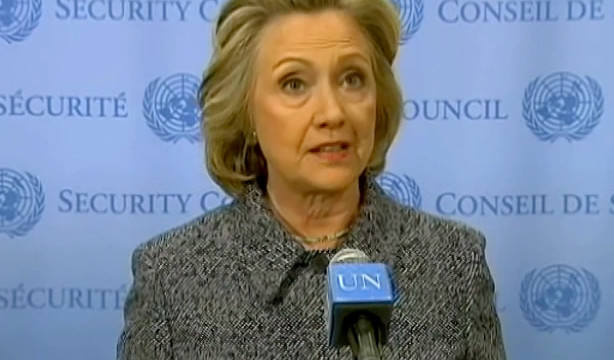 Why the Deep State Is Dumping Hillary

Are you open to a somewhat unconventional perspective on this election? If so, read on. If you’re absolutely confident you know all there is to know about this election (good vs evil, Democrat vs. Republican, etc.), well then let’s compare notes in five years and see which context provided more insight into the future.

In the context presented here, the personalities of the two candidates matter less than their perceived role in the changing of the Imperial Order.

Let’s start with a quick overview of the relationships between each political party and the Deep State–the unelected power centers of the central government that continue on regardless of which person or party is in elected office.

Liberal Democrats have always been uneasy bedfellows with the Deep State.

Republican President Eisenhower had the political and military gravitas to put limits on the Military-Industrial wing of the Deep State, so much so that Democratic candidate John F. Kennedy claimed the U.S. had fallen behind the U.S.S.R. militarily in the 1960 presidential election (the infamous “missile gap”).

Kennedy entered office as a foreign policy hawk who was going to out-hawk the cautious Republicans. A brush with C.I.A. cowboys (the failed Bay of Pigs invasion of Cuba) and a taste of Imperial meddling in distant, poorly understood lands (Vietnam) increased his interest in peace and reduced his enthusiasm for foreign adventurism.

Lyndon Johnson, perhaps the most activist liberal Democrat of the era, was not about to be out-hawked by the Republicans, and so he followed an expansive Imperial agenda into the 10-year quagmire of Vietnam.

Liberal Democrats could find no easy political ground between the pressure to out-hawk the Republicans and the demands of an expansive Cold War Deep State. Both liberal Democratic presidents between 1965 and 1980, Johnson and Jimmy Carter, were one-term presidents, undermined by military/foreign entanglements.

The disastrous defeat in Vietnam of expansive Imperial ambitions (nation-building, etc.) led to an era of retrenchment and consolidation. Other than “splendid little wars” in Grenada and Panama and supporting proxies such as the Contras, the 1980s were years not of Imperial expansion but of Cold war diplomacy.

Republican President Reagan was also given a free hand to be a peacemaker, overseeing the fatal erosion of the U.S.S.R. and the end of the long, costly Cold War. President Bush Senior was a cautious Cold War leader, careful not to alienate the post-U.S.S.R. Russians and wary of over-reach and quagmires even in the new Unipolar world of unrivaled U.S. power.

The era’s one hot war, Desert Storm, restored the sovereignty of Kuwait but left Saddam Hussein in control of Iraq. Bush and his inner circle (and the Deep State they represented) were mindful of the lessons of Vietnam: Imperial over-reach led to costly, drawn-out failures of nation-building in the name of exporting democracy.

Though it was poorly understood by the public, Desert Storm played to American military strengths: a high-intensity conflict with concentrated forces, maneuver warfare with heavy armor protected by absolute air superiority, aided by proximity to allied bases and aircraft carrier groups.

If you designed a war optimized to American military strengths, it would look much like Desert Storm. No wonder it was one of the most lopsided victories in history.

The end of the Cold War and victory in Iraq left the Republicans without their hawkish agenda and political raison d’etre, and Ross Perot’s third-party movement in 1992 effectively delivered the presidency to Democrat Bill Clinton.

Clinton was blessed with a booming domestic economy and a peace dividend from the end of the Cold war. Though Clinton reportedly hankered for a great crisis he could exploit to burnish his place in the history books, alas none arose, and the 20th century ended with a decided absence of existential threats to the U.S. or even U.S. interests.

The incredible success of Desert Storm and the temptations of Unipolar Power birthed an expansionist, activist Imperial doctrine (neoconservatism) and a Deep State enthusiasm for flexing America’s unrivaled power. What better place to put these doctrines into practice than Iraq, a thorn in the Imperial side since Desert Storm in 1991.

Alas, Bush Junior and his clique of doctrinaire neoconservatives had little grasp of the limits and trade-offs of military tactics and strategies, and they confused the optimization of Desert Storm with universal superiority in any and all conflicts.

But as veterans of Vietnam knew, low-intensity war with diffused, irregular combatants is quite a different situation. Add in the shifting politics of Sunni and Shia, tribal allegiances, failed states and a post-colonial pot of simmering resentments and rivalries, and you get Iraq and Afghanistan, two quagmires that have already exceeded the cost and duration of the Vietnam quagmire.

A decade after the collapse of the U.S.S.R. and 25 years after Vietnam, the Deep State was once again enamored of expansion, hot wars, conquest and nation-building. Fifteen years on, despite endless neocon PR and saber-rattling, the smarter and more adept elements of the Deep State have given up on expansion, hot wars, conquest and nation-building.

Even empires eventually taste the ashes of defeat when expansion and hubris-soaked ambitions lead to over-reach, over-extended military forces, and enemies who are not just undeterred but much stronger than when the over-confident expansion began.

In my view, the current era of U.S. history shares parallels with the Roman era of A.D. 9 and beyond, when a planned expansionist invasion of the Danube region in central Europe led to military defeats and insurgencies that took years of patient warfighting and diplomacy to quell.

Which brings us to Hillary Clinton and Donald Trump.

President Obama, nominally a liberal Democrat, has pursued an extension of the neocon Bush expansionism, with the key difference being Obama has relied more on proxies and drone strikes than on “boots on the ground.” But the quagmires in Iraq and Afghanistan have not only persisted, they have expanded under Obama’s watch into Syria and Libya.

War by drone and proxy is even more tempting than outright invasion, as American casualties are modest and the responsibilities for failure are (it is fervently hoped) easily sidestepped. Alas, fulfilling Imperial ambitions via proxies has its own set of limits and trade-offs; proxy wars only get the desired results in very specific circumstances.

The Democrats have out-hawked the Republicans for eight years, and the Deep State is in disarray. I have been writing about this for several years now. In March 2014, I wrote, for example:

When we speak of the Deep State, this ruling Elite is generally assumed to be monolithic: of one mind, so to speak, unified in worldview, strategy and goals.

In my view, this is an oversimplification of a constantly shifting battleground of paradigms and political power between a number of factions and alliances within the Deep State.

Even the Deep State only rules with the consent of the governed. The wiser elements of the Deep State recall how the Vietnam War split the nation in two and exacerbated social upheaval. These elements recognize America is tired of Imperial expansion, quagmires, proxy wars and doomed nation-building.

This exhaustion with over-reach shares many parallels with 1968 America.

In this long view of Imperial expansion, defeat and retrenchment, Hillary is holding down the status quo fort of failed expansionism and proxy wars. Her ability to out-hawk the Republicans is unquestioned, and that is one of her problems.

When the governed get tired of Imperial over-reach and expansion, they are willing to take chances just to get rid of the expansionist status quo. In this point in history, Hillary Clinton embodies the status quo. The differences in policy between her and the Obama administration are paper-thin: she is the status quo.

The governed are ready for a period of retrenchment, consolidation and diplomatic solutions to unwinnable conflicts, as imperfect as the peace might be to hawks.

For these reasons, the more adept elements of the Deep State have no choice but to dump Hillary. Empires fall not just from defeat in war with external enemies, but from the abandonment of expansionist Imperial burdens by the domestic populace.