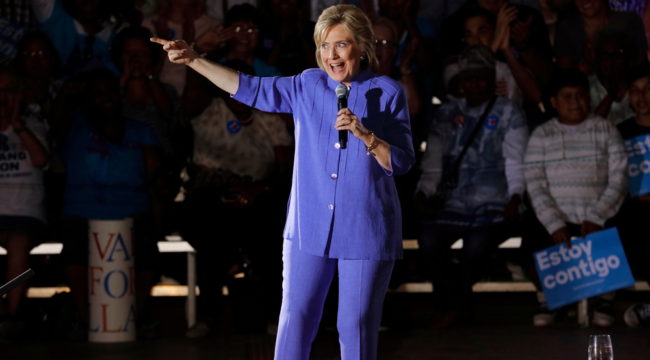 Hillary Clinton: Dictatress of the World

As John Quincy Adams so profoundly observed long ago, America’s security does not require that it search the world for monsters to destroy.

But apparently, Hillary Clinton does. It was Clinton, after all, who as secretary of state, convinced a reluctant Obama to commit the U.S. to the disastrous intervention in Libya. And her secretary of defense-designate is none other than Michèle Flournoy, former undersecretary of defense for policy in the Obama Pentagon. She’s advocated a stronger U.S. role in Syria.

Both share an obliviousness to Adams’ profound truth because they are credentialed members of the “Washington War Party.”

As a team, Clinton and Flournoy are as good a reason as any to give Donald Trump a shot at the commander in chief job.

After all, he has not spent a lifetime in the Imperial City looking for monsters to destroy abroad. He has even had the good sense to suggest that the vast network of U.S. bases used for this purpose be sharply curtailed.

Defend America at home first, he says. And why not? The Washington imperium has failed virtually everywhere, and its bombs, drones and occupations have hatched far more terrorists than they have killed.

Nor is Trump a paid-off stooge of the military-industrial-congressional complex that Eisenhower warned about. It’s done exactly as Ike predicted since the demise of the Soviet Union.

That is, it has never stopped inventing enemies, provocations and threats designed to justify a massive, costly and obsolete Cold War military machine.

The whole military-industrial complex, NATO and international security apparatus should have been disbanded when the Cold War ended, for lack of a genuine industrial-state enemy.

Instead, searching for monsters to destroy has been the very raison d’être of American foreign policy. And it has surely been the source of the endless catastrophes that have ensued.

The fact is terrorism did not suddenly sprout up a few years ago from the teachings of a 1,370-year-old religion. Nor did it come from a belated discovery in struggling Middle Eastern nations that they hate America’s freedom, prosperity and materialistic culture.

No, jihadist style terrorism came to America only after Washington trained and armed the Mujahideen in the 1980s, waged unprovoked war in Arabia and Mesopotamia in the 1990s and fostered the anarchy of failed Middle Eastern states — from Afghanistan to Iraq, Syria, Yemen, Somalia and Libya.

In fact, the American Imperium has been a bloody failure from Vietnam through Central America, Afghanistan, Iraq, Syria and now Libya for the second time, among countless others.

In that context, Donald Trump has the correct impulse — homeland security first, and primarily mounted from these shores.

But Trump has also bought into the rabid anti-terrorism rhetoric of the War Party. He’s been lured into Washington’s utterly false campaign of propaganda and lies about the threat of jihadist terror in the cities and towns of America. That campaign is designed to justify the nation’s unconstitutional $80 billion spy-state apparatus at home and its vast war machine abroad. So the Trump candidacy is in danger of being stealthily co-opted by the ruling elites.

Were Donald Trump to end up shilling for the War Party in a losing race, it would be bad enough. That’s because it would further intensify the public hysteria about terrorism that keeps the American Imperium alive — notwithstanding its blatant and chronic policy failures and its staggering cost.

Needless to say, that would do nothing for flyover America, nor would it help to rejuvenate the nation’s ruined Main Street economy.

In fact, it would lead right into the Ronald Reagan trap. Namely, the shifting of political capital into the pursuit of warfare state fiscal resources and police state legal authorities. That would divert valuable resources from attacking and removing the statist regulatory, fiscal, tax and monetary barriers that stand in the way of renewed American capitalist prosperity.

The Trump campaign is already taking shape in the wrong direction. But a road map back to the true mission that history beckons of it would be just what the country needed.