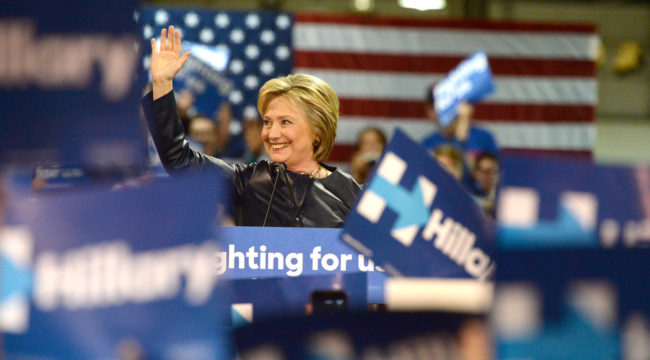 Hillary Clinton has always been at the head of her class. That includes being among the leading edge of the 80-million strong baby boom generation that first started arriving in 1946–47.

She did everything they did: Got out for Barry Goldwater in high school; got upwardly mobile to Wellesley and social liberation during college; got “Clean for Gene” and manned the anti-war barricades in the late 1960s; got to Washington to uplift the world in the 1970s; got down to the pursuit of power and position in the 1980s; joined the ruling class in the 1990s; and has helped make a stupendous mess of things ever since.

The baby boom generation which started with so much promise when it came of age in the 1960s has ended up a colossal failure. It has turned America into a bloody imperial hegemon aboard and a bankrupt Spy State at home where financialization and the 1% thrive, half the population lives off the state and real main street prosperity has virtually disappeared from the land.

Quite a deplorable legacy, that. And all the while Hillary has been our class president. God help the world if she becomes our nation’s President. She has betrayed all that was right about the baby boomers in the 1960s. And has embraced all the wrong they did during their subsequent years in power.

It starts during our defining moment when peace finally had a chance in the spring of 1968. We drove a sitting President from office, and, one whose megalomaniacal will-to-power was terrifying.

We called bull on the cold war hysteria that had once put us under our desks at school and now claimed that peasants in far off rice paddies threatened our security. We stopped the Vietnam War cold, dented the Cold War deep and put the whole Warfare State apparatus on the run — the Pentagon, CIA, the generals and admirals, the military-industrial complex. Within a few years the warfare state budget was down by 40% in constant dollars.

So it was a rare chance to break the deadly cycle of war that had started a half-century earlier in the bloody trenches of northern France during the Great War. Then the vengeful folly of Versailles led to WWII. And finally we had the nightmare of the Cold War.

True enough, the defeat and retreat of the American Imperium by the idealism and defiance of the baby boomers was interrupted by the Reagan defense and Cold War revival. But that historical error is what makes the Clintons all the more culpable…

It was their job as the first baby boom co-Presidents to finish the work of 1968, and by the time they entered the White House it was a lay-up. The Soviet Union was no more and China’s Mr. Deng had just declared that to get rich is glorious.

The Clintons’ job in 1993 was to have at least the vision of Warren G. Harding.

After all, Harding demobilize the U.S. war machine completely, eschewed the imperial pretensions of Woodrow Wilson and actually launched a disarmament movement which resulted in the melting down of the world’s navies and the Kellogg-Briand treaty to outlaw war.

Yet the opportunity at the Cold War’s end was even more compelling. There was absolutely no military threat to American security anywhere in the world. The Clintons could have drastically reduced the defense budget by mothballing much of the navy and air force and demobilizing the army.

They should have cancelled all new weapons programs and dismantled the military-industrial complex. They could have declared “mission accomplished” with respect to NATO and made good on Bush’s pledge to Gorbachev to not expand it “by an inch” by actually disbanding it. And they were positioned to lead a global disarmament movement and to end the arms export trade once and for all.

That was their job — the unfinished business of peace. But they blew it in the name of political opportunism and failure to recognize that the American public was ready to end the century of war, too.

And you can’t let Hillary off the hook on the grounds that she had the health care file and Bill the bombs and planes. On becoming Senator she did not miss a stride betraying the opening for peace that had first broken through in 1968.

She embraced Bush’s “shock and awe” campaign in Iraq and was thereby complicit in destroying the artificial nation created by Sykes-Picot in 1916. So doing, Clinton helped unleash the furies of Islamic sectarian conflict that eventually led to the mayhem and brutality of the Shiite militias and the rise of the ISIS butchers.

Tellingly, Hillary Clinton made a beeline for the Senate Armed Services Committee, the domain of the Jackson war democrats, not the Foreign Affairs Committee, where Frank Church had exposed the folly of Vietnam and the treacherous deeds of the CIA. Undoubtedly, this was to burnish her commander-in-chief credentials, but it spoke volumes.

By the time Hillary got to the seat of power, the idealism and defiance of the warfare state that had animated her and the baby boomers of 1968 had dissipated entirety. For her and most of them, it was now all and only about getting and keeping power. In that respect, Hillary’s term at the State Department was a downright betrayal.

Whether by accident or not, Obama had actually been elected as the “peace candidate” by echoing the rhetoric of 1968 that he had apparently read in a book but had been too young to actually hear. What this untutored and inexperienced idealist needed to hear from his Secretary of State was a way forward for peace and the dismantlement of a war machine that had rained havoc on the world, left behind 4 million damaged and disabled veterans who had sacrificed for no good reason and a multitrillion-dollar war tab that had bloated the national debt.

What he got was Hillary The Hawk.

When Obama took Bush’s already bloated $650 billion war budget (2005$) to a level that was almost 2X the level Eisenhower thought adequate at the peak of the cold war and upon his parting speech warning of the military-industrial complex, Hillary was completely on board.

When Obama was bamboozled into a “surge” of forces in the god forsaken expanse of the Hindu Kush, Hillary busied herself rounding up NATO support.

When her neocon and R2P (responsibility to protect) advisers and Administration compatriots urged making peace by starting wars in Syria, Libya and the Ukraine, Hillary lead the charge. All of them have been disasters for their citizens and a stain on America’s standing in the world.

When the Deep State began lining up the next enemy, Hillary joined the gumming brigade, warning about the China threat. My god, were the red capitalists of Beijing to actually bomb 4,000 Wal-Marts in America their system would collapse in six months and their heads would be hung from the rafters in the nearest empty Foxcon/Apple factory.

Here’s the thing. Hillary Clinton’s sell-out to the Warfare State is not just about war and peace — even as it fosters the former and precludes the latter. It’s also about the nation’s busted fiscal accounts, its languishing main street economy and the runaway gambling den that has taken over Wall Street.

After all this time, however, Hillary doesn’t get any of this. She thinks war is peace; deficits don’t matter; the baby boom is entitled to the social insurance they didn’t earn; and that the Fed’s serial bubble machine is leading the nation back to prosperity.

Actually, it’s leading to the greatest financial bubble in human history. After 90 months of ZIRP and a decade of Wall Street coddling and subsidization by the Fed, the windfalls to the 1% have become unspeakable in their magnitude and illegitimacy.

Soon 10,000 people will own a preponderant share of the wealth; 10 million people will live grandly off the droppings; 150 million will live off the state; and the rest of America will be left high and dry waiting for the house of cards to collapse.

Hillary rose to fame delivering an idealistic commencement address at Wellesley at the beginning of her career. But like the generation she represents, she has betrayed those grand ideals over a lifetime of compromise, expediency, self-promotion and complacent acquisition of power, wealth and fame.

She doesn’t deserve another stint at the podium — let alone the bully pulpit.