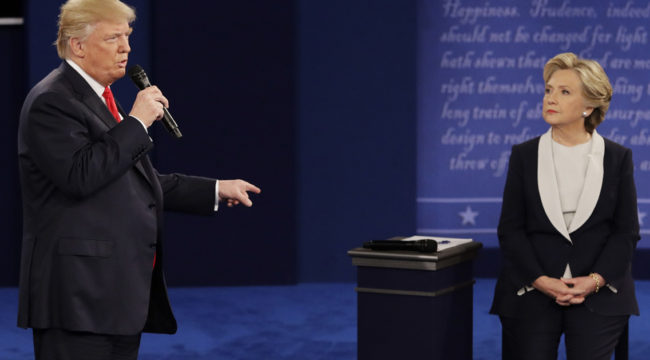 Hillary and Her Harpies

This is starting to sound pretty ominous. The Washington War Party is coming unhinged and appears to be leaving no stone unturned when it comes to provoking Putin’s Russia and numerous others.

The recent collapse of cooperation in Syria — based on the false claim that Assad and his Russian allies are waging genocide in Aleppo — is only the latest example.

So now comes the U.S. Army’s chief of staff, General Mark Milley, doing his best imitation of Curtis LeMay in a recent speech dripping with bellicosity. While America has no industrial state enemy left on the planet that can even remotely challenge its economic might, technological superiority and overwhelming military power, General Milley unloaded a fusillade of bluster at the Association of the United States Army’s annual meeting in Washington DC:

“The strategic resolve of our nation, the United States, is being challenged and our alliances tested in ways that we haven’t faced in many, many decades,” Army Chief of Staff Gen. Mark Milley told the audience.

“I want to be clear to those who wish to do us harm … the United States military — despite all of our challenges, despite our [operational] tempo, despite everything we have been doing — we will stop you and we will beat you harder than you have ever been beaten before. Make no mistake about that.”

That is rank nonsense. We are not being “tested” by anyone. To the contrary, Imperial Washington is provoking tensions and confrontations everywhere —from the South China Sea to Syria, Iraq, Yemen, Libya, the Black Sea, the Baltics and Ukraine — that have no bearing whatsoever on the safety and security of the citizens of Spokane WA, Topeka KS and Springfield MA.

Indeed, the clear and present danger to peace and freedom in the homeland lies not in the machinations of foreign capitals, but in the arrogant and bombastic groupthink that has overtaken the denizens of the Imperial City.

The latter is again on display in the full-throated fulminations about the siege of Aleppo being emitted by the Washington War Party and its trained poodles in the establishment media — most especially the New York Times.

We are told that the Russian Air Force and Assad’s military are targeting schools, hospitals and the 200,000 or so civilians of Eastern Aleppo for indiscriminate bombing and slaughter. It’s shades of Benghazi 2011 all over again — an incipient genocide that Washington must stop in the name of R2P (Responsibility to Protect).

What is happening in Aleppo is a raging sectarian civil war and a proxy battleground for the regional political maneuvers of Turkey, Saudi Arabia and Iran. They are none of America’s business and haven’t been since the so-called Arab spring uprising spread to Syria in 2011.

We name names in this context for a reason. A nation of 22 million back in 2011, which had been reasonably stable in modern times under the authoritarian but secular rule of the Assad family, does not suddenly give rise to a human tsunami of 5 million refugees spilling all over the Mediterranean and Europe and to the reduction of virtually every one of its ancient cities and towns to rubble and rivers of blood on its own volition.

To the contrary, all of this mayhem was instigated by the War Party’s armchair warriors and the “indispensable” nation hegemonists in Washington. Literally billions in aid, weapons, munitions, training and logistics have flowed into Syria from all directions on the outside. And all of it was either financed by American taxpayers or by regional powers which have been armed and greenlighted by Washington.

The fact is, the Assad regime in Syria was from the same mold as the regime of Saddam Hussein in Iraq. Both arose out of military coups in the post-war period and espoused a secularist Arab nationalism. The aim was to stimulate economic progress and a renaissance of Arab culture under the leadership of a strong state and prodigious public sector, which in practice meant rule by economic bribery and heavy-handed police-state repression of dissent.

Still, it was the antithesis of jihadism and the religious fanaticism represented by the Wahhabism exported from Saudi Arabia, the various off-shoots of al-Qaeda and now the murderous caliphate established by ISIS in the Sunni lands of western Iraq and the Euphrates Valley of Syria.

The Assad regime in Syria, in fact, was the guardian of religious pluralism. The Assad family was from the minority Alawite branch of Shiite Islam, which was heavily concentrated in the northwest coastal provinces. Its coming to power broke a centuries old dominance of the majority Sunni population and was therefore welcomed by other minorities including Christians, Druze, Jews, Kurds, and countless more.

There is no denying that the rule of the Assad regime was harsh, but it was also absolutely par for the course among middle eastern governments before or since.

Of course, Saudi Arabia is the worst of all. You can be beheaded there for apostasy, infidelity, drug possession or insulting the king. Last year they chopped nearly 200 heads — even as the War Party claims Riyadh as an indispensable ally in the battle against the far less prodigious head-choppers of the Islamic State.

So when the uprising began in Syria during 2011 there was no reason for Washington to take sides — any more than there was in Libya. But in both cases false propaganda about allegedly imminent massacres of civilians by the incumbent regimes was deftly conveyed to the establishment media — especially CNN — by the various War Party think tanks and official agencies.

The subsequent slide down the slippery slope of regime destruction did not take long. Thanks to Hillary’s harpies of war, the White House’s bombing campaign resulted in the butchering of Khadafy within the year, and Libya’s descent into the anarchy of rule by warlords and jihadist killers that has metastasized since then.

And that brings us back to Syria and Aleppo. Whatever the merits of the original peaceful protests against the Assad government in the spring of 2011, the movement turned violent and quickly descended into civil war only because of the flow of fighters, arms and agitators from outside of Syria.

The first of these was the so-called Free Syrian Army (FSA), but that was a creation of Turkey and the Washington regime change advocates who wanted Assad gone. Erdogan wished to eliminate Assad because he was unwilling to suppress the large Kurdish population on Turkey’s border, while Washington’s motivation was no less untoward.

It’s beef against Assad had nothing to do with humanitarian considerations, but, instead, was all about Washington’s fatwa against Iran. The latter was allied with the Assad government based on the confessional politics of the Shia/Sunni divide, but when it comes to Washington’s imperial writ, the sovereign state of Syria was not entitled to a foreign policy and alliances of its own choosing.

Accordingly, Turkey provided sanctuaries for the FSA inside its borders, allowed fighters and arms to move freely to the FSA training camps and staging areas and provided safe transit of soldiers and supplies across its borders into Syria. In fact, after the Libyan regime fell, the CIA opened up Khadafy’s arsenals and transshipped weapons to Turkey through what was called the “ratline”. That’s what we going on in the CIA annex in Benghazi when Ambassador Stevens was killed.

Needless to say, the Assad regime reacted brutally to this militarized attack on its very existence, and thereby begat the “humanitarian crisis” which is the inexorable result of civil war prosecuted with modern weaponry in dense urban areas. So without missing a beat, the liberal interventionist faction of the Obama White House was also soon beating the war drums on R2P grounds.

Meanwhile, the so-called “moderate” FSA fighters armed and enabled by Turkey were allied with the Moslem Brotherhood.

Moreover, still other so-called rebel factions have been recruited, trained and armed by the CIA in camps based in Jordan. For the most part these fighters, when they eventually get to the battlefronts in Syria, have tended to sell or abandon their weapons, disappear across the Turkish border or defect to the Nusra Front and even ISIS.

Last summer, in fact, the 55 fighters recruited and vetted under a $500 million Congressional authorization were gone within weeks. Their commander and his deputy was captured during their first day on the battlefield, a dozen or so were killed and the rest defected. Worse still, within days jihadist fighters showed up on propaganda videos brandishing their brand new American weapons.

Is it any wonder that Syria has become hell on earth? Or that what remains of Eastern Aleppo is crawling with Jihadist radicals aligned with Nusra Front? Or that they have attempted to use the 200,000 or so remaining civilians as human shields?

The whole thing is madness. Yet at this very moment Washington is risking a military clash with Russia owing to the breakdown of the truce in Aleppo, and a renewed campaign to establish a no fly zone in the immediate area.

Really? The U.S. Air Force is going to shootdown Russian bombers to protect civilians in a small part of what is left of Aleppo who are being used as human shields by affiliates of the Muslim Brotherhood and al-Qaeda?