We were a bit surprised by what came next…“[but] all good things must come to an end” he said, “this winning streak is no different.” As a chartist and market timer, Greg has always donned rosier glasses than us… except, of course, when it comes to gold.

It is true. The end of April marked six straight months of higher and higher monthly closes, something not seen since the market bottomed out in 2009. Since that bounce back three years ago, the S&P has risen 131%… It looks like we have nowhere to go but up. 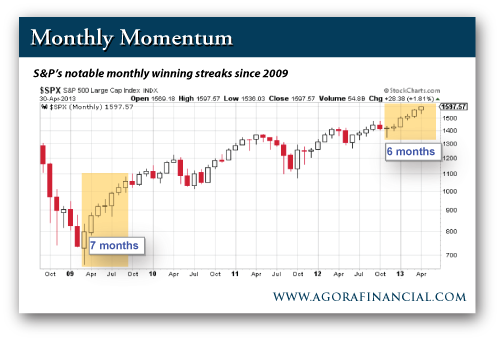 In fact, the stock market seems to be one of the very few rays of bright light amongst other stagnant or dismal economic news… That is if you listen to pundits and luminaries on CNBC and beyond.

Alas, the stock market is not the economy. Neither does the “wealth effect” lift all boats as it turns out.

You may recall back in 2009 the bottom and bounce back coincided with the Fed’s first round of so-called quantitative easing (QE). Investors cheered… hit the bid… and the S&P regained almost half of its losses.

Fast forward almost 8 months, and the same thing happened. Mr. Bernanke swooped in with “QE2” and propped up the S&P’s upward momentum.

And what happened when the Fed spigot twisted shut? The market tumbled. 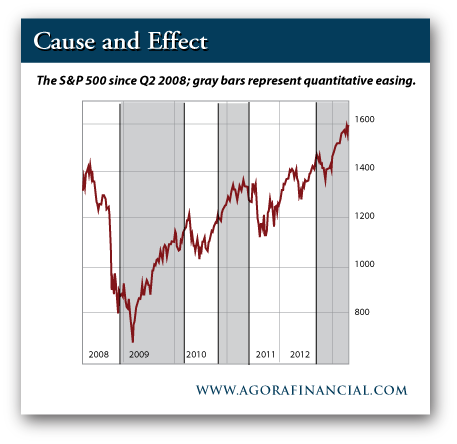 The affectionately titled “QE Infinity” began anew in September, 2012. Since then, the central bank has added more than half a trillion in assets to its balance sheet — $360 billion in treasuries and $320 billion in mortgage backed securities

The result: The S&P increased 30% in 8 months and perhaps introduced a false sense of prosperity.

We alluded yesterday to the present day absence of the once discontented Tea Party and Occupy protests. For now it seems that the Fed has pulled one over on them. Funny how a little more Everclear in the punch bowl encourages the partiers to linger…

(Here’s the part in the story where we get to play the role of the bad boy in the corner, mocking, even if only to disguise our own flaws.)

“Whom does an absolutely unrestrained Federal Reserve System with a limitless credit card benefit?” Lewis Lehrman asked last week during our candid interview on film.

“First,” Lehrman answers with a follow up question, “it benefits the big spenders in Congress, because when Congress spends 40 percent more than they take in with tax revenues, who finances the difference?”

Now, if the new money issued by the Federal Reserve System against the purchase of U.S. Treasury debt goes into the market, whom does it go to first? It goes to the bankers and the bankers’ clients, and who is that? Generally the speculator class on Wall Street, who can then borrow at these subsidized interest rates, closer to 0 or 1 percent, unlike the common man in the street who has to pay 12, 15 and 20 percent, and as a result, it leads to what is called the carry trade.

The speculators — or, if you wish, the investors — on Wall Street or on Lombard Street in London, they borrow money at 1%, and they believe that the policies of the central banks are going to lead to a rise in commodity prices. It’s going to lead to a rise in the prices of bonds, so they front run the Fed. If the Fed’s buying bonds, I’m going to get out there in front, borrow the money from them and buy the bonds that they’re going to repurchase, and I’m going to make a very quick, easy, speculative profit, and that is what’s been going on since 2009.

It’s not a new thing. It’s been going on since the Federal Reserve was established, and more so after 1971 after the suspension of convertibility, but it is more intensified, by an order of magnitude, than it was in the early, money creating days of the Federal Reserve.

As we observed yesterday, ultimately it’s the middle class who pays the price. Or what they can afford of it any longer.