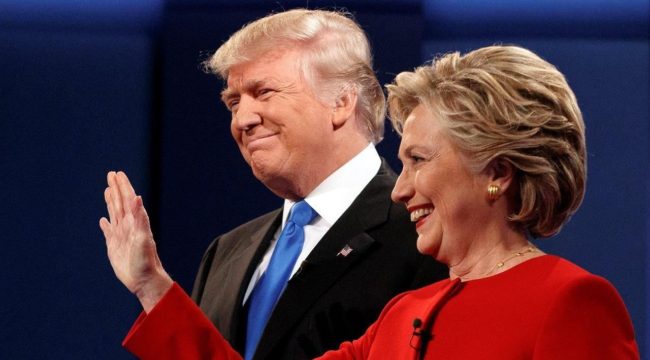 The most bizarre presidential election ever delivered yet again last night…

Two of the most disliked candidates in history had the debate equivalent of a UFC no-holds-barred match.

Clinton sensed Trump’s campaign was on the ropes and seized on his crude videotaped comments about women to declare him unfit for office.

Trump punched back with an attack on Bill Clinton’s past predations against women… and even brought some of Slick Willie’s victims to the event to watch the festivities.

Donald said he would put Hillary in jail.

All that was missing was the steel cage surrounding the combatants.

And there was no tap out.

Let me boil down this presidential election for you. It’s much simpler than what’s being portrayed in the media…

Hillary’s basic argument is that America is doing just fine. We just need to massage the edges a bit with massive new government programs and everything will be even better. Stay the course. Trust the system, lick the boot and genuflect at power.

Trump’s message is that the country and the world are on a path to disaster. We’re about to go off a cliff. Be afraid. Be very afraid. Get “bomb shelter in the backyard” afraid.

Depending on your worldview, you’re going to hold your nose and vote for the deeply flawed candidate who’s more in line with your view of the current state of affairs.

If you’re being shafted by the status quo, you’re hoping Trump burns the stinking, rotten edifice of the current system to the ground.

If you’re benefitting from the status quo, you think Trump is the next Hitler to be stopped at all costs. And that’s exactly what the Deep State is trying to do…

It’s About to Get Really Ugly

Look, Trump is an obnoxious, crude and lewd messenger. And while tens of millions of voters don’t personally endorse him, they’re still ravenous for his straight-talk message.

Last night, he threw them big chunks of red meat with the blood still dripping…

He railed against the globalist position on trade…

He took shots at the mainstream media…

He highlighted our ludicrously costly and disastrous wars around the world…

And don’t forget, at the last debate he called the Federal Reserve corrupt.

Every one of those positions is a direct assault on the main pillars of the Deep State… and their globalist figurehead, Hillary Clinton.

And what’s truly amazing is that his unfiltered charges of systematic corruption were broadcast to the entire world. That’s never happened before. That’s why I think Trump was the winner last night.

But the Deep State (which includes Republicans by the boatload) won’t take these brazen attacks lightly. Trump is a threat to its power, finances and organizational stability.

That’s why they ramped up their counterattack on Trump with NBC’s videotape release of his 11-year-old vulgar comments about women weeks before the election. They did it for maximum impact.

And that’s just the beginning…

Love him or hate him, Trump is an existential threat to the Deep State’s existing new world order. That means there are more of his damaging secrets sure to be revealed. The Deep State is going to throw the kitchen sink at him.

And that is where my interest lies: What comes next?

Look, social media has changed the calculus. If not for DNC hanky-panky, it would have been Trump vs. Sanders—two consummate outsiders firing straight at the establishment.

I for one sincerely hope Trump and Sanders are just the start of outsider America.

To paraphrase Ayn Rand, when Deep State government is free to do anything it pleases, when citizens may act only by permission, the stage of brute force rule is near.