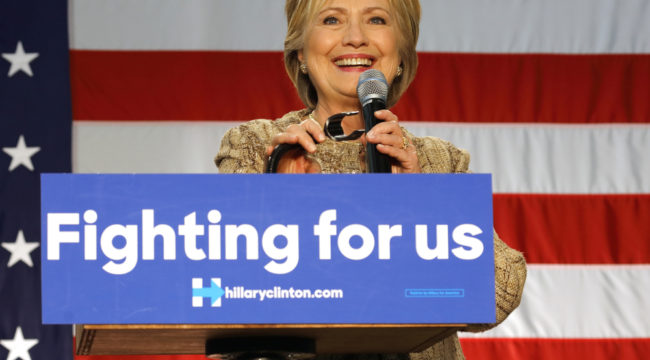 Here’s What Happens If Hillary Wins…

At an event in Davos, Switzerland on Friday, Larry Summers gave you a glimpse of how regressive a Hillary Clinton presidency will be…

Regular readers are familiar with Summers…

He’s the former Treasury Secretary and Clinton crony who’s first in line to return to his former post at Treasury if Hillary is anointed on Tuesday.

The last time we caught up with Summers he was mindlessly proposing that the government should buy stocks to artificially boost the stock market and economy.

Not content with the government taking ownership over large swaths of the stock market, Summers is now taking his “government as the supreme father” fantasies one step further…

Have Faith in Government

Summers’ next big idea is that central banks such as the Federal Reserve should no longer be independent from national governments.

In his perverted worldview, central bankers should work hand-in-hand with politicians to engineer monetary policy.

Let that sink in for a moment…

The strongest argument for an independent Federal Reserve is based on the principle that subjecting the Fed to direct political influence would lead to a lethal inflationary bias in monetary policy.

And it’s easy to see why…

Weasel politicians are driven by their short-term need to win the next election.

That means critical long-term monetary objectives, like stable price levels, would be immediately tossed out the window for the sake of political self-interest.

Look, does anyone really believe that a Federal Reserve under the direct control of the President or one political party in power wouldn’t leave rates low to juice the stock market and economy in an election year?

Shoot, left-wing Fed chair Janet Yellen arguably made that happen this year when the Fed is supposedly independent.

Plus, putting the Fed under political control means that it can be misused to facilitate Treasury financing of massive budget deficits by its purchases of Treasury bonds.

So why does Summers think this will work now?

With a straight face, he argues that Fed independence was required in the 1970s and 1980s because back then the White House and Congress could not be trusted to fight inflation.

Apparently today, politicians are so much more trustworthy and responsible. (Cough.)

Does he really think he can sell this drivel to the masses? “Yes” is the short answer.

Look, the idea that Fed has complete independence from the federal government as of right now is completely absurd.

The Fed Board is appointed by the President. The Fed chair must periodically report to Congress. The Fed is subject to political pressures already.

But thankfully, the President nor Congress has any direct involvement with or veto power over interest rate decisions.

So why would anyone propose granting politicians more power to wreak havoc on the U.S. economy?

Well, it makes perfect sense to central planners like Clinton and Summers. These people have one clear objective: amass huge personal fortunes. Consolidation of power gets them richer quicker.

The more power they control… the richer they become.

Because after all, this no longer has anything to do with what is good for the people. Wikileaks has laid bare their real motivations.

They will control more levers of power and their dominance will grow even stronger.

It’s a win/win for them, lose/lose for you—even if you don’t know it yet.

So through government trading the stock market with your tax dollars and by Clinton manipulating monetary policy to increase and consolidate her power… these are the policy mandates coming your way with President Clinton Version 2.0.

Enjoy the ride. You can’t stop it.