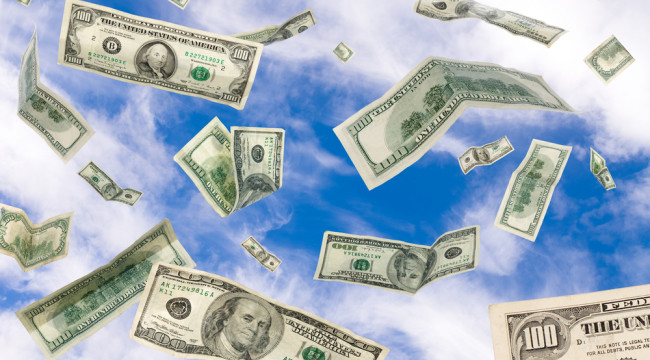 DELRAY BEACH, Florida – The sky in South Florida is gray. A cold wind blows across the sand.…

Since the start of the year, the Dow is down about 7%. But certain stock market sectors have undergone a much harder pruning.

First, energy… then the tech… and now banks.

Shares in too-big-to-fail bank Citigroup are down almost 28% so far this year. And shares in Europe’s biggest bank, Deutsche Bank, are down by more than 36%. (More about the carnage in bank stocks… and what it means… in today’s Market Insight.)

As always, we don’t know where this leads.

But as we warned at the start of the year, it could be the beginning of a serious bear market. And more!

As Nobel Prize-winning economist Paul Samuelson put it, the stock market has famously predicted nine out of the last five recessions.

Further study shows that a stock market plunge of 10% has about a 50% probability of presaging a recession… 100% of the time!

But a stock market plunge not only predicts trouble in the economy; it also causes it.

The Fed’s treasured “wealth effect” – in which investors, seeing the value of their portfolios rise, feel richer and rush out and spend – works in both directions.

When stock prices fall, investors pull back on spending, and the economy goes into a cold funk.

The further stocks fall… the more the likelihood that the economy will follow.

This has the central planners worried.

Pushing on a String

What might central banks do if the next recession hit while interest rates were still far below pre-2008 levels? As a paper from the London-based Resolution Foundation argues, this is highly likely. Central banks need to be prepared for this eventuality.

The most important part of such preparation is to convince the public that they know what to do.

Good luck with that!

The one clear lesson of the last eight years is that central banks either do not know what they are doing… or they know and are intentionally not doing it.

There is no shame in incompetence, especially when it comes to managing the world economy. We don’t believe any human could do it.

So, Yellen et al can hold their heads up. They have failed, but they were on a fool’s errand anyway.

A sharp-eyed reader sent us a quote from the Wall Street Journal. It shows that the mainstream financial press is coming around to our point of view:

The failure of unconventional monetary policy in Japan and Europe is proof that central banks can’t conjure growth in economies that need major reforms to let resources find more productive uses. The old analogy of “pushing on a string” remains valid – if companies can’t find promising investments, credit creation will remain stalled no matter how cheap credit is.

Then there is the comment from governor of the Reserve Bank of India, Raghuram Rajan:

And from Sean Yokota, head of Asia strategy at Nordic bank SEB:

Central bankers are running out of things to do.

Hang On to Your Hat

Not according to Mr. Wolf!

He lays out the options, prefacing them with remark that letting a correction do its work is out of the question “given the damage it would do to the social fabric.”

(He did not specify what damage a cleansing correction would do; in our view, the social fabric could use a good scrubbing, too.)

One option, said Wolf, would be to “change targets,” allowing for higher levels of inflation. He didn’t elaborate, leaving us wondering how a central bank that couldn’t get annual consumer price inflation to 2% would be able to move it to 3%.

Another option would be the “forced conversion of debt into equity,” which he said would be difficult.

Still another option would be more quantitative easing, which might be provocative.

There is also negative-interest-rate policy (NIRP). But “it is unclear how economically effective [it] would be,” he warned.

What policy does Wolf actually recommend? The nuttiest one, naturally:

A final instrument is “helicopter money” – permanent monetary emission for the purpose of promoting purchases of goods and services either by the government or by households.

If the money went directly into additional spending by government or into lower taxes or to people’s bank accounts, it would surely have an effect. The crucial point is to leave control over the quantity to be emitted to central banks as part of their monetary remit.

For the last eight years, we have seen nothing but absurd and unproductive central bank policies.

But hang onto your hat: There are plenty more where those came from!