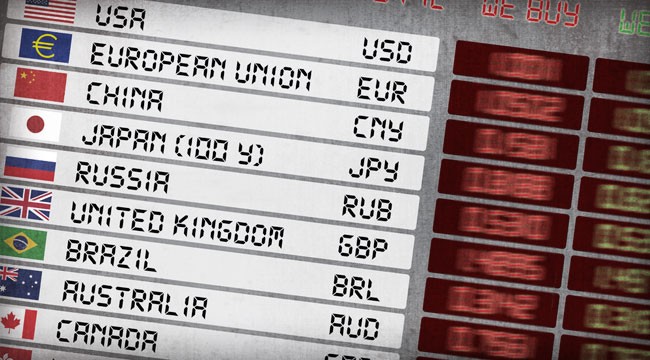 The Dow Jones Industrial Average was down a bit over 100 points last week but that hardly does justice to a week with multiple triple digit swings. Three of the last six trading days have seen a move of at least 1%, a level of volatility that must be unnerving to anyone who thought the last few years were representative of how markets usually work.

Volatility actually started picking up in the middle of last year so this is merely a continuation of that trend. The source of the market’s angst is, of course, the uncertainty regarding future Fed policy fed by conflicting economic data.

Volatility in and of itself isn’t necessarily a bad thing as markets can continue to climb even as volatility does the same. If one takes a quick look back to the late ’90s the VIX (volatility index) trended higher from 1996 right to the end of the dotcom mania.

Obviously, a rising VIX doesn’t have to correspond with a lower stock market but it does make one a bit nervous to recognize that the last time it happened we were in the middle of a stock market mania.

Not that today’s market qualifies as a mania — yet — since one can still find plenty of bears while in the late ’90s they were as scarce as credible Bigfoot sightings. But there are enough similarities to make a value investor wonder if he’s fallen down a rabbit hole or maybe a wormhole.

Valuations are certainly high and Silicon Valley appears to be on a bender again, although most of the silliest valuations are for companies that have yet to see the public market (Snapchat worth $15 billion? Really?).

Another similarity is the rapidly appreciating value for the dollar although I’m not sure it means exactly the same thing today as it did back then. Back then it was a US economy growing at 4% that attracted capital to the US and pushed the dollar higher. Today it is more a matter of other economies repelling capital and forcing it into the US despite a rather meager recent growth trend.

I’m on record as saying that a strong dollar is good for America and I haven’t changed my mind but the rate of change is a bit unnerving. I’ve been around long enough to remember previous times of rapid currency changes and the crises they provoked. Bad things tend to happen when currencies are moving around so quickly that market participants can’t adjust.

It isn’t a rising dollar that is bad; it is high currency volatility that creates uncertainty. Prime example #1 is the fate of US multinational companies’ earnings. With a couple of trillion dollars of balance sheet cash sitting offshore to avoid US taxes, these companies are faced with a decision about what to do with that cash.

If it has been sitting in Euros — or God forbid Brazilian Reals — the CFO is taking a beating on the foreign exchange market right now that has nothing to do with the underlying business of his company. And he is going to have to report that loss when quarterly earnings are announced so it probably isn’t coincidence that the dollar is surging as we near the end of the quarter.

The point is that the currency volatility is bleeding over into other markets because of the uncertainty produced by the dollar’s rapid move up. Stocks are getting more volatile because the earnings outlook has suddenly turned not just lower but very uncertain.

How much did P&G (and lots of other American companies) hedge and did they get it right? How much have other countries’ economies been affected by the higher dollar?

Is it negative or positive for growth? What will their central banks do in response? Will the higher dollar produce a debt crisis outside the US as it has in the past? How will that affect the US economy and US banks?

Uncertainty and volatility make it tougher to make long term investment decisions which explains not only the recent stock market moves but also companies’ continued unwillingness to invest.

One interesting aspect of this is the effect on the US economy. Assuming we don’t get a debt crisis somewhere — and that is far from a sure thing with so much dollar debt around the world — the rise of the dollar could be very positive for the US economy and potentially US financial assets. As companies seek to hedge their dollar exposure they have to buy dollars and they won’t be putting them under a mattress.

They will have to invest them in some fashion and in that we may see the seeds of a boom. Again, assuming someone, somewhere doesn’t blow up and kill the party. Right now the fear and uncertainty dominate but the longer we go without a problem – or if the dollar stabilizes in value — the more likely it is that the positives outweigh the negatives, at least in the long run.

In the meantime though it appears we will have to navigate through another early year economic slowdown in the US that may or may not have anything to do with the value of the dollar. The fact is that the economic data in the US has been on the weak side lately.

Just as in the last two years, we are going to have to spend the first half of the year working off the excess inventory that got built up in the second half of last year in anticipation of an economic acceleration that didn’t arrive.

And this year looks a bit worse than last year’s as inventory to sales ratios have now jumped to levels that are comparable to late 2008, not exactly a robust time in our economic history. And it isn’t all due to port issues or falling energy prices as the retail sales report showed pretty clearly this week. Sales were down for the third month in a row led by declining auto sales (-2.5%).

Sales were down across a wide swath of industries: furniture, electronics, building materials, health & personal care, general merchandise and food services and drinking places. Some of that might be due to weather – internet sales were one of the up areas – but the data is seasonally adjusted so the difference is likely small. Gas station sales were actually up 1.5% on the month as gas prices moved off their lows.

With an economic slowdown getting more obvious with every — or maybe every other — economic report and the continued rapid movement of the dollar and other currencies, the volatility in stocks and bonds seems likely to continue. Momentum — which has been a prime mover of this bull market — is waning, valuations are steep and there are a lot of profits to protect after a bull market that compares favorably with the greatest of all time.

Sentiment is still a bit frothy and insiders are selling a lot more than they are buying, aided by continued buybacks with company cash and bond proceeds. One can’t help but wonder when that great transfer of wealth, from investors to company insiders, will reach its logical and probably sad conclusion.

The lack of volatility we’ve seen the last few years was a reflection of low volatility in the economy. The economic expansion since the 2008 crisis may have been disappointing but it has been remarkably steady.

Annual GDP growth has been eerily consistent, between 2 and 2.5% for years. The last time we had such a run of consistent growth was the late ’90s — the growth rate was higher, around 4% but very consistent — and maybe it isn’t coincidence that the run in stocks is so similar.

Now, volatility in the economic data is picking up and that is being reflected across a wide array of markets, It started in the currency markets, moved to the bond markets and is now starting to infect the stock market.

The lack of volatility the last few years was also a reflection of very expansive monetary policy by the Federal Reserve. Volatility is basically the flip side of liquidity and with the end of the last iteration of QE, global dollar liquidity has been shrinking despite the efforts of the BOJ and ECB to fill the Fed’s shoes.

With the world running on a de facto dollar standard the Fed is the world’s central banker and until the BOJ and ECB find a way to manufacture dollars it is Fed policy that matters. So, buckle up because volatility is back. We’ll have to wait to see if there is any vengeance involved.