“Hell Is Truth Seen too Late”

Today Trump reminded markets that truce is not peace.

“Remember, I am a Tariff Man,” the president huffed this morning.

Meantime, Trump’s senior economic adviser Larry Kudlow acknowledged that a trade deal with China “may not get done.”

If the 90-day truce fails, expect the swords to leap from their scabbards… and the cannons to be readied.

Trump may impose 25% tariffs on all Chinese goods — if he is good to his word.

Chinese retaliation would likely be swift… and harsh.

Today’s dispatches terrified the stock market, just one day after it thrilled to this weekend’s truce.

The S&P sank 90. The trade-sensitive Nasdaq took a 283-point lacing.

Meantime, the “Open Market” Committee of the Federal Reserve is preparing to raise interest rates in two weeks.

We have presented the case that this hike could cross the “neutral” rate of interest.

In reminder, once rates cross the neutral rate they begin to pull on the economy.

They no longer stimulate, that is. Nor are they neutral.

On Oct. 3 Jerome Powell said, “We are a long way from neutral at this point.”

Not two months after announcing rates are “a long way” from neutral, Mr. Powell informed us that rates were “just below” neutral.

Has the Federal Reserve chairman been reading The Daily Reckoning?

If Powell presses ahead with the rate hike, we must conclude he is willing to play a dangerous game of chance.

But why would he risk walking into trouble?

(Jim Rickards provides the answer below.)

The Fed’s target rate would rise to 2.5% — if Powell sets the roulette wheel spinning in two weeks.

But has the Fed already crossed a dangerous line that nearly guarantees recession?

Let us step into the “shadows” for a possible answer…

The Federal Reserve hounded the fed funds rate (now 2.25%) all the way to zero post-financial crisis.

But conventional analysis of interest rate policy begins to fail at the zero bound.

But economists Jing Cynthia Wu and Fan Dora Xia were determined to penetrate the darkness at zero and below.

So they set to work upon an “alternate” fed funds rate that more faithfully mirrored monetary conditions.

As one observer explains it:

Three rounds of quantitative easing darkened the shadow rate to minus 3% by mid-2014.

But the shadow rate began a steep rise in late 2014 — over one full year before Janet Yellen raised the actual fed funds rate in December 2015.

Why did the shadow rate rise so steeply one year before the official rate?

If we therefore consider the shadow rate, the Fed began tightening not in 2015… but in 2014.

So what, you say?

It means the current tightening cycle may be far more mature — and intense — than recognized.

The Fed has undertaken 12 tightening cycles since 1955.

Each has averaged two years.

But if we account for the shadow rate… the current cycle is 4.5 years old.

The current cycle has covered the first 2.25.

But consider the shadow rate…

It is therefore 5 full percentage points off its 2014 low — far exceeding the historical average. 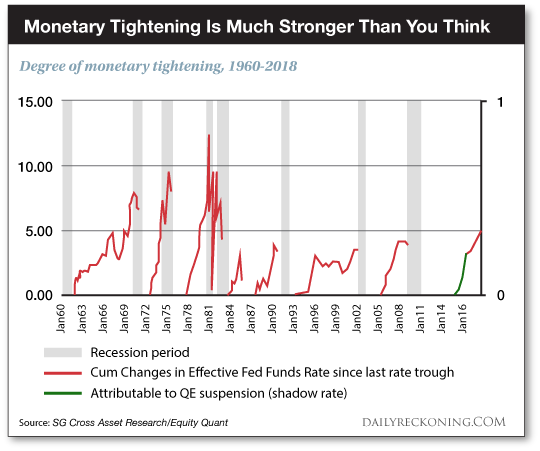 It is therefore reasonable to argue that the U.S. has already faced a “normal” tightening cycle and any additional rate hikes are taking us into territory not seen in recent times. This already may be enough for the Fed to have broken something.

The shadow rate says the Fed has already tightened too much — regardless of what transpires in two weeks.

Thus Jerome Powell may one day choke on the grim words of Thomas Hobbes:

“Hell is truth seen too late.”