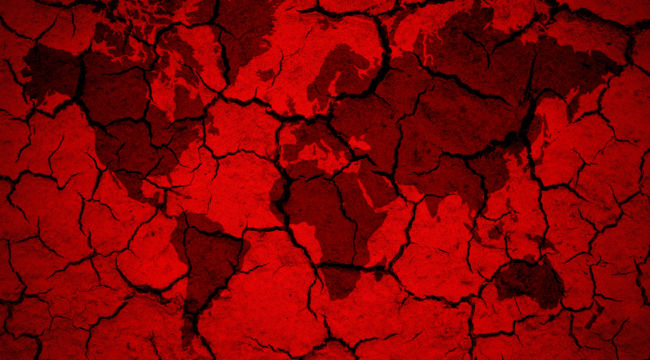 We sense that we are among unrealities…

It is as if some hinge, deep within the national psychology, has suddenly given way.

Unemployment claims are piling up. Treasury Secretary Mnuchin has suggested they may ultimately scale a depression-level 20%.

San Francisco residents are under house arrest, confined to barracks 24 hours of the day. Emergencies and food shopping provide the only officially sanctioned furloughs.

(Our spies report large numbers of lawless who are flouting the ban.)

Rumors are on foot that other municipalities — New York City included — will follow.

An identical vessel steams for the West Coast.

You Can’t Even Go to Church

Locally, a blanketing hush has fallen over the city of Baltimore. Residents have abandoned the streets. Dining and ale houses are shuttered.

Those who hazard a public appearance approach one another with suspicion… as if every stranger has a gun in his hand and murder on his mind.

Even the churches have suspended their Godly operations, their flocks scattered to the winds: 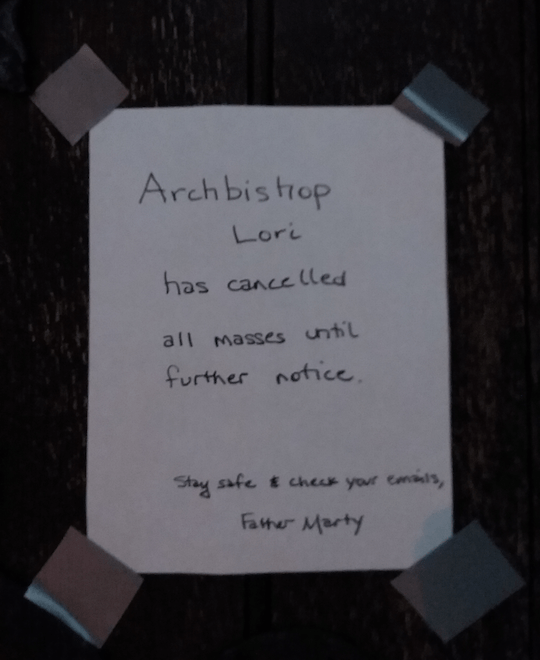 Even in wartime a fellow can take refuge in the comforting arms of God. But not when a pestilence is loose.

Yet the trees near our office are in blossom: 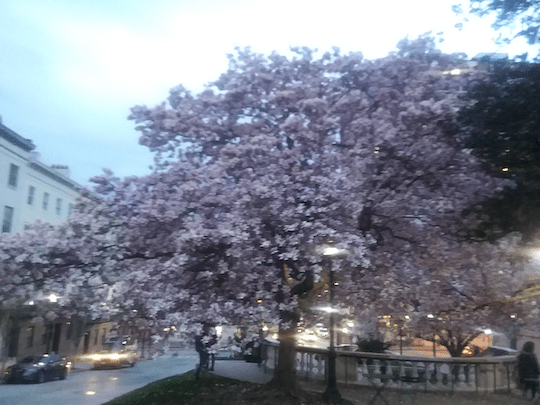 And old Washington keeps his reassuring watch over the city: 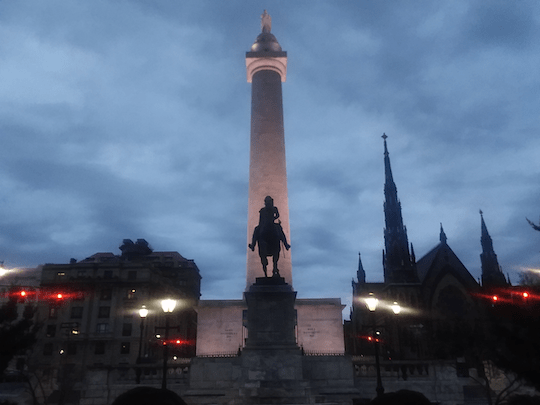 And we shall remain chained to our post… bound in solemn duty.

Three Years of Gains Wiped Out

The stock market went to the devil again today.

Thus all market gains since Mr. Trump assumed his office are eliminated — three years of gains into the furnace.

“We’re only about halfway there,” hazards one trader. That of course being the bottom.

Gold, meantime, absorbed another slating today, down $30 and change.

The reason is the promise of economic “stimulus” (more on which below).

The real infection rate and death rate may be 10 times the official statistics… If you want to see how bad things can get, study the “Spanish flu” pandemic of 1918–20. Over 50 million dead.

And while the stock market was thundering down, Jim’s readers enjoyed the opportunity to nearly triple their money with one of his recommended trades — in one single day.

We presently confront a springtime not of growth and life but of sickness and death.

The president — after all — let slip the other day that fortunes may only swing in August.

We need to shut it down now… This is the only answer… America will end as we know it. I’m sorry to say so, unless we take this option.

What precisely constitutes “this option”?

Chaining down the entire economy for 30 days. All gears of commerce must wind to a complete and immediate 30-day halt. More:

The hotel industry and the restaurant industry will go bankrupt first. Boeing is on the brink, Boeing will not survive without a government bailout… Capitalism does not work in an 18-month shutdown, capitalism can work in a 30-day shutdown…

Every hotel is going to be shut down in the country… If we allow this to continue the way we have allowed it to continue, every hotel company in the world is done. No business can survive a period of 18 months without revenue.

Will the president heed this fellow’s counsel?

Mr. Trump has now declared himself a “wartime president.”

The Defense Production Act is:

An Act to establish a system of priorities and allocations for materials and facilities, authorize the requisitioning thereof, provide financial assistance for expansion of productive capacity and supply, provide for price and wage stabilization, provide for the settlement of labor disputes, strengthen controls over credit and by these measures facilitate the production of goods and services necessary for the national security, and for other purposes.

“Other purposes,” of course.

From bull market to wartime economy within the space of one month — if you can believe it.

A journalist once asked British Prime Minister Harold Macmillan what could knock his plans off the course.

The president has been washed over by events.

Meantime, the administration proposes to write Americans checks — $500 billion worth in total.

The first would go in the mail April 6 — pending congressional approval of course. The second batch would go on May 18.

The specific amounts will depend upon a family’s income and number of children in residence.

“Millionaires,” we are told, are ineligible for relief.

Meantime, we are informed the Senate has the votes sufficient to expand paid leave and unemployment insurance.

The bill has already cleared the House of Representatives. Off it goes for the president’s signature once the Senate pushes it out.

But what will the rest of us purchase with the money we are to receive?

Our colleague Byron King laments we have “silent spring” on our hands, “courtesy of one too many imports from China.”

And the shelves may run thin by summer:

My maritime friends tell me that over the past two months, over 260 large cargo ships — 10,000–20,000 containers and more per each one — were canceled or sailed partly loaded (from China). Out of over 4 million containers that “should” have shipped, 2 million — about 50% — never made it.

What you see on the current shelves — the Chinese stuff — all showed up last fall and early winter. Looking ahead, those missing containers of Chinese goods will compound future shortages of all manner of things.

Expect to start seeing the effects in April, May and June.

We hope he is mistaken. Yet we fear he is not.

We do not care one whit for this new America. Please, 1,000 times, please, return us to the former America — botched as it may have been.

But if our choices are reduced to death by coronavirus or death by hunger… we opt for the virus.

The end comes much faster.