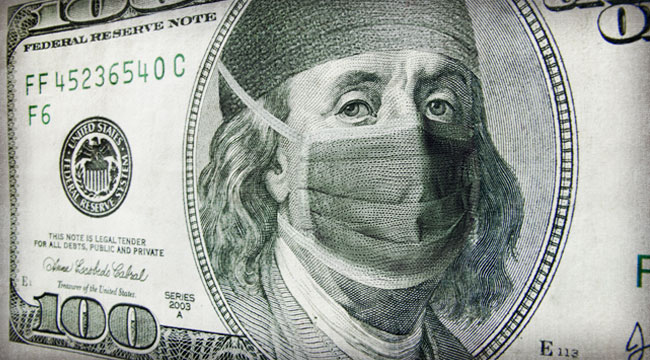 Health Care Costs: Still the Pig in the Federal Python

“Federal spending for health care programs is growing much faster than other federal spending and the economy as a whole,” according to a recent analysis from the Congressional Budget Office (CBO).

We said as much in these pages when we reminded you that health care’s portion of the federal budget keeps doubling every 20 years or so. By now it eats up 25% of the budget. Will it really be 50% two decades hence?

The words of the late economist Herbert Stein come to mind: “If something cannot go on forever, it will stop.”

Obamacare? It’s a contributing factor to the metastasis, but not a big one. Even after Obamacare is fully in place, the CBO says most of the growth in health care spending will come from Medicare. In a 2009 study, pre-Obamacare, the Mercatus Center furnished the helpful chart below showing not only that Medicare spending is projected to grow… but the CBO’s projections of future Medicare spending keep growing too. 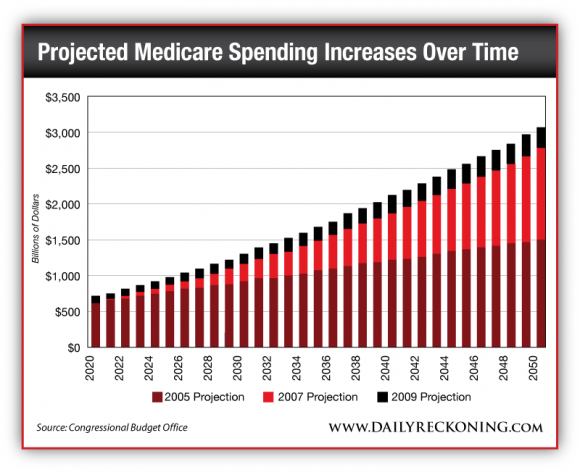 The CBO’s latest report offers a few suggestions to tame the monster. “Among those,” writes J.D. Tuccille at Reason, “are taxing, bribing and nagging people into healthier behavior, capping federal Medicaid payments (an approach that would kneecap the current push to expand Medicaid rolls), and paying less to medical providers.”

Those are all distinct possibilities. But our mind keeps coming back to a number we reported in early 2012.

All that money Uncle Sam spends on health care? One out of every six dollars is spent on the final year of life.

And here’s a new number we’ve run across: A quarter of Medicare’s budget is spent on the final year of life. And 10% of Medicare’s spending goes toward the final 30 days.

End-of-life health care is one of only two things that genuinely threaten Uncle Sam’s solvency, according to our friend David Walker, the former U.S. comptroller general. (The home mortgage interest deduction is the other.) “But we can’t have an honest conversation about it,” he said.

As we wrote 2½ years ago, all that spending is the result of a “whatever it takes” approach to forestalling the Grim Reaper’s inevitable appearance. That approach remains standard operating procedure, according to a new study from Stanford surveying nearly 1,100 doctors. It finds medical science has “its default set to maximal interventions for all patients, irrespective of the effectiveness of doing so.”

But it’s impossible to have that “honest conversation.” Remember “death panels” when Obamacare was being debated in Congress five years ago? That was a clause in the bill — ultimately dropped — providing for government-paid counseling to plan for end-of-life care.

Republicans objected that government would end up deciding who would live and who would die. It was a fair objection. But it also skirted an “honest conversation” confronting this question: Is it fair for doctors to do “whatever it takes”… and push off the costs onto a dead-broke Medicare program, to be paid for by the next generation?

The Stanford study finds many doctors questioning the “whatever it takes” approach… when it comes to their own care. That’s because doctors, in the words of the research paper, “recurrently witness the tremendous suffering their terminally ill patients experience as they undergo ineffective, high-intensity treatments at the end of life.”

But when it comes to the care of their patients, it’s still full speed ahead. The study says upfront the “current fiscal system rewards hospitals and doctors for medical procedures and providing high-intensity care to terminally ill persons.”

Indeed, the number of Medicare patients who saw 10 or more doctors in the final six months of life grew 12% from 2003-07, the most recent figures available. The number of days those patients spent in intensive care also grew.

We don’t know when the cost curve will reach the breaking point. But we know it will. When the flow of “free” money is shut off, maybe doctors will start having an “honest conversation” with patients about treatments that reach “a tipping point where the treatment becomes more burdensome than the illness itself,” as the Stanford study puts it.

It’s uncomfortable to think about. But we figure it’s better if you hear about it from us now than from a doctor a few years hence when someone you love is approaching his or her final days.

Ed. Note: It’s been six years since we traveled cross-country with David Walker, the nation’s longest-serving top accountant or comptroller general, then president and CEO of the Peter G. Peterson Foundation and protagonist of our I.O.U.S.A documentary we filmed at the time.

We interviewed financial luminaries such as Alan Greenspan, Warren Buffett, Paul Volcker and Paul O’Neill to help Walker sound the alarm about the truth behind the nexus between Washington and Wall Street.

At the time, the true national debt combined with unfunded obligations and promises tallied $53 trillion, a number reckless enough to “sink our ship of state,” in Walker’s words…unless we the people rose to action. A scant eight weeks after our film of the Fiscal Wake-Up Tour premiered, Lehman Bros. filed the largest bankruptcy in U.S. history, and the Great Recession followed.

That $53 trillion hole caved in on itself and is now nearly twice as deep. Ultimately, it will be your spending power that erodes.  We remember, all too well, the breezy air with which the luminaries in our film assured us the U.S. economy was “dynamic” enough to “grow” the federal government out of its debt crisis.  How? We wondered. And who?

That’s what we explore every day in the FREE Tomorrow in Review e-letter, where our contributors provide analysis, market forecast and actionable, innovative investment ideas that are responsible for – not just creating new businesses – but entirely new industries, and whole new waves of wealth creation. At the same time, these disruptive innovations destroy old industries. That’s why we write it for our readers, free of charge. You can’t afford not to get this intel. Sign up for the FREE Tomorrow in Review e-letter: CLICK HERE.