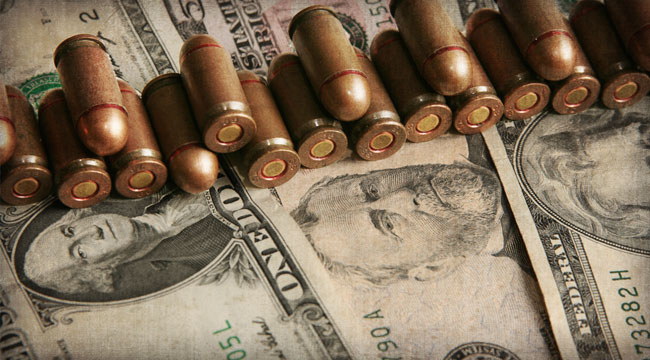 Guns, Ammo and Other Great Ways to Fight Inflation

Cast your mind back to the fall of 2008. Lehman Bros. had just failed, and for those in Washington, it was thought all the banks were about to go up in smoke.

Of all the radical policies that were enacted in response to the crisis, one of the stealthiest was the Fed’s decision to begin paying banks interest on their “excess reserves.”

This change, begun in October 2008, has netted the banking industry billions of risk-free dollars over the last five years. It’s been nothing more than a pure government subsidy. And the majority of the public has been blissfully unaware.

There are signs, however, that the Fed’s gift to the banks may be coming to an end. Below, we discuss the implications of such a move on you and your savings.

Before we do that, we must first explain what “excess reserves” are.

…the commercial banking system is also beginning to light the fuse to ignite the inflationary tinder created by the Federal Reserve.

Commercial banks are required a keep a certain amount of money on deposit at the Fed based on how much a bank holds in customer deposits. Bankers normally keep as little money at the Fed as possible. They prefer to use those funds to make loans or buy securities and earn interest.

Any extra cash held at the Fed over and above what they’re required to hold is known as excess reserves.

Up until the fall of Lehman Bros. in September 2008, banks’ excess reserves at the Fed were essentially zero. Back then, lending money as fast as possible was the name of the game.

But a month later, the central bank began paying 0.25% interest to banks on any excess reserves. The result? Five years later, banks have $2.5 trillion in excess reserves sitting at the Fed.

This means the Fed pays banks $6.25 billion a year in interest courtesy of a policy change made in a panic.

[Note: For the banks, this makes perfect sense. Since the crash, their appetite for lending risk has been nonexistent. So why not earn a riskless quarter percent by parking cash at the Fed? But here’s the real kicker. Much of that cash came to the banks as the Fed printed billions of dollars (known as QE — or quantitative easing). So banks have been receiving 0.25% from the Fed on money mostly created out of nowhere since the crash. It’s a good gig if you can get it.]

In October, the minutes of the Federal Open Market Committee meeting included a discussion of excess reserves. Specifically, it was noted that “Most participants thought that a reduction by the Board of Governors in the interest rate paid on excess reserves could be worth considering at some stage.”

Alan Blinder, though, who was once the vice chairman at the Fed, wrote in The Wall Street Journal that he interpreted the minutes’ tea leaves to really mean the voting members “love the idea” of reducing the rate being paid on these reserves.

Changing this policy would be significant and it has the potential to unleash a torrent of liquidity through the commercial banking system.

When the Fed quits paying this interest, the banks will have no reason to leave their cash at the Fed. The most reasonable option is to lend the $2.5 trillion instead. And through the power of fractionalized banking, the money supply could then be increased by up to 10 times that amount.

Needless to say, $25 trillion is a gargantuan quantity of money. The total money supply as measured by M2, for example, was just short of $11 trillion in December. Now, it’s unlikely to see the money supply triple if the Fed were to stop paying interest on these reserves. But it’s easy to imagine a significant jump in money creation if it were lent out into the economy instead of sitting idle at the central bank.

Watching the Fed, however, is only part of the inflation story. Investors who want to protect themselves must also keep a close eye on what the commercial banks are doing. And we’re beginning to see that bankers, after five years of licking their wounds, are starting to say yes again after turning potential borrowers away en masse since the crash. In other words, the commercial banking system is also beginning to light the fuse to ignite the inflationary tinder created by the Federal Reserve.

This is important because, according to Steve Hanke, professor of applied economics at John Hopkins University, commercial banks create 85% of the money supply, while the remaining 15% is created by the Fed.

And there’s evidence that commercial bank lending is heating up. In December, bank credit was up 5.9% according to the latest H.8 numbers from the Federal Reserve. This is the largest increase we’ve seen since the crash. Just as a reminder, bank credit fell 6.7% in 2009. The big December increases were in the commercial and industrial loan category, which jumped 14.1%, and consumer loans, which increased 6.4%.

Compass Point Research & Trading analyst Kevin Barker says that commercial real estate is “definitely becoming a significant driver of loan growth [and] to the extent that the banks can take advantage, it could be a tail wind to earnings.”

While investors worry about Fed tapering and rising interest rates, it’s exactly what banks need. Higher rates provide banks the incentive to lend, which will spur money creation in the commercial banking system.

Meaning as banks start to lend and rates begin to rise, the money supply could begin to grow, and in turn, price inflation could rear its ugly head.

While gold and silver are the traditional hedges to central bank inflation, it helps to think outside those metallic boxes. This can be as simple as stocking up on items that you know you’ll need in the future. Last month in The Daily Reckoning, for example, Addison Wiggin, made the case for buying five years’ worth of razor blades. (See “3 Ways to Make Your Portfolio Inflation-Proof”)

At last year’s Agora Financial Symposium in Vancouver, I mentioned stocking up on real things like cigarettes and liquor too. You may not smoke, drink, or shoot — but you can always sell or trade cigarettes, booze, and ammunition.

There are currently shortages of ammo (.22 caliber rounds sell out in minutes in my town each week), and bullet prices have exploded. Cigarettes and liquor are demonized, taxed, and seem to always increase in price.

All of these physical goods should be on your “buy” list.

Ed. Note: To learn more ways to make your lifestyle “inflation-proof” stay tuned to The Daily Reckoning email edition – a free service that goes out to over 300,000 people, every single day. And in every issue, readers are given at least 3 chances to discover real, actionable investment opportunities. It’s one of the best ways to grow your wealth no matter what the banks decide to do. Check it out for yourself by signing up for FREE, right here.