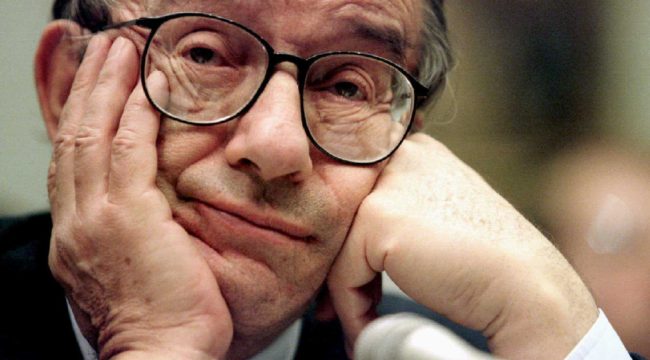 It was nearly 20 years ago to the day that Alan Greenspan delivered his famous “irrational exuberance” speech. Little did he know how far it could go. Even less has his disastrous legacy been accorded the condemnation it so richly deserves.

At the time he mused publicly about the possibility that the Fed’s prodigious money printing during the first nine years of his tenure might fuel an excess of animal spirits in the stock market, the NASDAQ 100 stood at 850.Less than 40 months later the index peaked in late March 2000 at just under 4600.

In round numbers that was a 5.5X gain in the blink of an eye. It was a prelude to all the madness since then and the mania that has flared up once again in the past few weeks.

In March the Maestro persuaded his colleagues to raise interest rates by a pinprick 25 basis points. But when the stock market promptly sold-off by about 7% during April-May, Greenspan’s resolve dissolved entirely.

Indeed, when the Fed announced the funds target was on indefinite hold in June, the market roared back by 10% and Greenspan’s laughable campaign to quell irrational exuberance came to an abrupt and permanent end.

So the mania that soon enveloped Wall Street became the bubble whose name could not be spoken.

Worse still, his parting thoughts on the matter are a stunning admission that in pursuit of its foggy prosperity management and wealth effects agenda, the Fed had lost all sense of its core mission to maintain sound money and financial discipline.

So doing, it had now become a wholly owned vassal of Wall Street speculators and fast money traders. Or as Greenspan explained it, “In effect, investors were teaching the Fed a lesson.”

Why yes they did, and it was this. The Fed dare not risk a hissy fit on Wall Street — least its efforts to pump up the economy via the stock market channel of “wealth effects” stimulus to spending and investment be interrupted.

Instead, better to let bubbles run their course, and then come in with monetary fire hoses at the ready when these “irrationally exuberant” bubbles finally burst.

That happened with a vengeance after March 2000. During the next 32 months the NASDAQ 100 plunged by a stomach churning78%. It endedup not far above where it had been at the time of Greenspan’s December 5, 1996 warnings six years earlier.

Indeed, as recently as February 2016, the NASDAQ 100 stood at just 4130. So after 16 years it was 10% lower in nominal terms and 30% lower in real terms than it was at the top of the bubble that Greenspan’s faithless leadership had spawned two decades earlier.

Needless to say, retail investors and homegamers in their tens of millions were wiped out when the first Greenspan bubble collapsed at the turn of the century. Some of them came back for another go after the Maestro decided to double-down on his dotcom folly and bail out Wall Street with 30 continuous months of interest rate reductions — taking the fed funds rate down to a then unprecedented1.0%by June 2003.

That unleashed the mortgage and housing mania, of course, which eventually led the market to another all-time high in October 2007. Then came the second thundering crash in the fall and winter of 2008-09 when55% of the S&P 500’s value vaporized in what amounted to about 25 trading days.

Those homegamers who had ventured back into what was now a pure casino got carried out on their shields for the second time in eight years — and most have never come back. In fact, most of the baby-boom generation have had their savings wiped out in the casino that Greenspan enabled during the two crashes he fostered.

Moreover, what is left in the stock markets are mainly hedge fund gamblers, ETF traders and robo-machines. And their capacity for irrational exuberance far exceeds what existed in December 1996.

That proposition was dramatically on display during yesterday’s market eruption, when in just afew seconds around 1:30 PM upwards of $3.5 billionworth of e-mini contracts were crossed, sending the machine-driven market into a frenzy of buying; and frenzy is the correct term because they bought everything — bonds, stocks, gold and the VIX.

But the point here is not merely to forewarn that another great stock market crash is imminent. Outside of a few thousand Wall Street gamblers, that impending shock is obvious enough to most halfway conscious observers.

The serial bubbles of the Greenspan era have given rise to a mutant form of financial engineering. It’ll continue until the Fed’s destructive regime of Bubble Finance is ended, when America can get back to real investment and real jobs, not what prevails today.

In the meantime, we are in the midst of a pure price-to-earnings (PE) multiple expansion spree that is disconnected from the global and domestic economy and bears no relationship to earnings whatsoever.

So earnings are down 16% from the Q3 2104 peak — even as the stock market has risen  nearly 14% over the same two year period. The magic of course is in the PE expansion. It was already at a historically high 18.5Xin September 2014, but after Wednesday’s manic blow-off now stands at 25X.

That truly does represent the nosebleed section of history — notwithstanding the endless efforts of Wall Street brokers to suggest otherwise.

Stated differently, the market is now being valued 60% higher than it was even during the period of most intensive money pumping under QE. That is, the gamblers and robo-machines have been effectively doubling-down on what was already a vastly inflated stock market.

The casino has truly come unhinged. Accordingly, the Big Short from last time around will soon prove to have been only a warm-up.