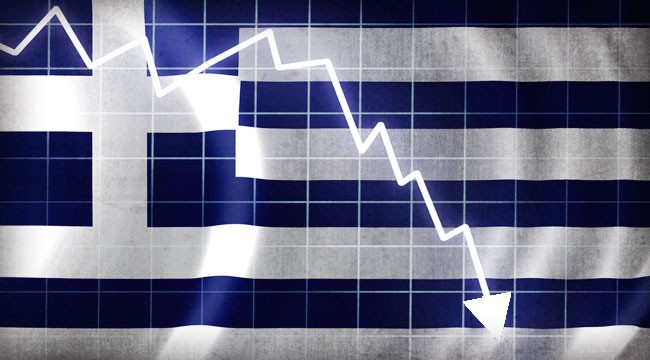 Greeks Turn to Gold on Bank Bail-in and Drachma Risks

The Greek stock market is down 36% year to date; the risk of global contagion in the event of a Greek exit is very real. Ordinarily such a crisis would require a massive coordinated effort from global stakeholders, perhaps directed by the IMF or some other pan-national financial body. But not in this case; the rhetoric is nationally-based and biased without unity of purpose across finance ministries.

Recent official soundings from the UK and German governments saying that exposure to Greece is limited only underscores the depth of denial, ignorance and lack of consensus that exists within the euro area. A Greek exit from the euro would profoundly weaken the euro experiment and create a dangerous precedent for all future crises in the region.

The European economy is the largest middle class economy in the world. With over 400 million relatively affluent consumers it represents a massive portion of the net global economy and as such a breakup of part of it would be felt across the world in credit spreads and capital decisions for years to come.

This would not have been because of Greek exit, but rather because of the inability of the authorities to manage the crisis as risks initially built up, then as bail outs were designed and implemented and then as these efforts surely failed.

We are witnesses to an epic failure of planning, statecraft and social justice. Regardless of where your politics lie, these elements are critical for a modern globally connected economy to function.

Sadly, the geopolitical backdrop is one of suspicion and hostility in the form of a festering proxy war between western and Russian interests in Ukraine and regional crisis and humanitarian catastrophe in the middle east as Syria and Iraq descend into stateless anarchy. These factors reduce the odds of a successful solution in Greece being found in time.

The share value of Greek banks cratered up to 30% Wednesday alone, before pulling back on Thursday as fears grew that the new government may not intend to soften their stance now that they are in office.

In what is probably the worst performance for the sector on record, the four major banks – Bank of Piraeus, Alpha Bank, National Bank of Greece and Eurobank – all closed more than 25% lower. Athens stock exchange closed 6.4% lower.

It marks an acceleration of the losses incurred over Monday and Tuesday in the immediate aftermath of the Syriza victory. From London’s Telegraph.

Greece’s banks have lost almost 40pc of their value in the three days since Syriza ascended to power in Sunday’s election as the dual threats of a bank run and the loss of support from the European Central Bank threaten a liquidity squeeze.

Greek banks are hemorrhaging deposits. The telegraph reports, “Banks also risk a repeat of the deposit flight seen in 2012. Up to €8bn of private sector deposits has been pulled out of Greek banks since November, according to Moody’s”, adding that bank deposits have fallen 5% in the last two months.

The Financial Times paints an even more dramatic picture of bank runs and capital flight.

The real danger is that the Greeks themselves lose confidence. There are tentative signs that money is again being sent abroad, as it was in mid-2012. Nikolaos Panigirtzoglou at JPMorgan points out that €350m was sent from Greece to Luxembourg money funds since the start of last week. Extrapolating to all cash flight, he estimates as much as a 10th of Greek deposits may have left already this year. If a Greek bank panic develops it will strengthen the German hand, and make negotiations that much harder.

In the event of any or all of these possibilities, gold and silver bullion will perform well as a currency of last resort.

Greek coin and bullion dealers with whom GoldCore spoke, confirmed an increase in demand for gold coins and bars in recent weeks and since the election.

GoldCore have Greek clients both in Greece and living in the UK and throughout the world. We have seen a definite upsurge in interest, inquiries and demand since the election last Sunday.

Concerns about bank holidays and also a return to the drachma have returned and Greeks are looking for ways to prevent further destruction of their wealth.

For Greeks, Storage in Switzerland remains a favoured way of owning gold.

This article was originally posted on GoldCore’s blog. Visit us right here.

Mark O’Byrne is the Founder and Executive Director of GoldCore, a leading international bullion dealer and wealth manager. GoldCore are acknowledged experts on precious metals and global macroeconomics and our research is respected as analytical, informative and enlightening.