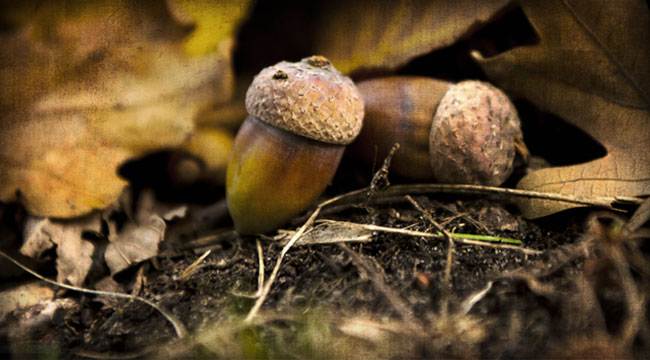 Great Returns from a Thankless Chore

It is a small and thankless matter to plant a tree. Oaks, for example, usually grow so slowly that the planter rarely lives to see them in graceful maturity. Still, people plant trees.

Jean Giono tells the story of a man who – for no reasons but his own – began planting oak trees in the South of France.

“About forty years ago I was taking a long trip on foot over mountain heights quite unknown to tourists in that ancient region where the Alps thrust down into Provence. All this, at the time I embarked upon my long walk through these deserted regions, was barren and colourless land. Nothing grew there but wild lavender.”

There were no parks commissions, no botanists, no taxes, no fees. There was just a lone shepherd, aged 55.

There were few trees and fewer men in that desolate area. But a solitary shepherd had an idea. He began carrying with him a bag of acorns and a heavy iron rod. As he tended his sheep, he poked the iron bar into the ground and dropped an acorn into the hole. This he did for decades. There was no re-forestry program. There were no government grants. There were no parks commissions, no botanists, no taxes, no fees. There was just a lone shepherd, aged 55. Mr. Giono met him before World War I.

His name was Elzeard Bouffier. He had only the company of his sheep and his dog. He had never studied environmental science, nor perhaps ever even gone to school. But he could see that the land had changed since his youth. The area had been rich in grass and trees…animals…and human beings. You could tell because whoever had once lived there had left behind their stone houses on the hillsides. They had apparently overgrazed the grass and overworked the land. Worst of all, they had over-cut the forests that once grew there. Of the twisted oaks that used to provide shade and hold the moisture close to the ground…only a few remained.

Bouffier asked no one’s permission. He put no issues or referendums on the ballot. He rallied no citizens and spoke to no town meetings. As far as we know his name never appeared in the paper – until after he was dead. But he went about the work that he had taken up himself…with no pay, no thanks, and not even any notice.

He planted thousands of oak trees, many of which died at first. And for the rest too, progress was as slow as an oak. But gradually, more and more took root. And each one provided more shade…more moisture…and a more hospitable place for other life to take root. Animals returned…and then hunters…and then game wardens.

“In 1933 [Bouffier] received a visit from a forest ranger who notified him of an order against lighting fires out of doors for fear of endangering the growth of this natural forest,” Giono reported. “It was the first time, the man told him naively, that he had ever heard of a forest growing of its own accord. At that time Bouffier was about to plant beeches at a spot some twelve kilometers from his cottage. In order to avoid traveling back and forth – for he was then seventy-five – he planned to build a stone cabin right at the plantation. The next year he did so.”

The re-growth of the ‘natural forest,’ was a wonder to everyone. In 1935 a government delegation came to examine it. They didn’t know what to make of it. They merely placed it under government protection.

By now the oaks were 20 to 25 feet tall. The slopes were covered with them. And the old man was still at work, planting his stealth forest.

“I remembered how the land had looked in 1913,” Giono wrote. “A desert…[but] Peaceful, regular toil, the vigorous mountain air, frugality and, above all, serenity in the spirit had endowed this old man with awe-inspiring health. He was one of God’s athletes. I wondered how many more acres he was going to cover with trees.”

By 1945, another war had passed. Bouffier was 87 years old and still at it. He had spent the second war as he had spent the first one. While millions of armed men tried to improve the world by killing each other, the good shepherd continued to improve his world. And in the process he improved ours.

“In 1913 this hamlet of ten or twelve houses had three inhabitants. They had been savage creatures, hating one another, living by trapping game, little removed, physically and morally, from the conditions of prehistoric man. All about them nettles were feeding upon the remains of abandoned houses. Their condition had been beyond hope. For them, nothing but to await death – a situation which rarely predisposes to virtue.

“[Now] everything was changed. Even the air. Instead of the harsh dry winds that used to attack me, a gentle breeze was blowing, laden with scents. A sound like water came from the mountains; it was the wind in the forest; most amazing of all, I heard the actual sound of water falling into a pool. I saw that a fountain had been built, that it flowed freely and – what touched me most – that someone had planted a linden beside it, a linden that must have been four years old, already in full leaf, the incontestable symbol of resurrection.

“On the site of the ruins I had seen in 1913 now stand neat farms, cleanly plastered, testifying to a happy and comfortable life. The old streams, fed by the rains and snows that the forest conserves, are flowing again. Their waters have been channeled. On each farm, in groves of maples, fountain pools overflow on to carpets of fresh mint. Little by little the villages have been rebuilt. People from the plains, where land is costly, have settled here, bringing youth, motion, the spirit of adventure. Along the roads you meet hearty men and women, boys and girls who understand laughter and have recovered a taste for picnics. Counting the former population, unrecognizable now that they live in comfort, more than 10,000 people owe their happiness to Elzeard Bouffier.

“When I reflect that one man, armed only with his own physical and moral resources, was able to cause this land of Canaan to spring from the wasteland, I am convinced that, in spite of everything, humanity is admirable. But when I compute the unfailing greatness of spirit and the tenacity of benevolence that it must have taken to achieve this result, I am taken with an immense respect for that old and unlearned peasant who was able to complete a work worthy of God.

“Elzeard Bouffier died peacefully in 1947 at the hospice in Banon.”

Bill Bonner
for The Daily Reckoning
2007

Ed. Note: This essay was first featured in today’s Daily Reckoning email edition – along with a full analysis on doing good by investing in the right company. It’s just one of the many free perks of being a subscriber to The DR. Sign up for FREE right here, and get a host of great benefits, including regular opportunities at real, actionable investment tips.